Home Australia How to enjoy Mornington Peninsula in the rain
Australia

How to enjoy Mornington Peninsula in the rain

Getting out of bed at 6am ranks pretty high on my list of least favourite activities but that’s what I’m doing on Thursday morning because I’m off on a tour of the beautiful Mornington Peninsula – hooray!  Hold on, is that rain I hear?  Oh yes on what has otherwise been a beautiful week – perhaps even a little too beautiful for my taste – the one day that I wake up and it’s raining is this day.  Mornington Peninsula day.  I decide to comfort myself with my knowledge of the changeable weather in Melbourne at this point but, just in case, I do grab a jumper and umbrella on my way out of the door, which turns out to be the best impulse decision I’ve made in a long time.

As you might’ve gathered from the title of this post it rained on the Mornington Peninsula on Thursday.  It rained everywhere and almost all of the time.  The fact therefore that the majority of the scheduled tour activities were outdoors seemed pretty problematic but I’m here now on the other side to show you that we survived (yes all of us) and not just that, we had fun.  Maybe it was the sunny disposition of our tour guide (shout out to Kurt!) or the resilient nature of our group but we refused to let the weather stop us.  So if you ever find yourself on the Mornington Peninsula in less-than-ideal weather conditions take my advice and don’t let it spoil your day.

With Arthur’s Seat and the constant drizzle, you’d be forgiven for thinking you were in Scotland.  This spot was named by John Murray when he arrived on his ship in 1802 because he thought it resembled the Arthur’s Seat in his home town of Edinburgh.  Totally understandable if you discount the fact you’re overlooking a stretch of beautiful Aussie coastline and not a city.  I mean essentially what they have in common is being on a hill, which makes me think that acting Lieutenant Murray just wanted to name everything after a place in Scotland.

Hey at least the rain added to the authentic feel of a Scottish summer’s day.  All we needed was for the temperature to be ten degrees lower and the sea a little less blue before we had something resembling the Scottish coastline… maybe. 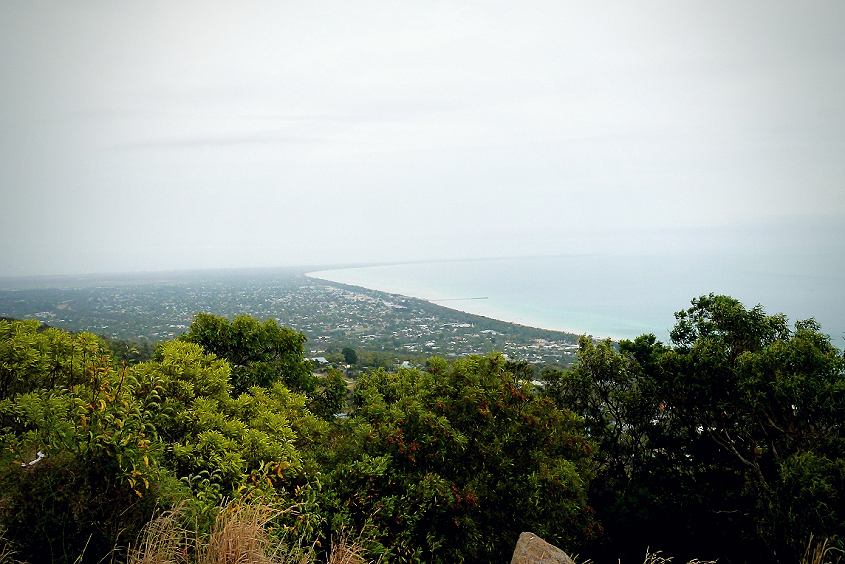 SOAK UP THE ATMOSPHERE AT POINT NEPEAN

There’s a undeniably spooky feeling you get at Point Nepean Quarantine Station and it’s only intensified on a gloomy day like ours was.  The station operated from 1852 right up to 1980 and has the oldest buildings in Australia to be built for quarantine purposes.

During the Gold Rush the amount of people arriving to find their fortune in Melbourne dramatically increased and due to the overcrowded conditions on ships and the isolation caused by being away for months at sea many of the passengers arriving into the country were suffering from serious illness and disease.  Not wanting them to infect the general population they were quarantined at Point Nepean in this specially built facility until they either recovered or died. 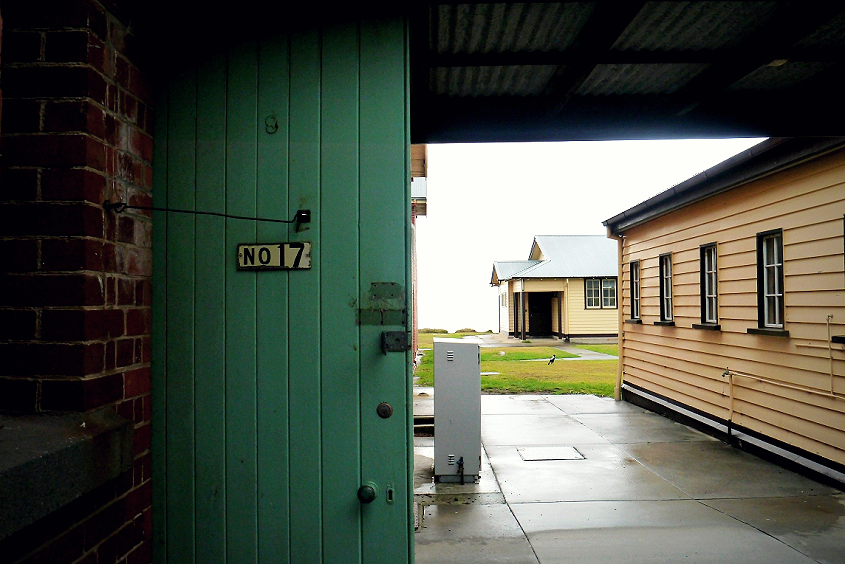 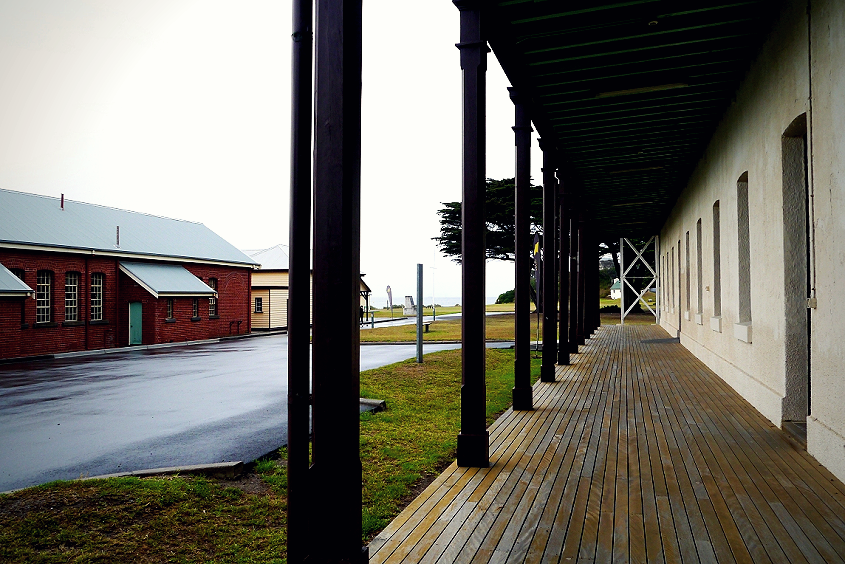 ENJOY YOUR OWN PRIVATE BEACH AT LONDON BRIDGE

Well private except for the other people on the tour, but you rarely get an opportunity in Australia to have a beach to yourself and it shouldn’t be underestimated.  Just down the coast from the lookout at London Bridge is also where an Australian Prime Minister once disappeared.  Yes you read that right, in 1967 Australia’s 17th Prime Minister Harold Holt went for a swim on a beach near Portsea and never came back.  His disappearance sparked the biggest search and rescue operation in Australia’s history but his body was never found.  Some people believe he was picked up by a Chinese submarine, others think he was assassinated by Soviet Russia, and of course if you enjoy the classic US hiding experiments with alien technology narrative, they can be blamed for this one too. 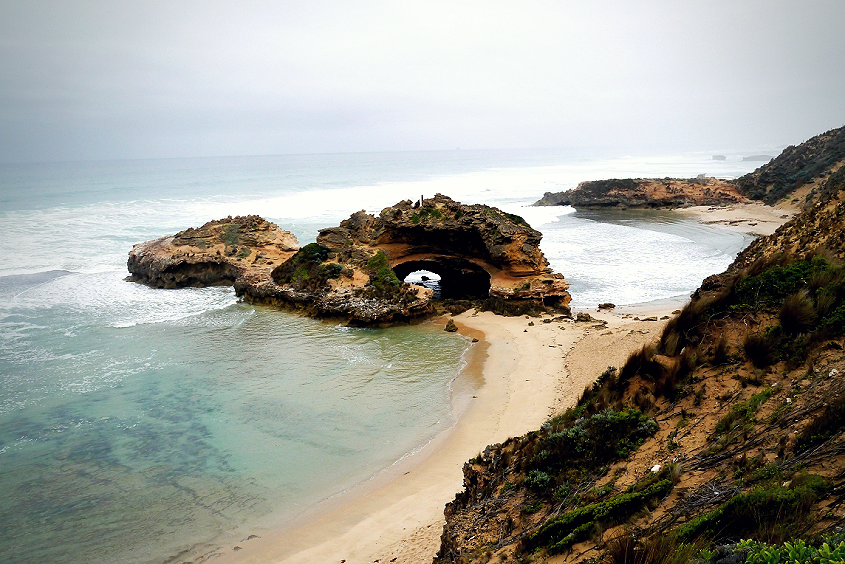 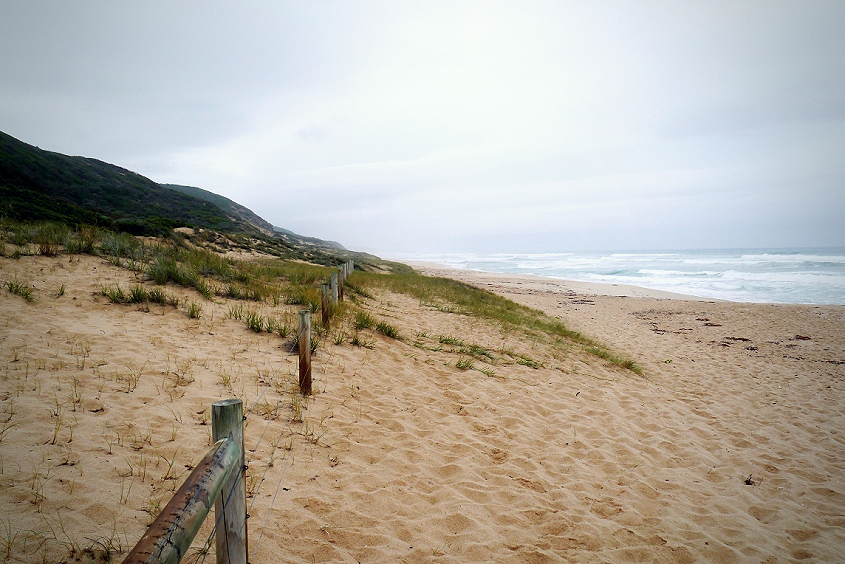 Imagine being the key word here because most of us can only dream about being rich enough to own one of these.  The bathing boxes line the coast of Port Phillip Bay all of the way from Mount Eliza to Portsea and so it’s impossible to visit them all in a day (unless maybe that’s all you do?)  Because of this it’s left to the discretion of the guide to take you to their favourite spot to see the boxes and this was where we ended up – on Rye Beach.  I couldn’t fault the choice. 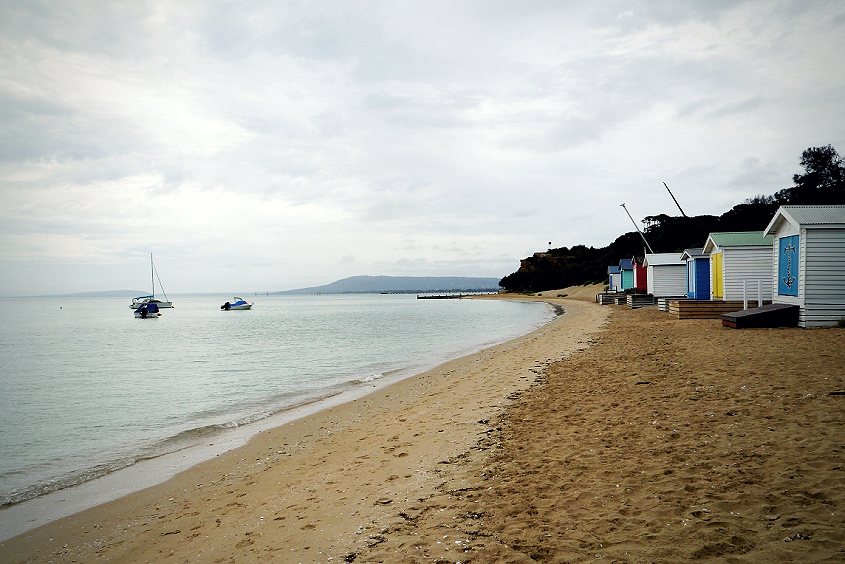 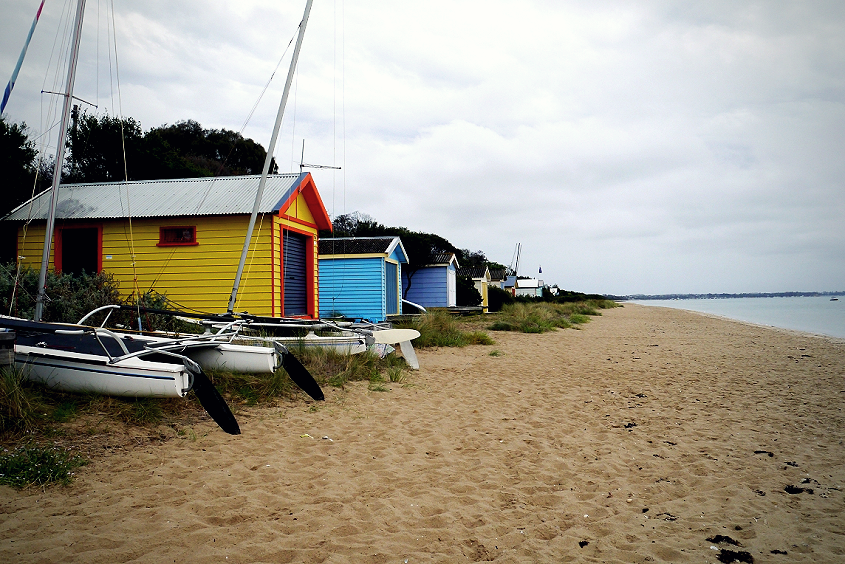 EAT, DRINK AND BE MERRY (INSIDE) AT THE PIG & WHISTLE

In some people’s eyes the best place to enjoy the rain is from indoors and (I might be biased) but there’s nowhere better to enjoy lunch than an English-style country pub.  Add the constant drizzle to the mix and I really was starting to feel at home.

Just next door is the Bayview Estate Winery and Cellar Door, where everyone got very excited because we knew there was wine waiting to be tasted.  Several of the wines are produced on site from the grapes growing out the back and a couple are from New South Wales.  As somewhat of a wine novice I’m surprised I could actually detect a difference between the ones that are the same colour!  However I doubt this will be the case beyond this experience as on its own every white wine and every red wine pretty much taste the same to me.  I was secretly thrilled when the couple next to me divulged that they enjoy the $3 a bottle plonk from Woolworths (now there’s a bargain!) 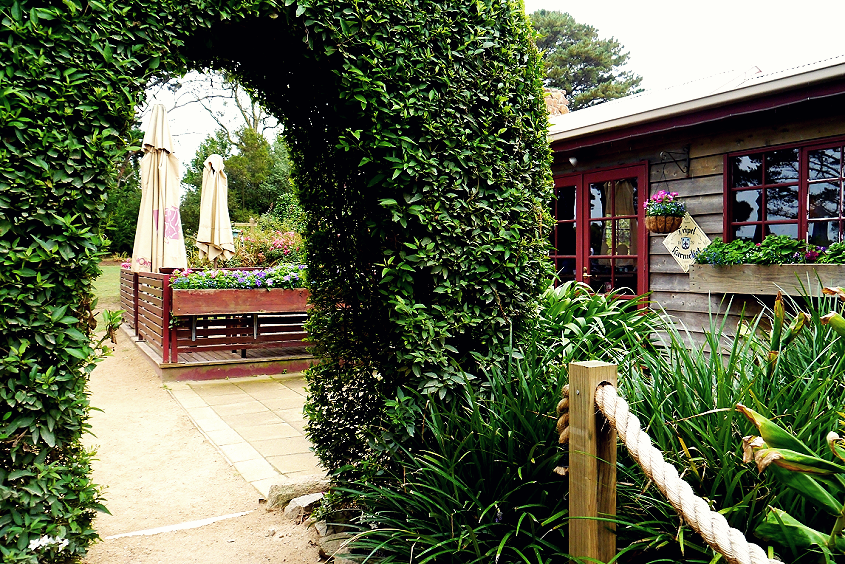 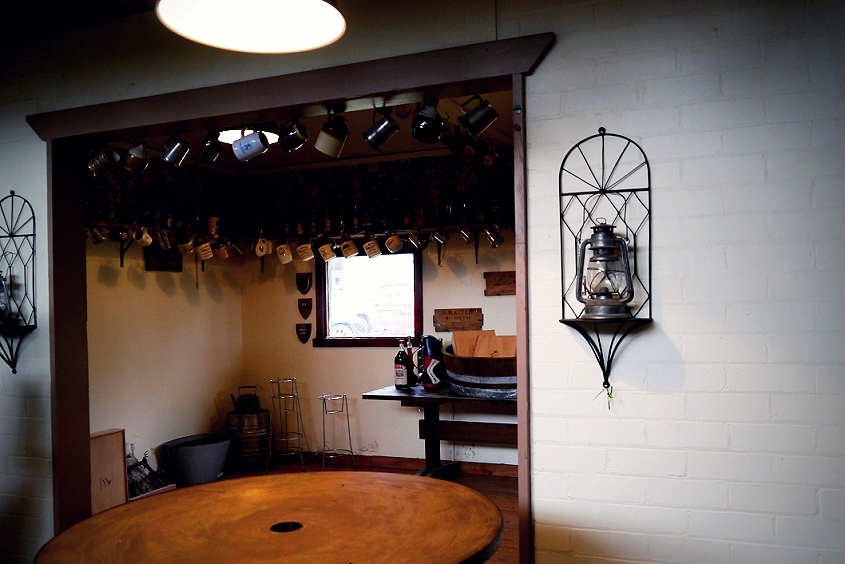 Have you ever tried to carry three things in two hands, whilst requiring a fourth hand to actually do stuff with?  Well it was time to find out how good I really was at multitasking when we went strawberry picking in the rain.  First of all you should know that everything about Sunny Ridge is pretty glorious even if it can’t always live up to its name.  When you enter and walk through the cafe and shop to get to the picking area the sweet smell is almost enough to make you say “forget this picking nonsense I’ll just have all of your baked strawberry goods right now”.

Somehow though there I was in the (now quite heavy) rain balancing an empty plastic container and umbrella in one hand and a camera in the other and realising I required a further two hands to focus aforementioned camera and pick strawberries to put in the punnet.  The result was a lot of blurry strawberry photos but really the strawberries were my primary concern so I can’t say I have any regrets. 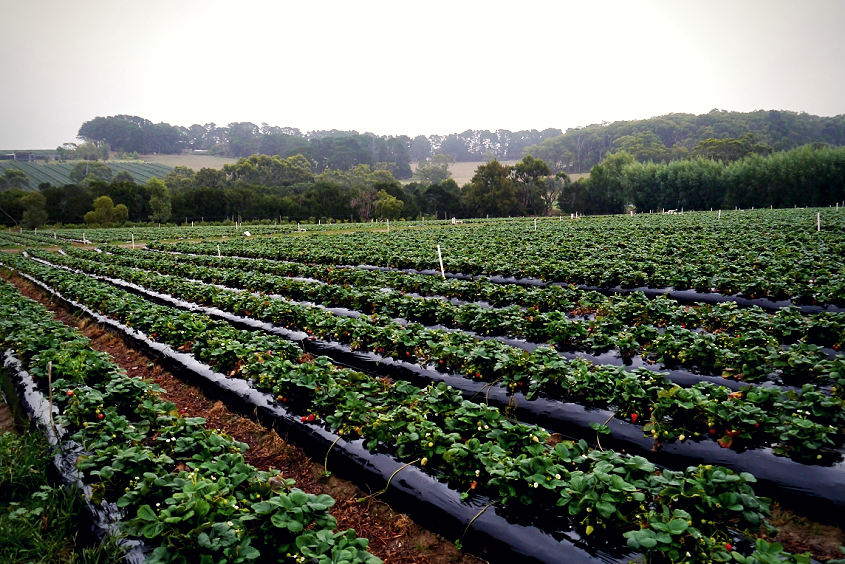 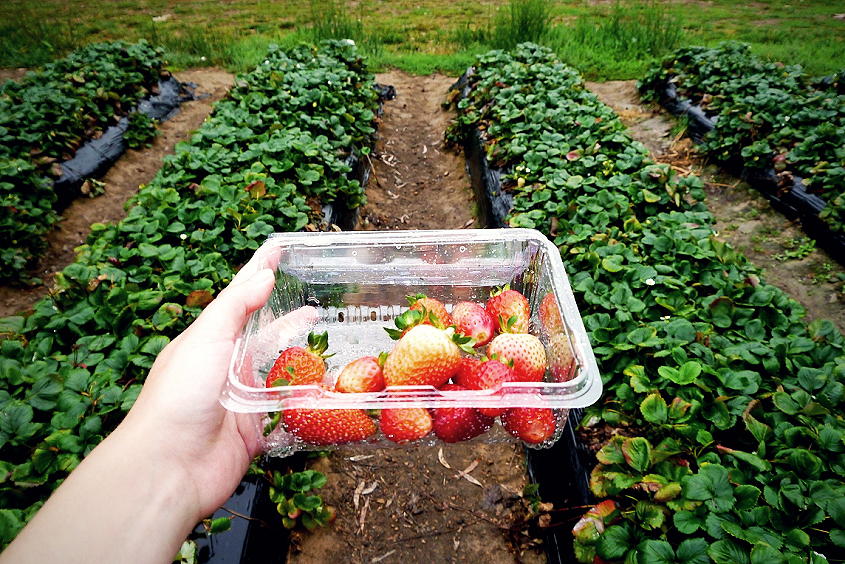 CHALLENGE YOURSELF AT THE ENCHANTED ADVENTURE GARDEN

If you’re a whizz at mazes you might like to amp up the difficulty by trying out one in a thick fog.  Granted I was able to escape from the adult maze at the Enchanted Adventure Garden just before the mist crept in, which was lucky as I found it hard enough to get out without that added difficulty.  Perhaps it isn’t the best idea to take on the challenge 15 minutes before you’re due back at your meeting point but the inflated sense of achievement from conquering the children’s maze and the spooky maze must have got to me.

Despite it’s name the Enchanted Adventure Garden isn’t just for kids.  Or at least I don’t think it’s just for kids but maybe that’s because the only times I feel like an adult are when I’m doing the laundry or have to speak to another adult on the telephone.

Proving my point further, the amount of enjoyment I got from the Hall of Mirrors probably isn’t in line with an adult level of enjoyment for that activity, as was my extreme level of fear that almost caused me to chicken out of going into the Spooky Maze completely.  In my defence, we were told it was “genuinely very scary” by tour guide Kurt which meant that I RAN through the whole thing with my heart thumping convinced someone was about to jump out of me.  Perhaps this was a very clever move on his part to actually make the Spooky Maze terrifying or perhaps, as he put it, he’s “just a wuss”. 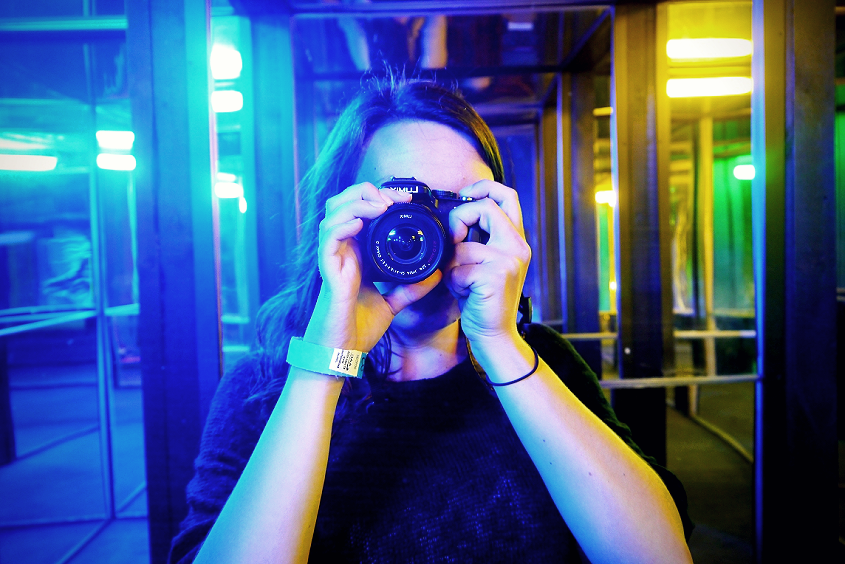 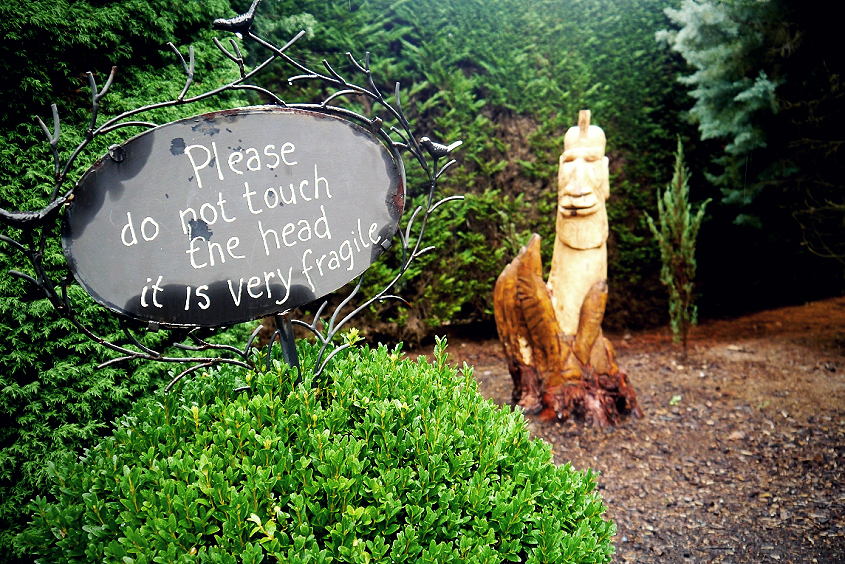 Words to live by…

I took the Mornington Peninsula Ultimate Tour run by Bunyip Tours which visits all of the places mentioned in this post.

The tour was excellent and I’d like to extend a special thanks at this point to our tour guide Kurt.  I enjoyed being your second-in-command despite having to clean your sunglasses.*

I was invited on this tour as a guest of Bunyip but all opinions remain my own. 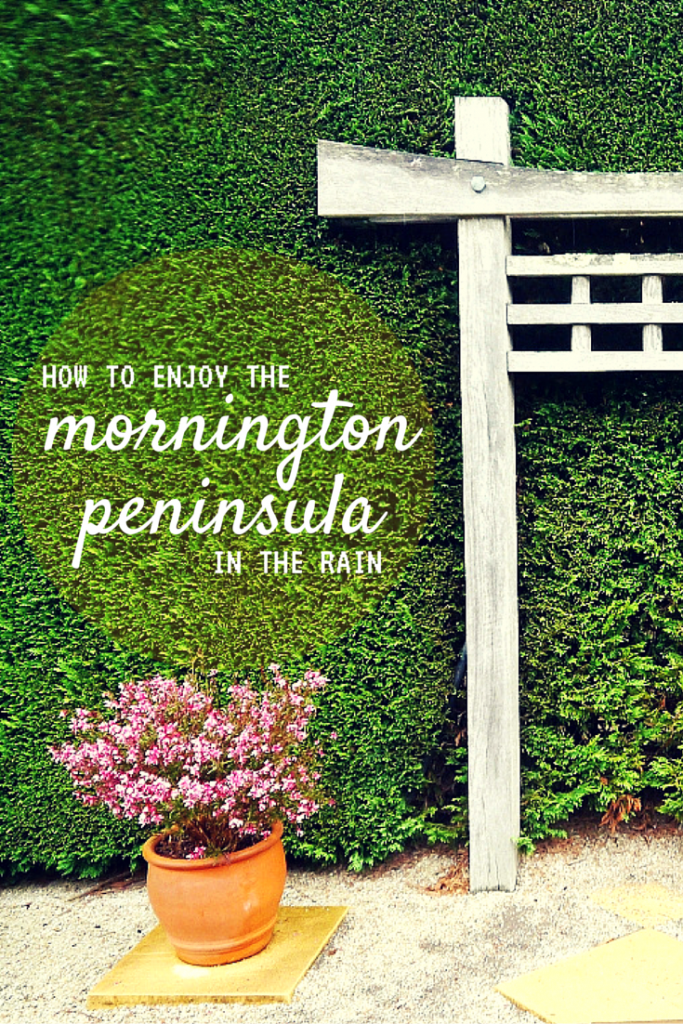 5 reasons to add the Grampians to your bucket list

What it’s like to live sustainably on a Australian Farm