Chickens are a great investment

Chickens have been the biggest revelation for me during my WWOOFing experience.  I was incredibly surprised by how many eggs they produce and how easy they are to keep.  Initially they require shelter and some form of protection from foxes at night (you’d either need to shut them inside or get an electric/fox-proof fence).

The extent of our care of the chickens is to feed them once a day with a couple of scoops of grain, top up their hay, shellgrit and water when required (but this isn’t daily) and give them the compost food scraps from the kitchen.  In return we collect around 8-12 eggs per day from around 25 laying hens on average.  Depending on the breed of hen the egg production will slow down as they get older and eventually stop completely but they should be good to lay consistently for 2-4 years.

In the last couple of days we’ve had two minor heart-attack inducing moments.

The first one happened two days ago when in the morning me and one of the other WWOOFers moved the calves down the field in the morning so they’d have more grass.  We adjusted the fence back to it’s regular height – which is about thigh high – and continued about our day.  When we went out to feed the chickens in the early evening we were shocked to find one of the calves roaming around the farm.  This was slightly alarming at first, especially when we approached her and she decided to full-speed gallop out of sight, but we soon realised that if we shut the gate she couldn’t escape.  After seeing her roaming free we expected to see the electric fence had fallen from where we’d adjusted it earlier but it was in the exact same place and the other calf was still inside staring at us thoroughly unimpressed that his mate had been out having a wail of a time without him.  We still don’t understand how she got out but she did not want to go back and after some unsuccessful attempts at herding we eventually managed to tempt her with her evening feed.

Our second startling moment came yesterday when three of us were cooking in the kitchen and looked out of the window to see a bull staring right at us.  He’d got over the fence from the field next to the farm – but the fence was still intact!  When one of us (not me!) was brave enough to go out there and approach it turned and bolted right through the fence back into it’s field but this time smashing a bull-shaped hole in the fence!  How it got through with no damage in the first place and why it decided to come over is still a mystery. 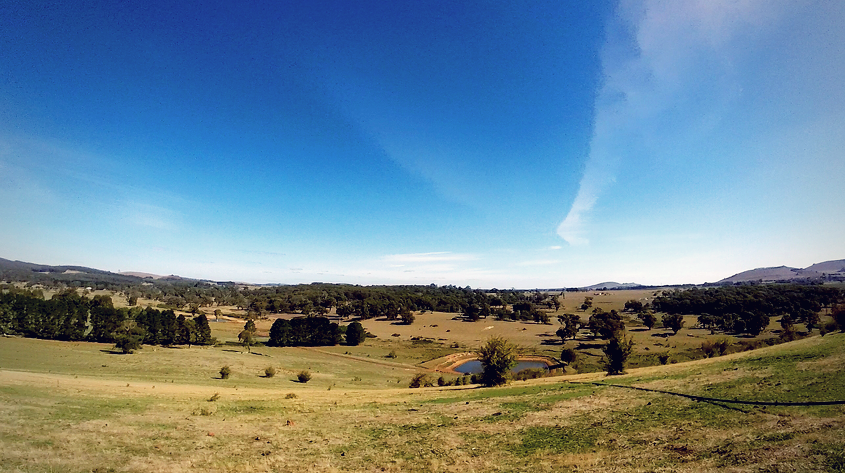 You have to co-exist with venomous spiders

There are huntsman everywhere.  We see a few every night in our cottage on average but although they can give you a nasty bite they’re actually a blessing to have around because they eat the other venomous spiders and (biting aside) they’re harmless. Just slightly terrifying because they roam around rather than confine themselves to a web.  However we’ve also come across a few of the venomous white tails.  One of the other WWOOFers found one sitting on his shorts when we went to put them on one morning and since then we’ve been putting everything in our bags and keeping them shut.  White tails like to hang out in warm areas of bedding so I’ve now added in a routine before bed whereby I check inside all of the duvets, pillowcases and pyjamas.  FUN.

Being a farmer is hard work…

We are only on a tiny farm of 5 acres.  There are only a handful of animals and a few fruit and veggies growing as the farmer mostly makes his living by using his produce to create the wares sold at the twice weekly markets.  We’re not currently selling anything else as straight up produce so there doesn’t need to be an abundance of it and the female calf hasn’t started producing milk yet so that’s not a task that needs to be done.  Even with the little amount that seemingly needs looking after it’s still quite a bit of work and only really possible with at least 3 people (there are 4 of us currently including 3 of us WWOOFers).  The amount of baking, setting up and washing up that is required to make the market run smoothly would take a day or two in itself for just one person!  The weeding is neverending and then there are all of the daily tasks required to look after the animals.  When it comes to moving the enclosures this can also be quite a lot of work,

… But it is rewarding

The moment from WWOOFing so far that sums this up best is when we were weeding the other day and came across a huge watermelon that looked like it was ready for picking.  We were keen to salvage it before the roaming chickens came pecking around but unsure if it was ripe but after a bit of googling we took the risk.  When we got inside and cut it open it looked perfect and so we looked up what we could do with some of it and settled on watermelon and gin jelly.  As we were making the jelly we tried some of it and it was honestly the most flavoursome watermelon I’ve ever tasted (the jelly was pretty delicious too!)

That was a moment when we all really appreciated the sense of satisfaction that you can get from growing your own food and making it into something that tastes amazing.  An added bonus to this story was that the farmer told us these watermelon grew out of some compost he scattered on the ground – it wasn’t even an intentional planting!

If only the UK had a more favourable climate!

Want to see a typical day on the farm? 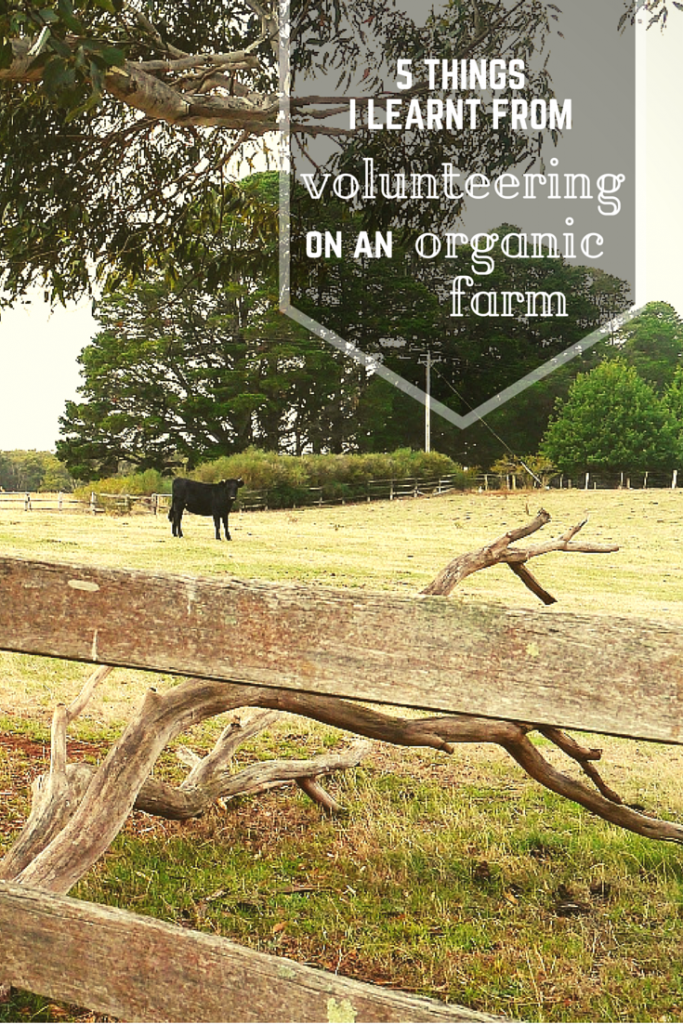 5 spots to capture an iconic photo of Melbourne

This seems like a very cool experience! My friend did something like this on a small island off of Korea (where we are teaching) but I’m not sure how much farming she actually did. She said it was a great experience, though! I would like to try it!

I think the tasks you’re given can vary greatly. Our jobs were mostly looking after the animals, tending to the garden and cooking meals. Sometimes I think you get more manual tasks such as painting and woodwork depending on where you are.

This is an enlightening post! Never tried wwoofing before but it sure looks like fun and definitely hard work!

Thanks Carla! It was both of those things. Well worth the experience, I’d recommend it if you get the chance!

I came across WWOOFING before and love the idea of living off the land, but after setting aside romantic ideals, I told myself I realistically couldn’t do it as it’s so much hard work! Thanks for sharing your experience!

I think it probably depends where you go. We were pretty lucky in that it wasn’t what I would’ve expected from a conventional farm experience ie. I always thought farmers got up with the sun but we didn’t get up until 8 most days! I think the fact that it was a small (in Australian land terms) farm and the farmer was a young guy doing it all on his own definitely contributed to that.

I would love to do something like this! But without the spiders haha, but in all seriousness I’m hoping to move to Australia by January and I guess I’ll have to learn to deal with them!

Honestly I’ve not found the spiders a problem at all until this experience. I’ve only seen one very large spider (and it was safely in its web at a decent distance) and that includes several times when I’ve been camping! In the cities you just don’t see them.

The small ones are the ones to watch for! Huntsman will give you the fright of your life but they’re not venomous and apparently they eat the other small dangerous spiders so we were quite grateful to have them around (after we got over the initial shock at their size!)

What does WWoofing mean? Looks like a lot of work but rewarding! 🙂

The acronym stands for Willing Workers on Organic Farms. It’s a scheme that matches volunteers with farms and other regional opportunities. You usually go and live at a property and help out the owners with any tasks they need doing in return for bed and board.

Looks like so much fun. I totally wanted to do some volunteering around the globe – esp w/t farm animals or in vineyards. Thanks for a witty read.

Wow, I heard about the concept of volunteering in organic farms, but never read a personal experience about it!
I totally enjoyed this!

Thanks Brenda! I haven’t seen many first-hand accounts either which was part of my motivation to write about it.

I have always been very interested in WWOOFing. Seems like such a unique, interesting and fun way to travel the world. I don’t know how I feel about the venomous spiders everywhere, but I would love working with animals and gardening!

It’s strange how quickly you get used to co-existing with the spiders (but I wouldn’t say I’m completely comfortable with them being around yet!)

You should definitely try it if you get the chance, it’s a great way to experience a completely different way of life and often meet really interesting people!

Wwoofing is rehabilitation for couch potatoes. love it!

Haha that’s definitely true! Maybe it should be prescribed? 😉