My Bali Cycling Tour Wasn’t Quite What I Expected

Thanks to the huge popularity of Eat, Pray, Love I think most of us now picture ourselves on holiday in Bali cycling through the rice paddies like Julia Roberts.  It’s a romantic notion and one that I was determined to be more than a dream, after all I really like cycling (in moderation because those seats are not kind to us ladies).

Flash forward to me in the middle of my trip to Ubud.  I’ve gotten over my culture shock and am fully loving life in Bali,  I’ve adjusted to the forty degree heat as much as I’m ever going to, I’ve got my helmet on and my bike and I’m ready.  “It’s really easy” our guide tells us, “it’s all cycling downhill”.  Famous last words. 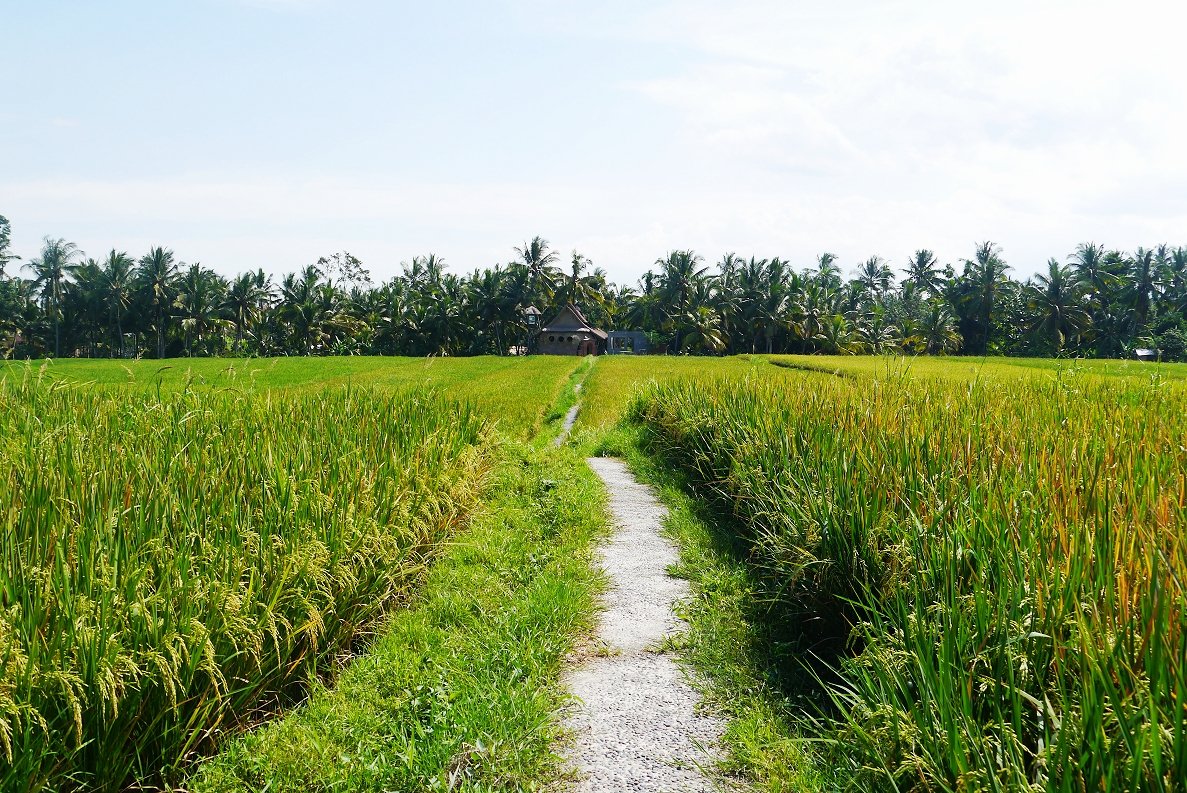 There’s only a small group of us but we’re divided into two because there’s a family with small children.  This will come to make sense later when I explain what the trip entailed but it meant that it was just me and two other women in our little group.  Coincidentally both of them were also from the UK but now live in Sydney.

We had to drive about 30 minutes out of Ubud to get to the start point for the tour so by the time we’d been cycling for another 30 minutes one of us needed a toilet break.  There aren’t exactly an abundance of public toilets in Ubud, let alone in the villages we were cycling through, so it was a trip to the bush toilet.  All fine we continue, until a few minutes later when it turns out she’d been bitten on the bum by something during the few seconds of squatting involved.  Out came the first aid kit and an unscheduled stop  to apply scream to said area, a service selflessly carried out by our tour guide (they make no mention of this on the website but it is included in the price).  At this point I’m a mixture of feeling glad I didn’t use the bush toilet and sorry for the woman who had to now ride a bike with that bite on her ass for the next few hours.  I’m also wondering whether this happened to Julia Roberts during her bicycle ride.  Somehow I think I would’ve remembered. 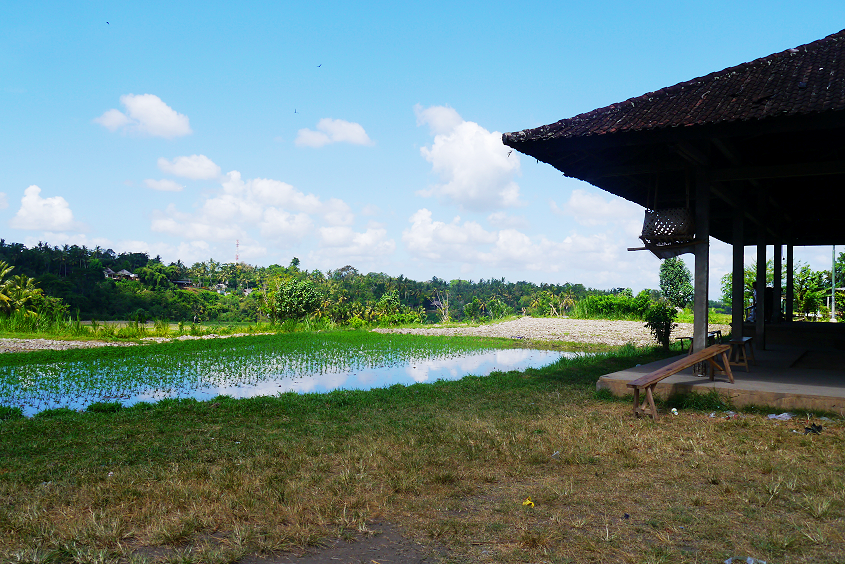 Our first stop was at a coffee plantation where we were shown all of the different herbs and spices grown to make the different flavoured teas and coffees as well as getting to do some product tasting.  Of course we were also told how they make the speciality Balinese coffee – Kopi Luwak.  This was very much news to me but basically it’s made from the faeces of the Civet cat (an animal I’d never heard of let alone seen before this).  Pretty much what happens is that these cats eat the coffee fruit and then their digestion process changes the beans in some way so that when they’re excreted they take on a different flavour.  The faeces of the cats are collected, cleaned up to reveal the intact beans and then those are ground into the most expensive coffee you’ve ever come across – yum!

But if you’re wondering what it tastes like I can’t help you.  As kind as the people of Bali are generally, the whole operation doesn’t sit right with a lot of visitors to the country, and I can see why.  We were shown the cats, which were kept in tiny cages, and told that they were only fed coffee beans… all of the time.  In the wild they would only occasionally eat them as part of a varied diet but to keep up with the demand they are basically farmed and force fed in a lot if coffee-producing places around the country.  Even the guy who apparently introduced Kopi Luwak says he now regrets it and campaigns against it but when it’s the livelihood of some Indonesian people then it’s not quite so black and white. 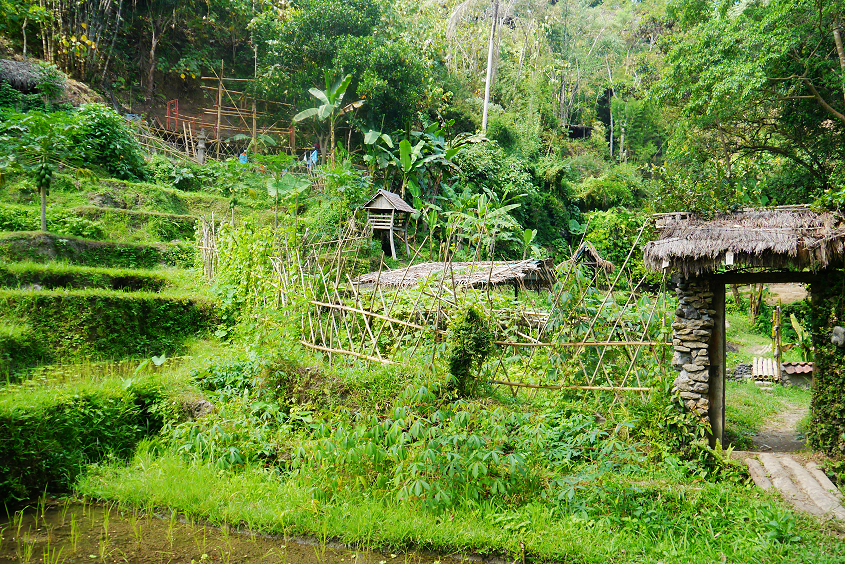 Once we’d all politely declined the cat poo coffee it was time for us to do the next part of our bike ride, which would finally take us through the rice paddies a la Eat, Pray, Love.  Prior to this we had been cycling down mostly quiet roads so when we turned off and were suddenly affronted with a path through the rice fields that was literally twice the width of my bicycle wheels we didn’t take to it that well.

In fact one of us fell off (not me for once!) and then couldn’t carry on.  It’s all very well navigating onto a small ledge when you’re still moving and have your balance but trying to start cycling in a stright line on a small ledge is near impossible.  Instead one of our guides took her back the way we’d come and they went along the roads together.  I have to admit I debated going with them because if I fell off that bike not only was I going to be in the rice paddies but there was no way I’d ve able to continue cycking forward or even go back the way we’d come. It would’ve been a very long walk for me.

No, damn it!  I had come to channel Julia Roberts and that’s what was going to happen even if it meant that I had to stare intensely at the ground ahead of me and not even dare to sneak a glance at any of the lovely scenery I was cycling through, which is the whole reason for the tour.  Oh well, at least I didn’t fall off.  Remember when this happens in Eat, Pray, Love and the only accident she has to worry about is when she collides with Javier Bardem. LIES.  Javier Bardem isn’t out there in the rice paddies either, unless he’s hiding really well, but to be honest if he’d knocked me off my bike considering the situation I’d have been pretty pissed. 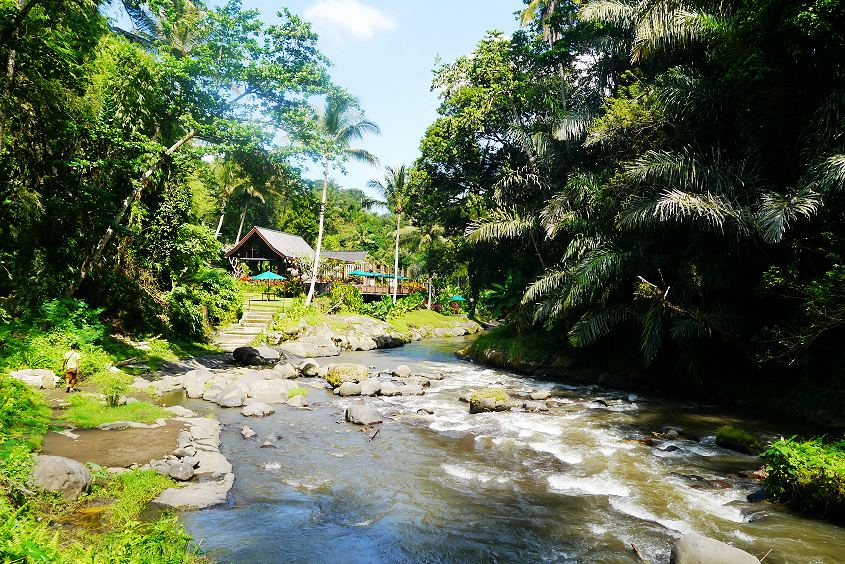 Luckily after this trauma we were back on the wide roads and riding through a local village where we stopped in at a typical Balinese home and our guide explained a lot about the culture of the people and the way they live.  At some point during this last part of the cycle there was some UPHILL cycling.  Yes, remember that original statement about it all being downhill.  Maybe they just tell you that so you’re not scared off but in truth there are a couple of moments where it’s pretty tough going, especially if you haven’t figured out how to work your many gears and have made it as hard for yourself as possible.  Yes I did have to get a push but at least it wasn’t the full way.  We were told that once our guide just put his hands on a woman’s bum and basically pushed her the whole way (it did strike me that this guy spends an unusual amount of time in close proximity to his client’s backsides but let’s not dwell on that).

Around 3/4s of the way through the tour you ditch the bikes and walk through the last bit of the rice paddies and through the jungle on foot up a pretty steep hill to the lunch spot. The adventure’s not over yet though!  As we reached the crossing for the river it became pretty clear that it was just two bamboo poles.  One to hold on to and one to walk across… and now you know why they didn’t bring the children this way.

Lunch was unsurprisingly delicious because I think that’s a requirement of food to be classified as Indonesian.  Plus I finally got to enjoy my views over the rice paddies! 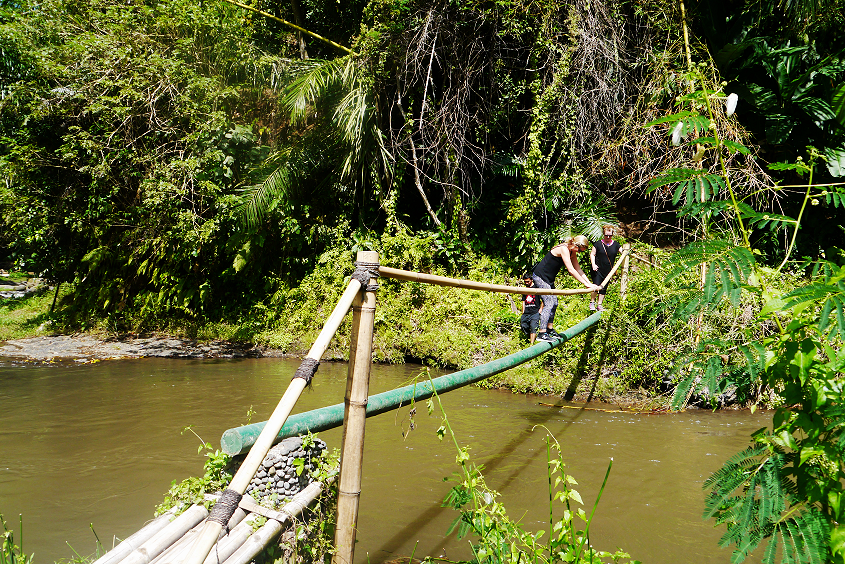 Please note the above is written with my tongue firmly in my cheek and although all of the events above did actually happen this only added to my enjoyment of the tour.  I loved it so much I even recommended it to a friend I met in Australia for her trip to Bali which I wouldn’t have done has it been as traumatic as it might sound.  This post is not sponsored but if you’re looking for a good cycling tour around Ubud you should book this one.

Also I just noticed that the bamboo bridge is mentioned so clearly I didn’t look at the website properly.  However, how that guy in the photo is managing a thumbs up during the rice paddy section of the cycle is a mystery to me. 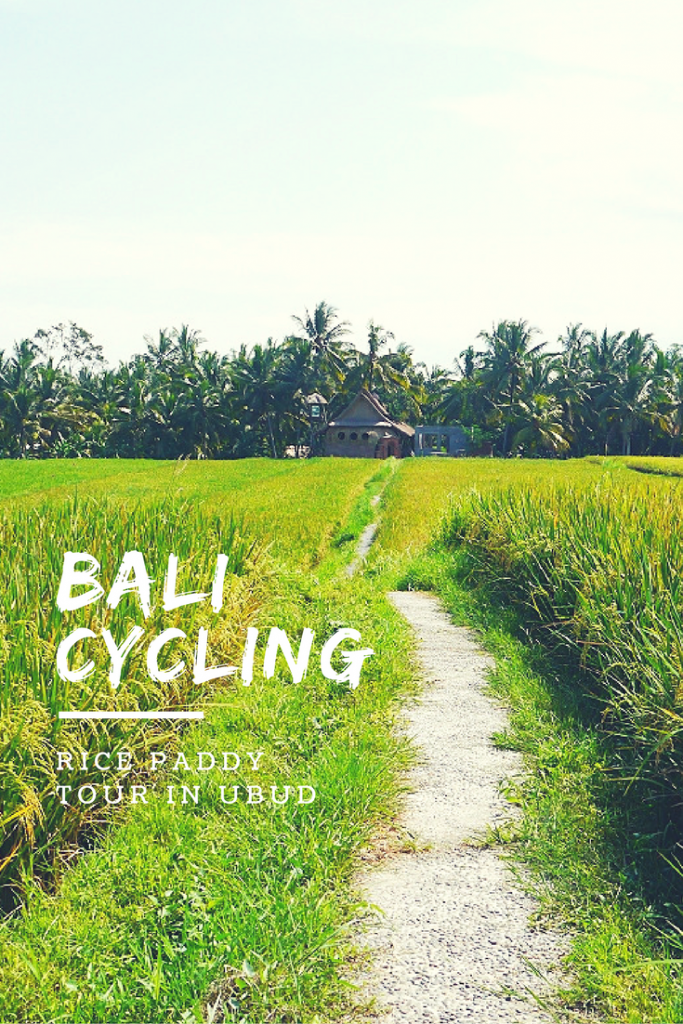 Taking a Dip With Ocean Giants: Whaleshark Swimming in Ningaloo

Luxury on a budget at Jungle Fish infinity pool in Bali

[…] you fancy venturing further out to see some of the more famous rice terraces like Teglalang you can take a cycling tour that will also take you through Ubud Village.  It’s a lot of fun but not a lot like Eat, Pray, […]