While the east coast of Australia is hugely a popular and well-travelled route, the west coast remains somewhat less visited, mostly due to the huge expanses of deserted outback between its towns (we’re talking 2+ hours between gas stations on occasion!)  However, one great thing about this is that the west has retained a lot of it’s wildness and, for those brave enough to drive it, guarantees untouched natural wonders unlike anywhere else in Australia.  You don’t need to journey all the way up to Broome for a taste of the west, there’s plenty to see on the stretch between Perth and Exmouth, known appropriately as Australia’s Coral Coast… and yes it is as pretty as it sounds!

One of the most unique things you’re likely to see in Australia, The Pinnacles draw a lot of tourists on day trips from Perth as well as those heading further up the West Coast.  Essentially they’re limestone formations in the middle of a desert landscape but the story behind how they were formed is the subject of some debate.  There are several theories but it is thought that rather than having been a large formation that eroded away the pinnacles actually started as small rock formations and actually “grew” bigger over time.  The best time to visit is early morning or evening to see the changing colours over the sand as the sun moves through the sky.  Unfortunately we were there on a particularly cloudy day and so we witnessed the sunset-that-never-was. 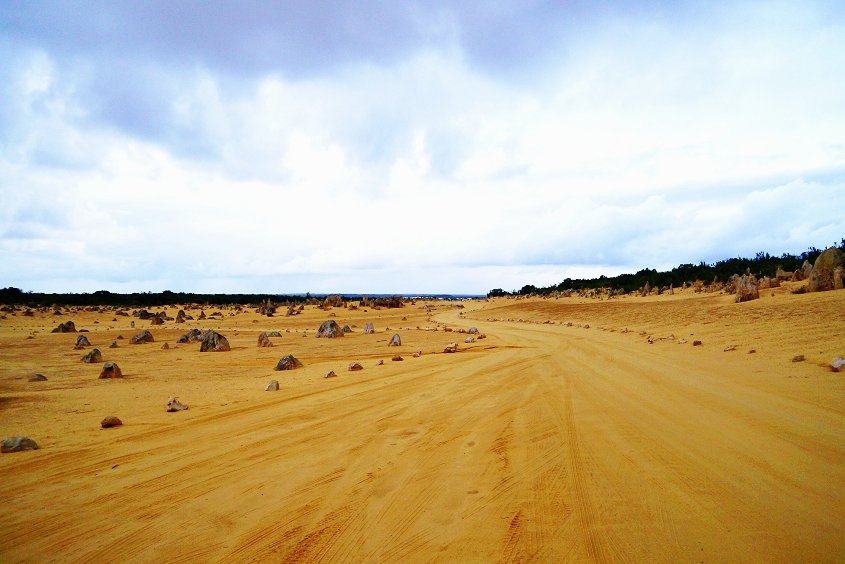 So if you want to guarantee seeing roos and koalas during your trip to Australia I would always recommend visiting a wildlife park over a zoo.  There are so many wildlife parks all over and they offer the opportunity to get close up to the animals and actually interact with a lot of them while they roam around as naturally as possible.  Greenough though is particularly worth a trip if you’re in the area because they offer opportunities to get close to animals that they wouldn’t let you near in other parks.  For example, if you’re so inclined, they’ll let you in their dingo enclosure (to be fair their dingos seem like adorable dogs- they even take them for walks on leads around the area!)  While at Greenough I got the chance to hold a little joey, which was too adorable!  Who needs children, please give me a joey any day!  Her name for the record was Mrs Patmore (any Downton fans in the house?) and they usually pair all their rescue joeys with a companion joey so they don’t get lonely.  Her companion was obviously called Daisy. 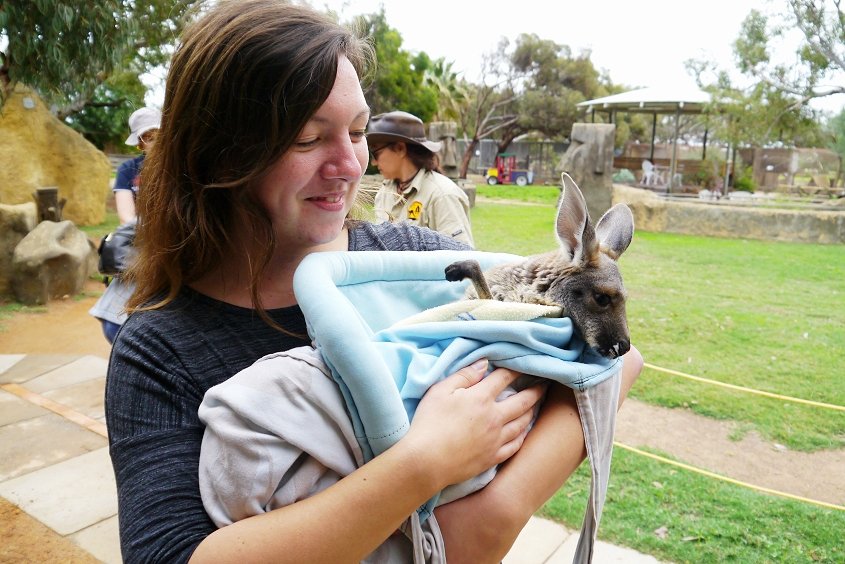 I love Australia’s national parks and Kalbarri is one of my favourites.  The Z-Bend lookout is not to be missed – pretty much the closest you’re going to get to the US’s Grand Canyon over here.  There’s also the mandatory photo opportunity to be had at Nature’s Window (although if it’s a nice day expect to queue for your turn!) 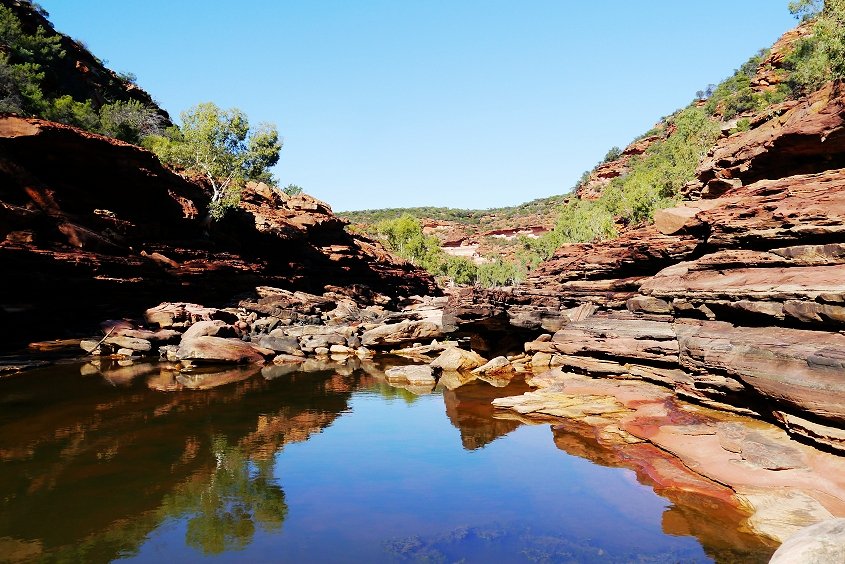 One very cool thing you can also do in Kalbarri is go abseiling down into the canyon.  I’d highly recommend it for all you adventure-seekers out there.  Just enough apprehension to get your heart pumping the first time around but once you realise it’s not at all scary the second go is really fun! 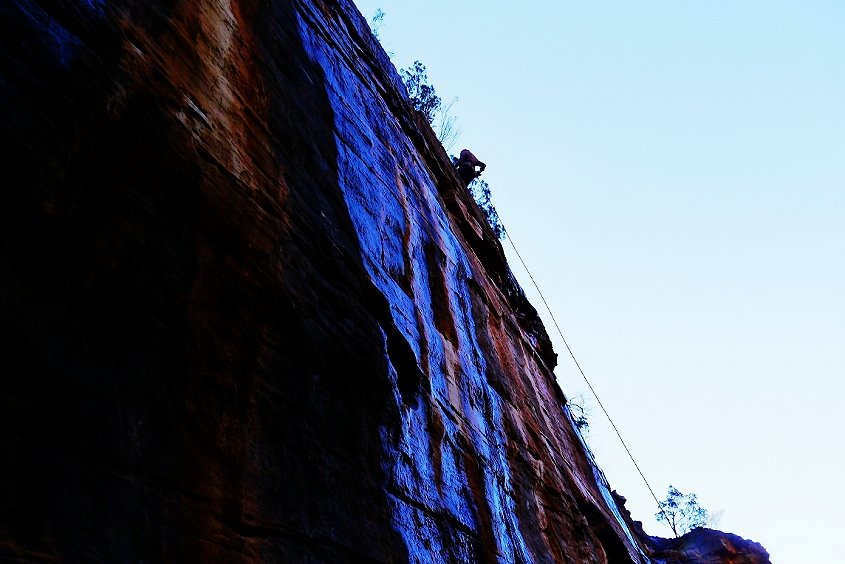 One thing I’ve noticed about Australia is that it’s pretty straight forward.  A lot of the time things are named for exactly what they are and so as you might have guessed Shell Beach is a beach entirely made of shells.  Not just any old shells either, these are all uniformly pearly white shells, which makes the overall effect pretty spectacular.  All you need to do is take a look at a photo of this beach to convince you that it’s worth a visit. 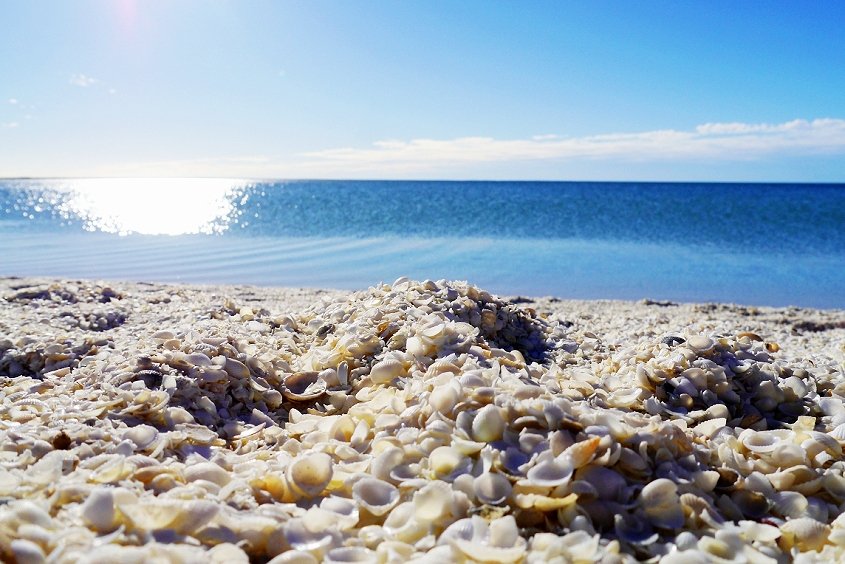 One of the more famous stops on the west coast, Monkey Mia, has nothing to do with monkeys and everything to do with dolphins.  Every morning the wild dolphins swim into the shallows for a morning fish feed, which now draws a huge amount of tourists.  Yes it is busy and because of this you will be bossed around a bit by the rangers but it’s necessary to ensure that the dolphins are protected and interfered with as little as possible.  Despite the touristy nature of the attraction you can’t do the west coast without stopping at Monkey Mia and, unless you’re about to swim with them, it’s the closest you’re going to get to dolphins in the wild.  Plus if you’re lucky enough you might even get to be the lucky person picked to hand feed them! 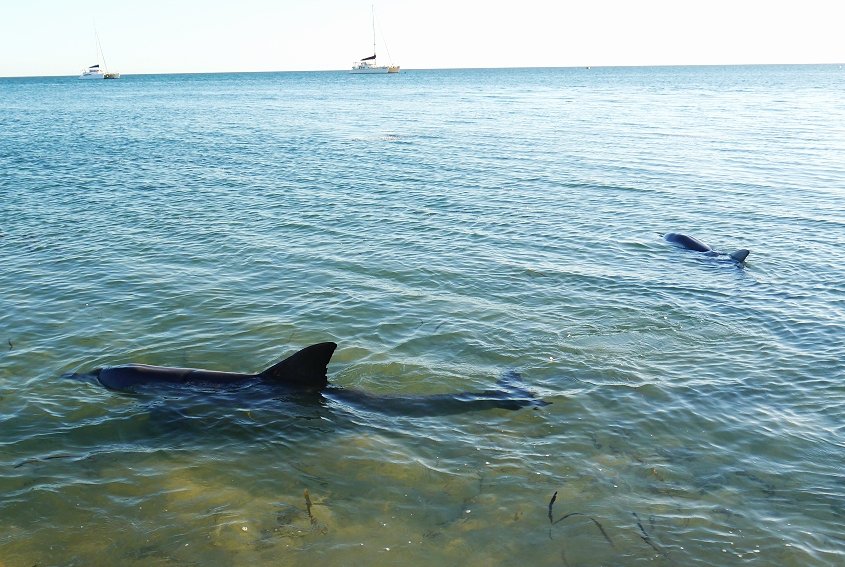 Hamelin Pool might seem like a strange place for a protected heritage site nut what at first appears like a bunch of rocks are actually stromatolites – the oldest living photosynthetic organisms on the planet – responsible for all human life on Earth!  This is one of the only places in the world where you can see these organisms still living, which makes them pretty special. 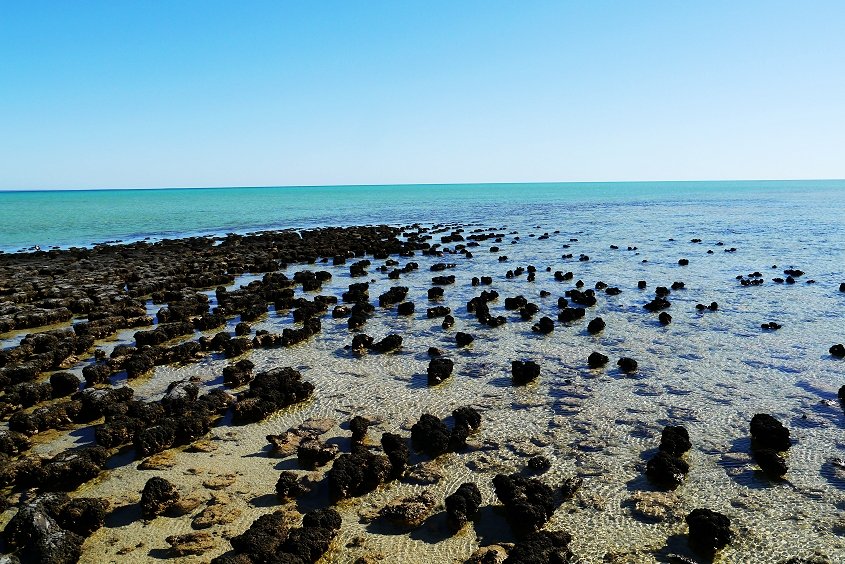 Coral Bay has a lot going for it… but it’s all under the surface.  The last real stop before Exmouth this sleepy seaside town draws a surprising amount of people. and they’re not here for the land activities.  Everything going on in Coral Bay is in the ocean.  Here you’ve got the Ningaloo Reef just off the shore so the best thing to do is grab a snorkel and swim out to explore it yourself.  Even standing in the shallows the water is so clear you’ll be surprised (and if you’re like me, excited!) to see the huge fish swimming around your ankles.  If fish don’t quite do it for you then you can also see some different ocean dwellers around Coral Bay by booking a snorkel trip out to the turtle conservation area or even a trip to swim with the manta rays that reside in the area all year round! 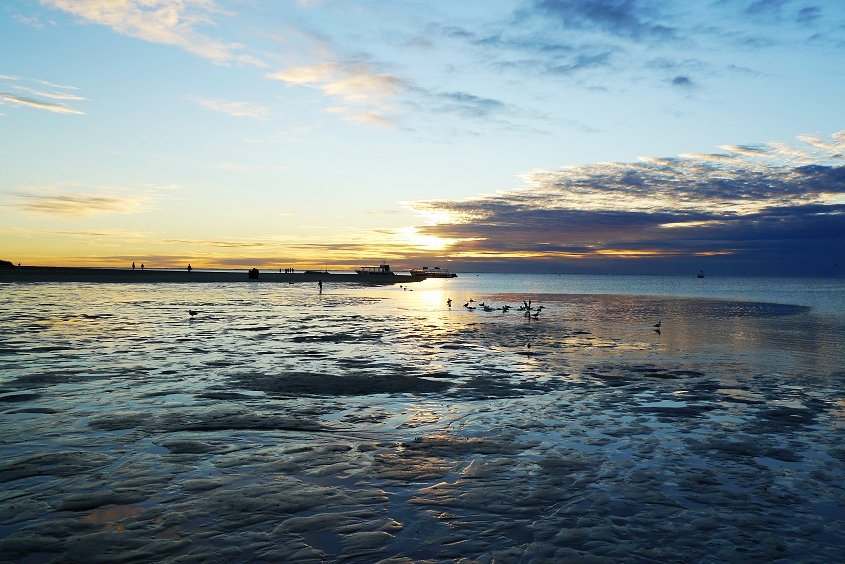 While there’s not much to do in Exmouth itself the town serves as the perfect base for exploring the Ningaloo Reef and Cape Range National Park (see below).  While there’s an array of different diving and snorkelling tours you can do, depending on how adventurous you’re feeling, the absolute must-do activity is to go for a swim with the ocean’s largest fish – the whaleshark.  Tours run between mid-March and mid-July when these majestic animals are migrating through the waters in the area.  Even more exciting they are now trialling humpback whale swims in Ningaloo as well, which may or may not last beyond this year so jump at the chance if you get it!  Whaleshark swims are the main form of tourism in Exmouth and I’m told that the town pretty much shuts down the rest of the year so definitely make sure you visit during the right season! 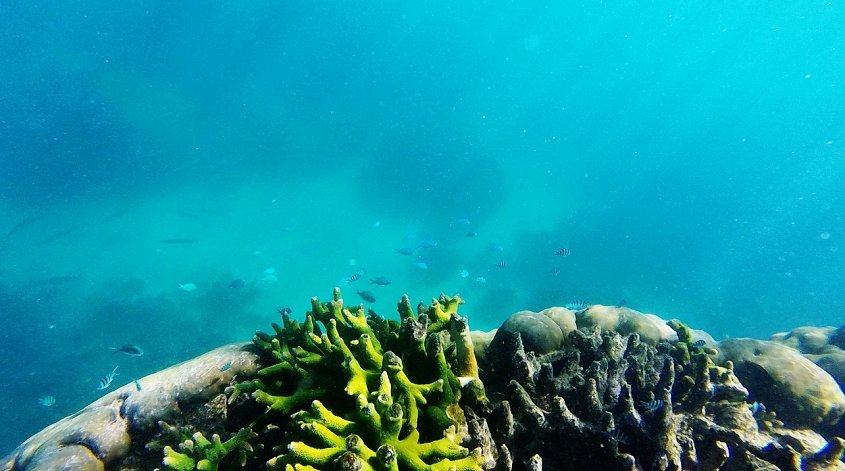 The Cape Range National Park isn’t just a gateway to Turquoise Bay (see below).  It’s well wroth a trip at least up to the lighthouse for a spectacular view over the surrounding area and the permanent campsite.  Interestingly the lighthouse was built too far inland to ever be of use and after causing several boats to crash on their approach was declared unfit for purpose and disused.  Still, it’s a nice spot for a photograph. 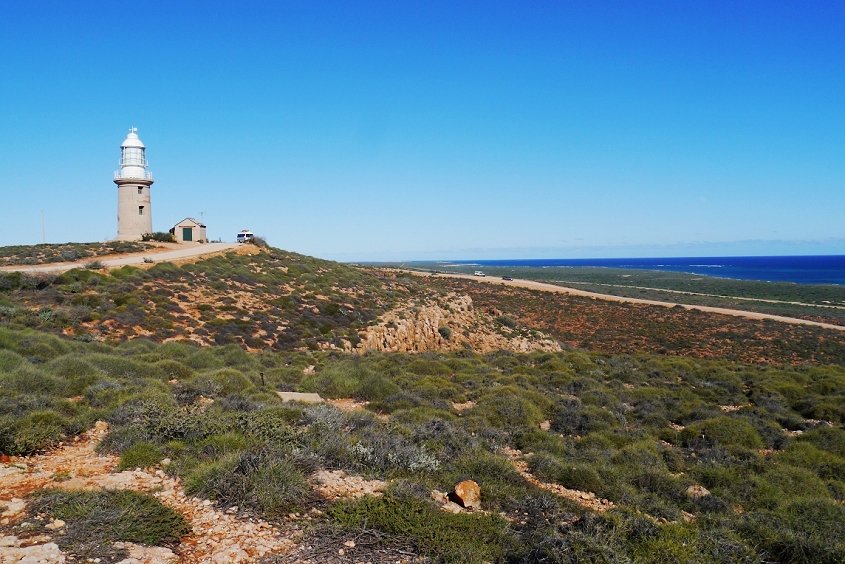 The colour of the water has to be seen to be believed at Turquoise Bay.  Again this is a perfect spot for snorkelling if you’re so inclined but otherwise just floating in that crystal clear ocean and sunbathing on the white sands will be enough to convince you that all of the driving was worth it! 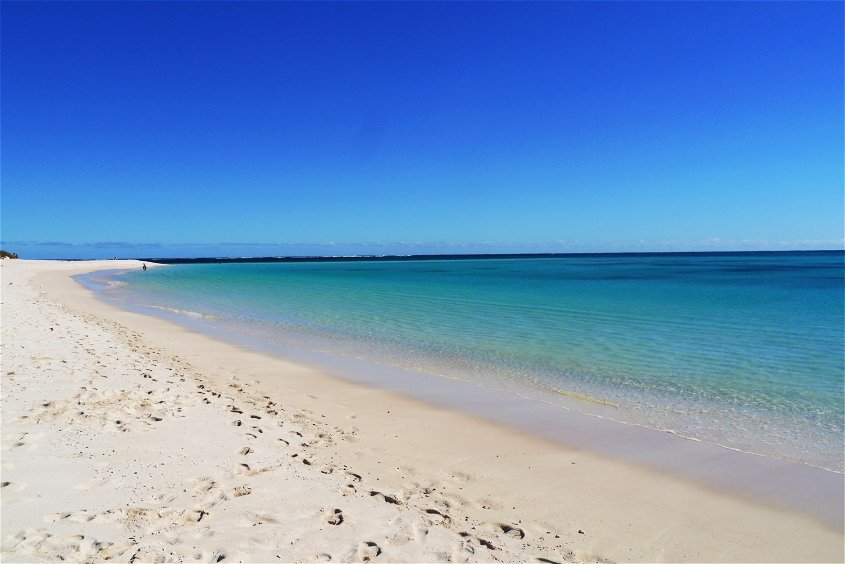 Have you visited the West Coast of Australia? Where was your favourite place? Let me know in the comments! 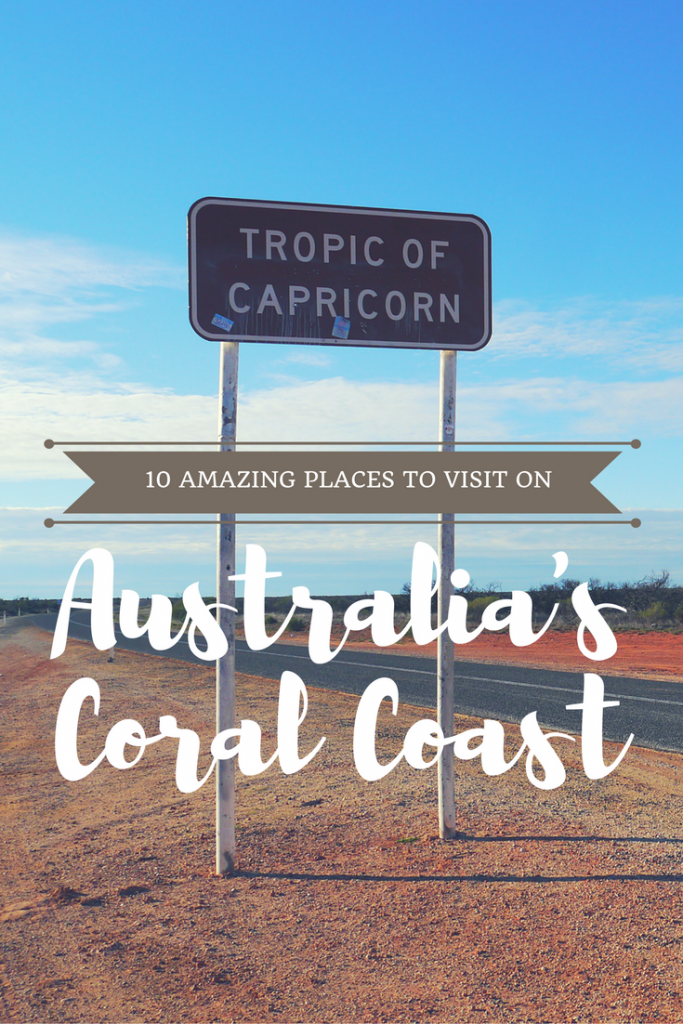 Luxury on a budget at Jungle Fish infinity pool in Bali

I went to Greenough Wildlife Park on a STA Travel tour and it was the best part of the trip by far. The owners are so passionate and the critters are just so adorable! Now I feel all homesick for WA 🙁

Yes the owners are SO lovely aren’t they? It was one of my favourite parts of the trip as well. I miss WA too!

I am moving to Australia next year – to the East Coast! However I will pin your post – lots to see on the Coral Coast!! Love the look of shell beach – that is a must visit! Adding it all to my list!

Ah so lucky! Whereabouts on the East Coast are you moving to? I’d definitely recommend heading west – the beaches are just beautiful.

This is amazing! I love the pics and all your tips. I have to save your post. I’ve never been to Australia but I totally wanna go there. Thanks for sharing! Keep it up! #FlyAwayFriday

Thanks so much! I hope you get to go some day it’s a great country to explore. Definitely put the West Coast on your itinerary, so many people never make it over there and it’s so beautiful!

How beautiful!! Such a gorgeous stretch of land! I have a couple friends who are from Perth and speak so highly of the West Coast. Hope to get to Oz one day to experience it for myself! Thank you for sharing on #FlyAwayfriday!

Thanks! The landscape on the West Coast is amazing. So many people skip it and just do the East because it’s so remote over on the other side but it’s definitely worth the trip! Just as beautiful as the East but much fewer people!

Oh my gosh can we take a moment to appreciate you holding that kangaroo?! That’s pretty much my dream right there, haha! Of course your photos are absolutely stunning, too! Thanks so much for joining and sharing on #FlyAwayFriday!

That kangaroo was a highlight – so adorable and so well behaved! Forget babies I want a kangaroo.

Thanks so much, loving #FlyAwayFriday 🙂