Whilst in Fiji I had the best snorkelling experience(s) of my life on the coral reefs of the Yasawa Islands.  Although we only stayed at one island the variety of colourful coral and fish present in the waters just off the beach on a day-to-day basis was extraordinary and, although I’m a comfortable open water swimmer, the best part is that the reef was so close to the island that you didn’t have to even swim out very far to see the exciting stuff!  In fact the only frustrating factor was that the coral was so close to the land that you could only snorkel in the morning and afternoon because when the tide got low at midday it left a lot of the coral exposed and you were unable to get in the water at all. 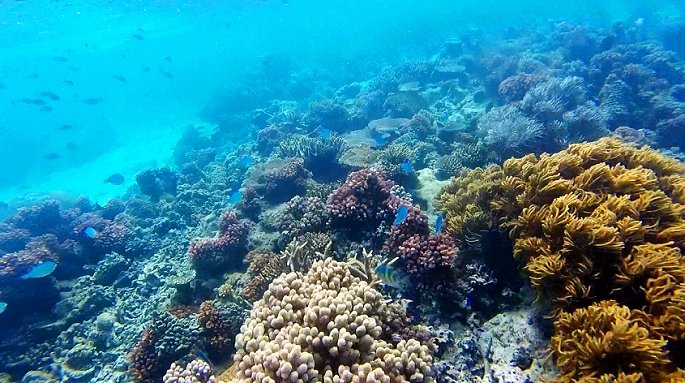 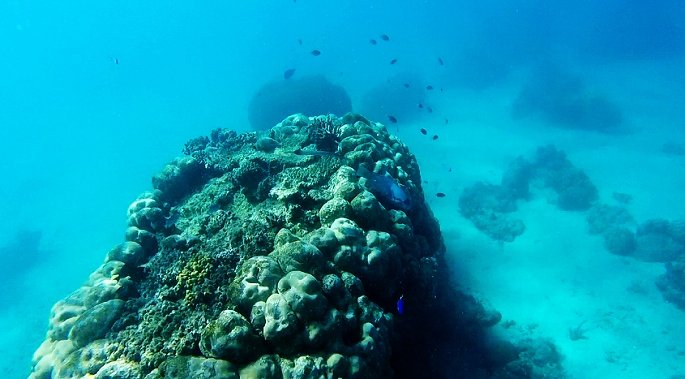 Knowing barely anything about fish I can’t even tell you what most of what I saw was but one thing’s for sure – I’ve never seen such a variety in such large numbers before.  Whilst the larger fish I only spotted alone some of the smaller ones would come out of nowhere in HUGE schools and just swim around you, sometimes splitting into two smaller groups and sometimes reforming one large group once you’d passed. 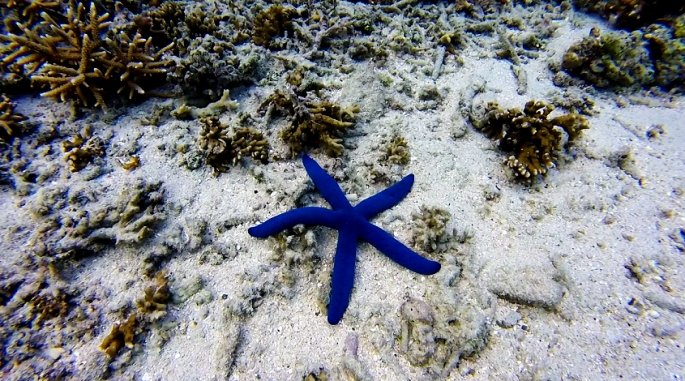 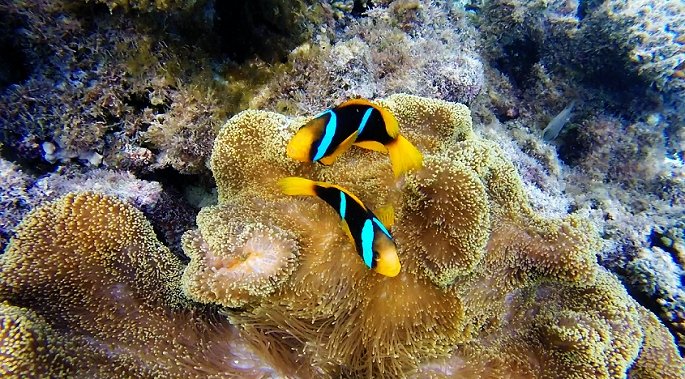 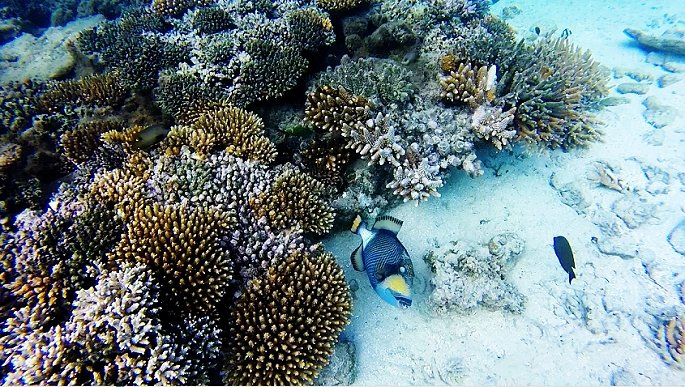 Of course it’s not just fish that you can find in these waters around the Yasawa Islands. I was very excited to see my first blue starfish (until I realised they really are everywhere!) and also spotted a very well camouflaged octopus as well as some other less exciting critters like tons of jellyfish. After being stung a couple of times by tiny ones that I hadn’t spotted I took to keeping an eager eye for the jellies and at one point swam into what seemed to be their weekly gathering – it was that scene from Finding Nemo – so from then on gave myself a neck ache by watching the surface of the water very carefully (which is where they all hang out so at least you can avoid them fairly easily). There were also some suspicious looking long thin swimmers that I was misinformed were eels so I stayed well away from, although looking them up now they turn out to be some kind of needle fish. If you’ve never seen a needle fish before you will definitely mistake it for an eel when you first encounter one. 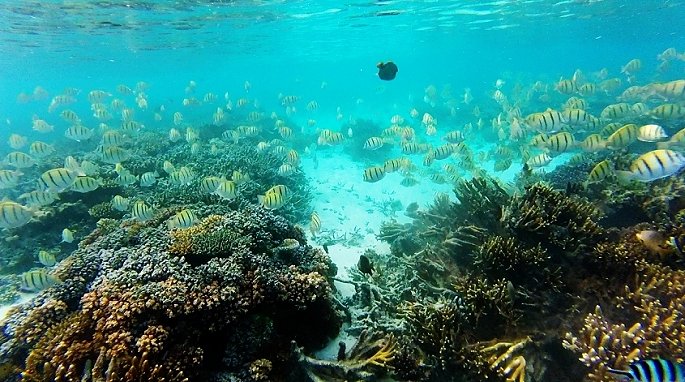 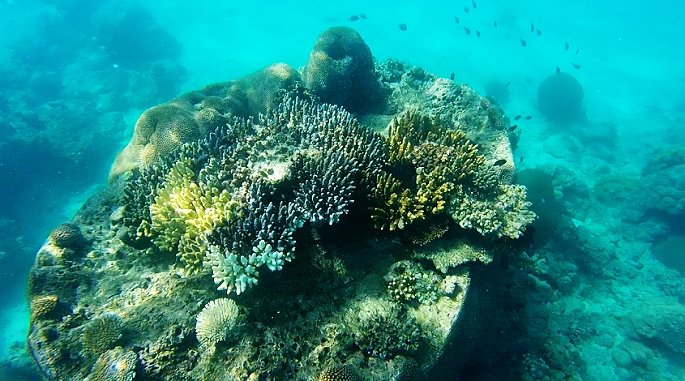 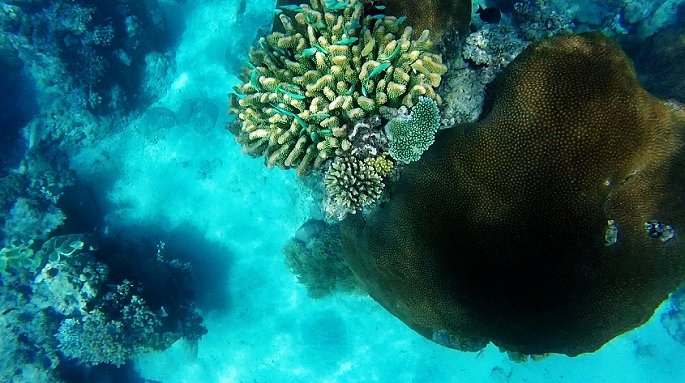 Then there’s the even more exciting inhabitants of the Pacific Ocean – sharks, turtles and (what I came for) the manta rays. Most of the resorts in the Yasawas take you out to swim with the manta rays that frequent the surrounding waters (provided they turn up) and I was lucky enough that they made several appearances during our stay and go to swim alongside these amazingly majestic and indescribably graceful creatures on my first morning spent on the aptly named Mantaray Island. It was an experience I’ll never forget… which is lucky because my gopro battery died and I ended up with this one photo to prove it happened. 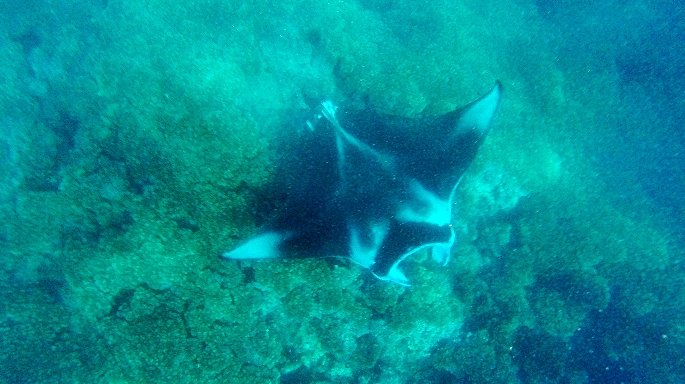 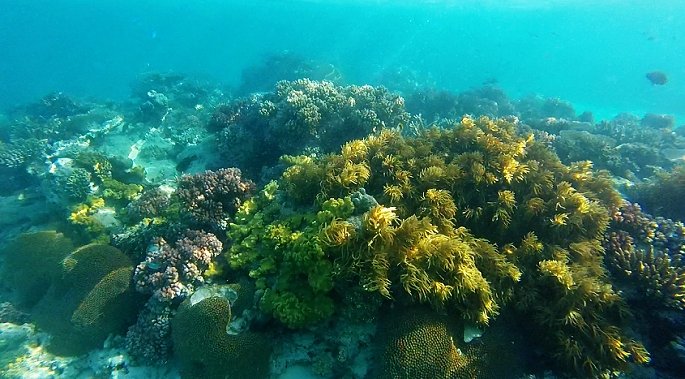 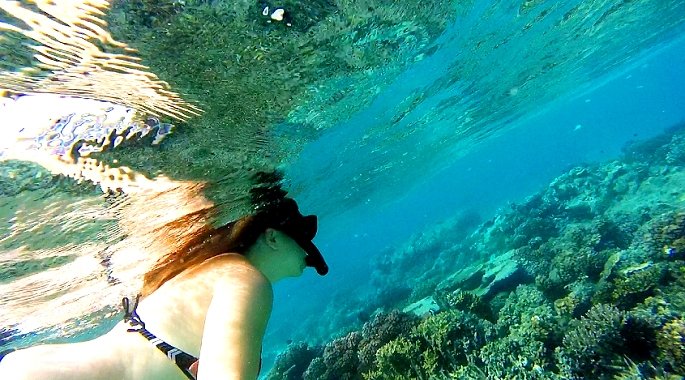 On our trip out in the boat we got to swim with four manta rays. Three were with the markings as you can see in the photo above and the fourth was white. Unlike my previous experience swimming with whalesharks, mantas are pretty fast and there’s no way you’d keep up with them. Instead it’s very much a drop, look, climb back in the boat and try and catch them again experience, which can be exhausting but is so worth it. Thanks to our amazing guide and driver and his love and enthusiasm for seeing the mantas we stayed out long beyond when we were supposed to and saw them about five different times.

So that’s another wildlife encounter ticked off my bucket list! I’m still on the hunt for a swim with an elusive sea turtle… anyone got any tips for me?

Let me know what animal you’d love to encounter in the wild in the comments! 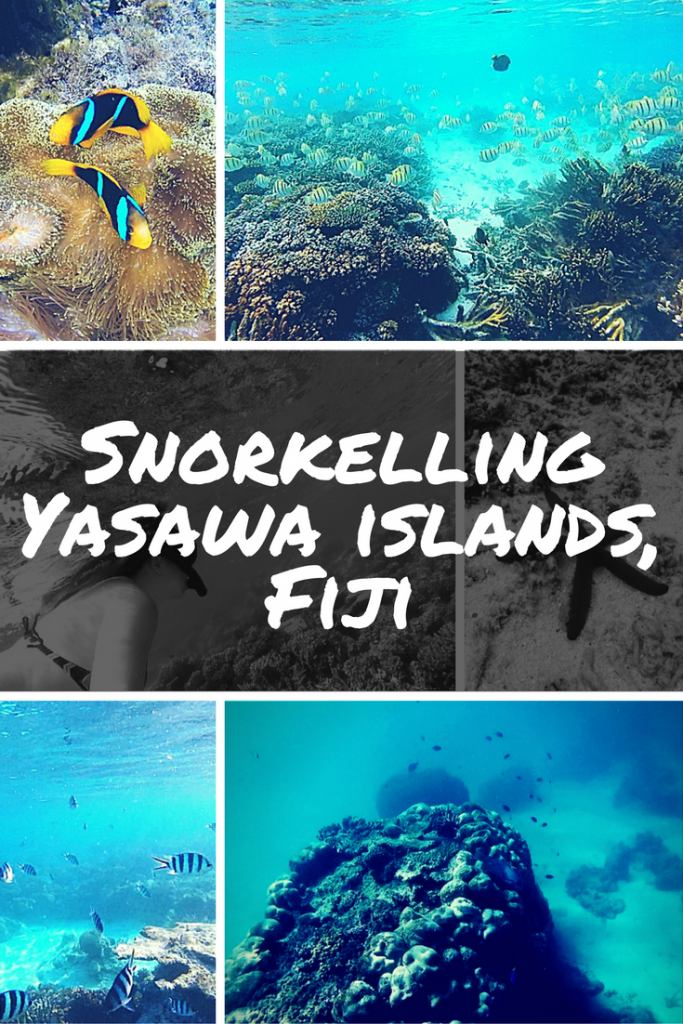 This looks amazing, the photos are gorgeous!

Wow, gorgeous photos! What a great experience! I went to Fiji but definitely did not find snorkeling as great at this. Guess I’ll just have to go back! #flyawayfriday

Ah that’s a shame! We must’ve been lucky… I kind of presumed it was all great around there. Some of it is definitely great 🙂 Did you otherwise like Fiji?

Yes we loved it too! Beautiful place and such lovely people.

Are all these photos taken with a gopro? The visibility must have been so good compared to what we have here in Sydney. My footage from scuba diving trips does not compare to the quality of the photos you have! Did you just hold it in your hand and point and shoot? I have been attaching mine on a mask and putting it on to snap photos automatically. Maybe that’s why my photos aren’t as good aswell ha!

Yes all of these were taken with my gopro. I’m still relatively new to it but I’ve found the best way to get photos is to actually take video and then grab the images from the video. They don’t end up as high quality but I’m not a fan of the way the photo option on my gopro distorts the dimensions. Also I think when snorkelling/diving especially I often don’t see the best shots at the time so I’m better off getting loads of different scenes and then spotting the good ones later on.

Honestly I don’t think it’s you, my shots from the Great Barrier Reef are not as good as the visibility was poorer. What I did though was grab a floating extendable pole for my gopro and so I hit record and just point it at things as I swim around, it means I can get closer shots of the coral and the visibility appears better because it’s closer to the camera.

The problem with this is that your video ends up so shaky because it’s impossible to hold a camera still when you’re swimming around and having it on a pole makes that even worse. I was actually thinking of getting an attachment for a mask instead and then just hitting video record before I go in and capturing everything… someone suggested it to me on a trip and it seemed like a good idea.

I’m still trying to figure all this gopro stuff out to be honest – not a huge convert yet!

I was just going to ask what camera but I saw the comment between you and Kreete. I’ll have to go grab myself a gopro for when I’m in Fiji! Loved this post since I’m planning my Fiji trip right now! Love having you on #FlyAwayFriday!

Not sure I use mine at it’s best but some people get amazing photos with gopros! I mainly use mine for underwater shots and it’s great for that because it’s so light and small to carry while you’re swimming. Enjoy Fiji – it’s so beautiful! Quite jealous, i wish I was going back haha!

Oh I love snorkeling 🙂 and those rays are cool!
x

Yes they’re amazing! The photo doesn’t convey their size because they were swimming below us but they’re also huge! 🙂

This is so gorgeous!!! I’ve never seen fish and marine life like this before!! I’ll have to go if I ever make it to Fiji!!Can’t wait to see what you share on FlyAwayFriday!!

Thanks for this post. Great for me researching snorkelling spots in Fiji 🙂 I have a top recommendation for sea turtles too: Apo Island in the Philippines – completely mind-blowing and unforgettable and full of giant sea turtles!

This is amazing! Thanks so much for that recommendation, hope to visit the Philippines in the not too distant future so I will make sure I research that.

Oh thanks so much, they’re taken on a GoPro Hero, so nothing fancy but good for underwater shots!