While it’s a truth universally acknowledged that 2016 wasn’t great for the world, personally I was lucky enough to spend more time than ever before exploring new places and ticking some of my never-ending bucket list.  Here are just a few of the amazing experiences I had this year through my travels in Australia, Indonesia, Fiji and South Africa.

Hiking to the top of Cradle Mountain

Tasmania is one of my favourite destinations from my travels around Australia and Cradle Mountain one of my absolute favourite places within the country.  The view from the top of Cradle Mountain over Dove Lake is spectacular but when you’ve hiked up there to witness it there’s an added sense of achievement and exhilaration.

Into The Wild: Launceston and Cradle Mountain

Marvelling at the world’s weirdest museum

People travel from all over the world just to come to the MONA (Museum of Modern and New Art), which considering it’s all the way in Hobart, Tasmania, will give you an indication of how unique and weirdly wonderful it is. Like most modern art, it divides people, but the experience itself is one not to be missed, from the ferry ride over on a plastic sheep to the surprise waiting in the bathrooms… everything is a talking point.

Fog & Felons: Hobart and beyond…

Spending the night in Fremantle Prison

I love to be spooked so when I heard they’d converted one of the wings of the famously-haunted Fremantle Prison in Western Australia into a hostel I knew I had to stay there… needless to say I survived and even took advantage of the fact that I was staying next door and took a night-time tour of the main part of the prison.

Spend the night in jail at Fremantle’s newest hostel

Meeting the quokkas on Rottnest Island

Regularly referred to as the world’s happiest animal, quokkas are only found in a very specific parts of Western Australia due to the lack of predators in those areas. The one place you can pretty much guarantee seeing a quokka (or, let’s face it, a lot of quokkas) is the car-free wildlife haven that is Rottnest Island near Perth.  It’s without a doubt one of the most beautiful places I’ve ever been to and the cute furry creatures certainly help make it so popular.

Discover the wonders of Rottnest Island in a day

Cycling through the rice paddies in Bali

I think everyone who’s seen Eat, Pray, Love has this dream of cycling through the idyllic rice paddies of Bali like Julia Roberts so being a big old cliche this is one of the things I had to do in Ubud.  It was a lovely day trip where we got to see more of how the locals live in the village and experience some stunning scenery outside of the centre of Ubud… even if it wasn’t exactly like Julia Roberts made it look.

My Bali cycling tour wasn’t quite what I expected

Possibly the ultimate best moment of 2016 for me was being able to swim with the world’s largest fish in the open ocean up in the Ningaloo Reef off the coast of Western Australia. It still feels like a dream… the photos are really the only way I can prove to myself it actually happened.

Taking a dip with ocean giants: Whaleshark swimming in Ningaloo

Watching the sun set over Uluru

Visiting Uluru was on my top 2 things I wanted to do in Australia.  If you don’t really get why a big rock is so high on so many people’s bucket list just believe me when I say that when you’re actually standing there looking at this 500 million year old structure looming up in the middle of the desert, it’s more overwhelming that you’d ever imagine. Watching the sun set over the rock is the ultimate moment as you watch it change colour from bright orange to deep red to almost purple in the space of a few minutes.

Camping outdoors in the outback

Although you can go to Uluru for a day trip it’s a long way from Alice Springs and the rest of the National Park is worth a visit (Kings Canyon & Kata Tjuta especially) so I opted for a 3 day camping trip. Although they provide permanent tents on the camp sites in the park we opted to sleep in swags outside.  What with it being winter it was perfect as the temperature was still not too cold and there were no snakes or other particularly nasty creatures around – they tend to prefer the warmth.  We only had the light of our fire and any phone torches to see our way around which meant that the night sky was the brightest I’d ever seen it – and we got to sleep underneath it!

One of the final things I did before leaving Australia was climb Harbour Bridge in Sydney.  It’s one of the best views in the city, and yes you can get similar views elsewhere for a fraction of the price, but the experience of the climb is all part of the fun.  Plus you get to feel like you’re in the ghostbusters remake in those jumpsuits so win-win.

Swimming with Manta Rays in Fiji

My experience swimming with manta rays in Fiji was another real highlight of the year.  In many ways it was totally different from my Australia wildlife interactions as the whole trip was so casual… our guide was happy to drop us in the water and keep following the rays for longer than the scheduled time as we were all so enthusiastic about seeing them again.  Unlike the whalesharks you can’t really swim with them because they move so quickly – it’s more like you’re dropped in the water and you watch them swim underneath you and off into the distance and then hop back on the boat to catch up with them again.

Sitting on the clouds atop Table Mountain

Having started the year in Australia, 2016 ended in Cape Town. Despite it being the height of season we managed to make it up to Table Mountain without too much of a wait and it was well worth the time spent. It was a little cloudy on the day we went up but it was constantly moving due to the much-discussed cape wind and in a way it made it even more interesting as we waited for the cloud to clear in certain areas revealing glimpses of the scenery we hadn’t seen before. With the cloud you also get a sense of how high up you are, as you end up actually above the clouds!

Getting up close to African wildlife

2016 ended on a high as we got to go to Aquila Private Game Reserve for a couple of days and were taken out on safari to see the animals that live there.  Among those we saw included giraffes, zebras, springbok, wildebeest, hippo, white rhinos and elephants.  We were also lucky enough to get incredibly close to a pride of lions and witness two of the males having a scuffle (I can tell you that hearing a lion roar was both terrifying and exciting).

So that’s it for 2016… looking back on it all for this post really demonstrates how many amazing wildlife encounters and what epic scenery I’ve witnessed this year.  Hopefully 2017 will continue along the same lines…

Share your favourite travel moments of 2016 and big trip plans for 2017 with me in the comments. 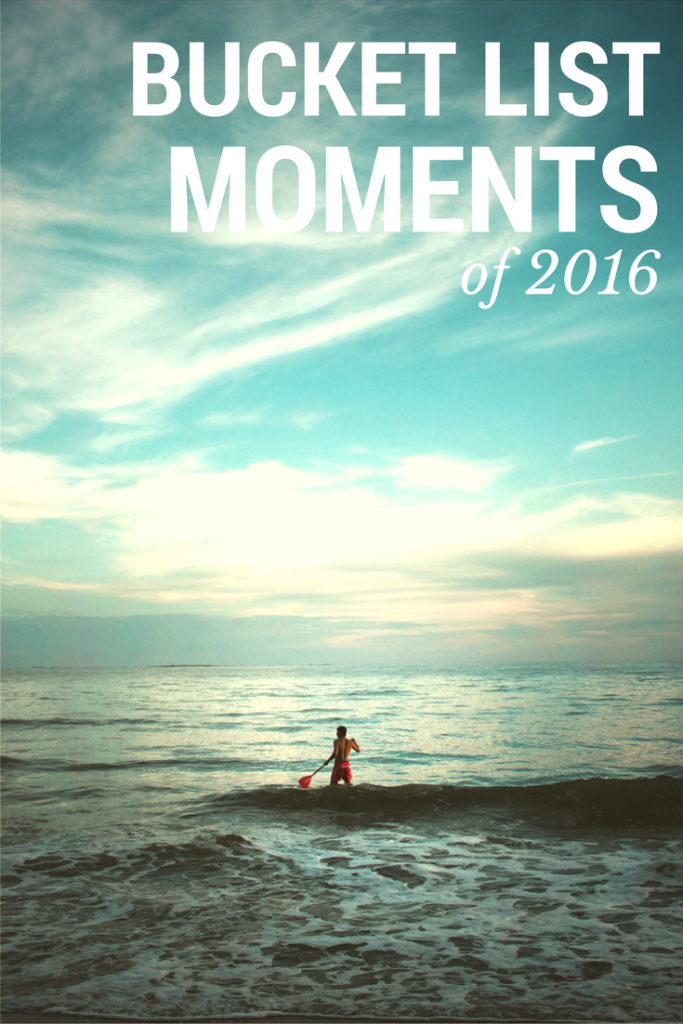 5 things I wish I knew before I started blogging

Why Alice Springs should be on your Australia itinerary

Thanks Jessie! So true, it was great.

Awesome list of moments! Your picture of Uluru looks spectacular! Hope your 2017 is as amazing as last year!

Thanks so much!
Uluru is just amazing, one of my favourite places visited last year. Happy travels!

You’ve had some really great travel moments over the past year! I want to add almost all of them to my own travel list. Even with the rice paddies not being as romantic as you hoped. 🙂 #flyawayfriday

So true… I really can’t complain – even about the rice paddies – they were still pretty spectacular!

Incredible moments in this list! Swimming with Manta Rays and Whale Sharks sound like incredible experiences. I’m also excited to read about the Sydney Bridge Climb, it’s been something I’ve had on my list for Australia for a long time.

Oh I definitely recommend Bridge Climb! It’s great fun, the guides are excellent and you learn loads… not to mention the amazing view!

What an awesome year! Seeing wild life in Africa is amazing!
#flyawayfriday

Can I just steal your 2016 bucket list and make it my 2017 bucket list? Looks absolutely amazing and basically everything here is on my list too ! #flyawayfriday

Haha you absolutely should – I thoroughly recommend it all!

Yay! So glad to have you back on FAF! 🙂 Cycling through rice paddies would be SO much fun! Love it! Thanks for joining Fly Away Friday, hope to see you again this weekend! xo

damn girl!! these are amazing!!! Especially the African safari and the whale sharks!! I’d love to experience that!!

Thank you!! I know, I was super lucky to have so many amazing experiences in one year! The whale sharks and safari are definitely two of the top ones out of a great bunch…