On safari in South Africa at Aquila Game Reserve

Just before the end of the year during our Christmas family trip to Cape Town we took 2 days out to travel to Aquila Game Reserve and fulfill that lifelong dream so many of us have… to go on safari. While the number one place to safari in South Africa is of course Kruger National Park, our limited time meant we couldn’t reasonably travel that far, so we opted to spend 2 days/1 night at a smaller game reserve around 2 hours from the city. Of course this made the experience a little different as all of the animals are in a much more closely confined area (although it is still HUGE and not at all like seeing them in a zoo) which makes the job of finding them for the tour guides a lot easier. However we still didn’t see everything they claim to have there, which does show the scale of the area where the wildlife lives, and what we did see we were lucky enough to get really close to… especially the big cats (more on that later).

You can visit Aquila for a day but seeing as getting there involved a longish drive we opted to stay overnight.  If you choose this option it’s a little bit more relaxed time-wise. You get taken out for 2 game drives – one on the afternoon that you arrive and one early the following morning. This is great, not just because you have twice the chance of seeing the animals, but also you get to see them at different levels of activity.

As an example on our first game drive we saw the two teenage elephants dousing themselves with the dusty earth (I’m not sure the purpose of this, could someone fill me in?) and the following day we caught them having a drink down by one of the watering holes. 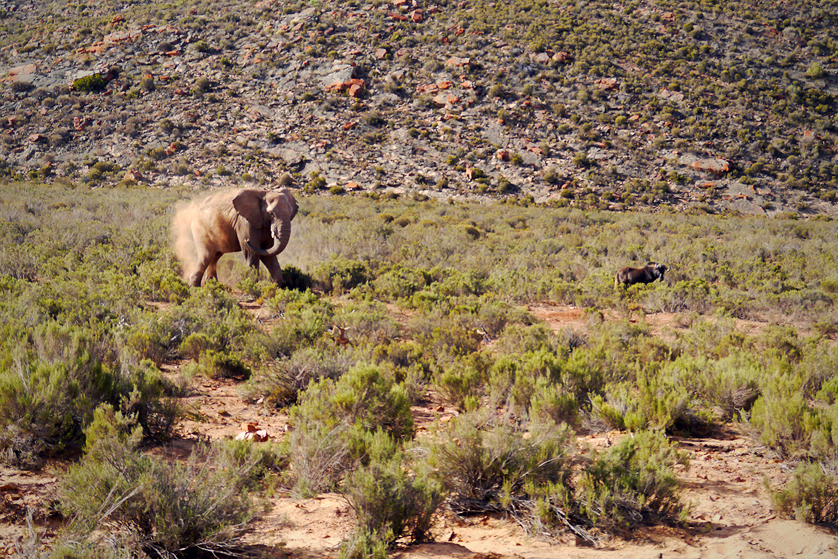 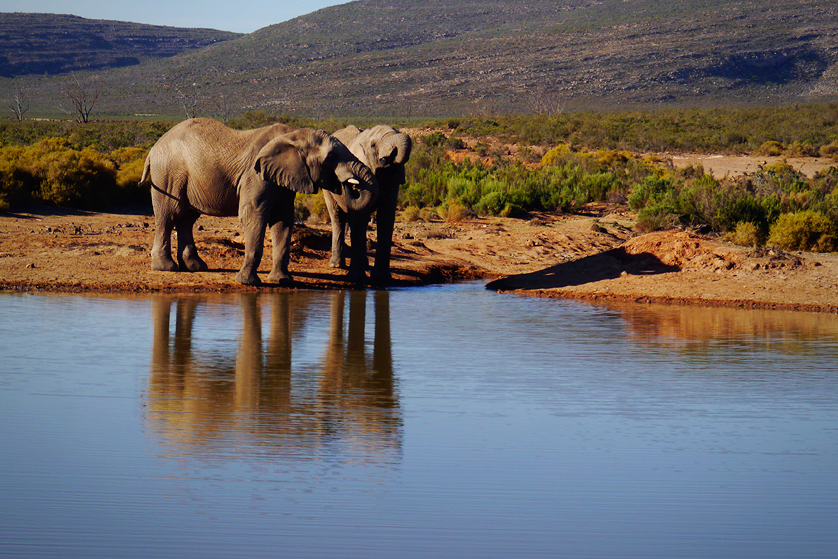 We were lucky enough to see the hippos on land on our first game drive (which we were told was a rare sight!) and then in the morning of the second day they were back in their usual spot in the water and at a much further distance away. 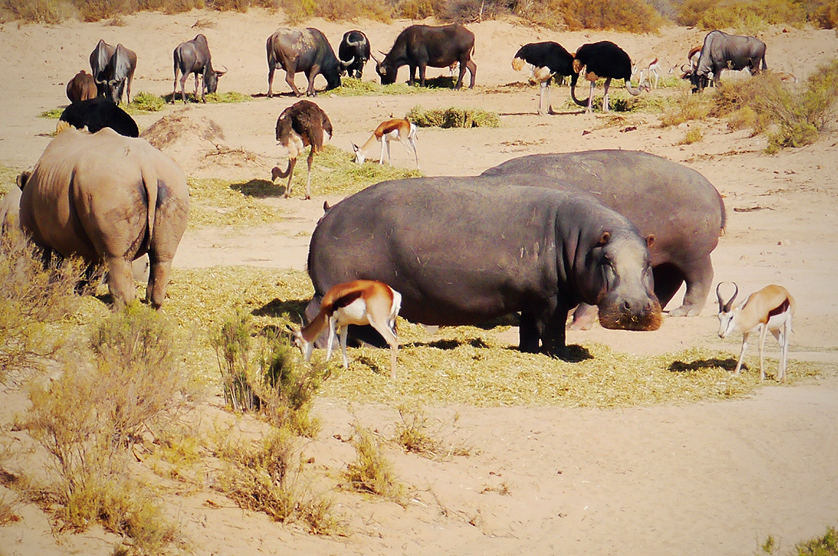 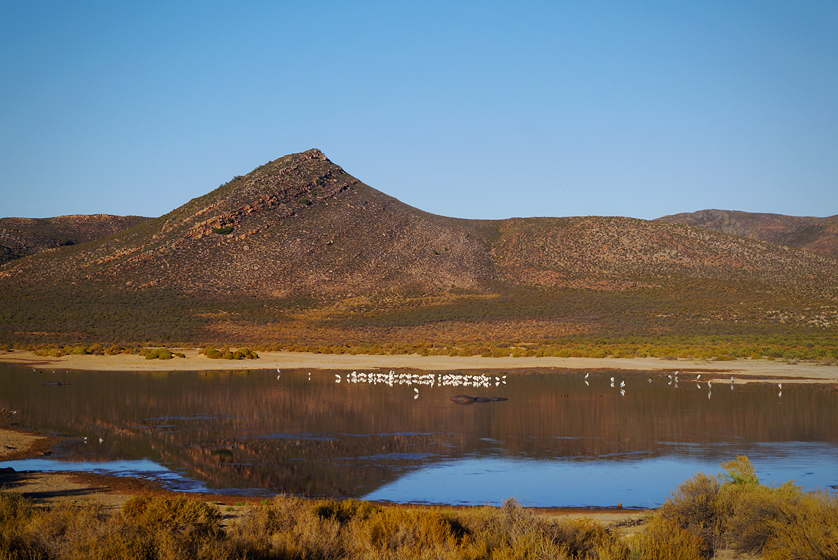 The lions were also much less active on the afternoon drive whereas in the morning we witnessed some intimidating behaviour as two of the males faced off over the older’s pride of females.  This happened alarmingly close to the jeep and while we were all mesmerised, it was also a little scary. I have to admit I never thought I’d get to see such dangerous animals so close up at all let alone hear them roar. 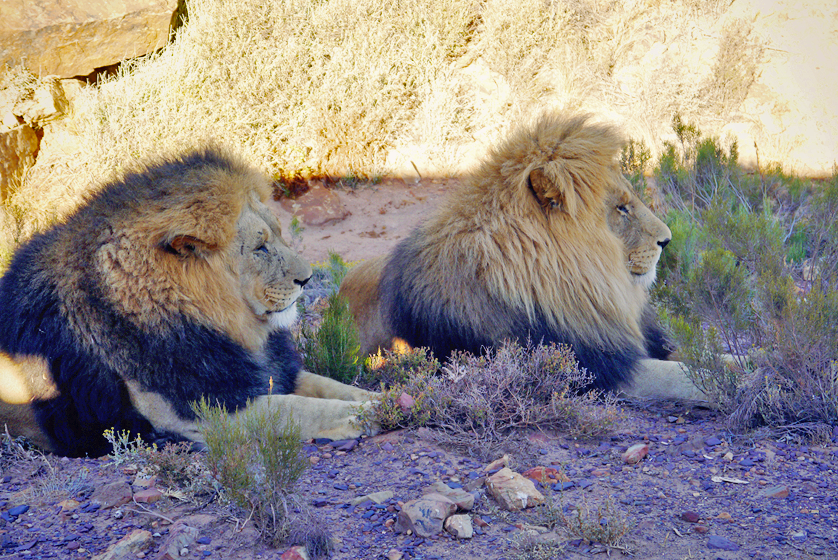 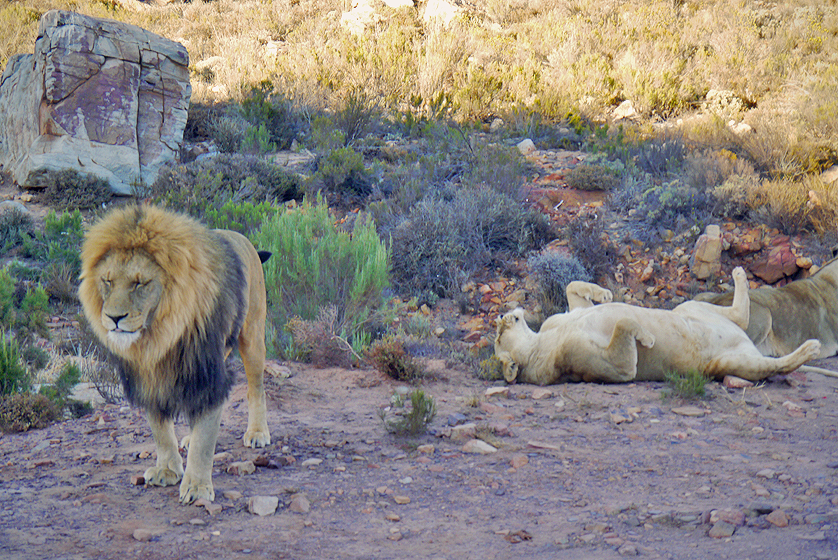 At Aquila they also have my new personal favourite animal of the bunch – the white rhino. More specifically they have an adorable baby rhino who’s been at the reserve about a year after he was found abandoned by his mother. At that time they put into place an 18-month plan to rehabilitate him so he can be released back into the wild… but South Africa are at the height of a poaching crisis which has slashed white rhino numbers and put them on the critically endangered list.  Sadly they are always at risk, with some other reserves actually having had their rhinos killed for their horns from within a protected area… it’s hard not to feel heartbroken watching that little rhino while knowing what dangers are potentially out there for him. 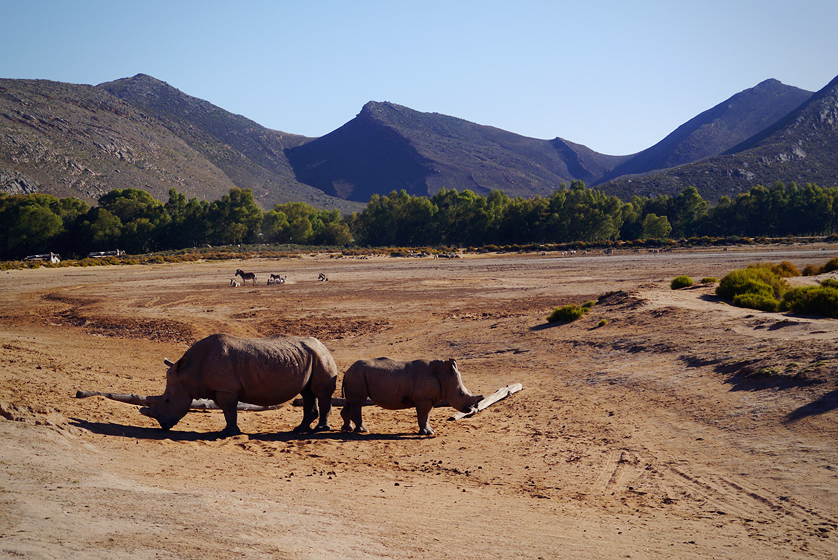 The great thing about doing the overnight stay at Aquila is you get plenty of free time to relax and enjoy the surroundings of the lodge.  As well as the beautiful surrounding reserve, there’s an infinity pool, the animal rescue centre to visit and they even have baby ostriches nearby! 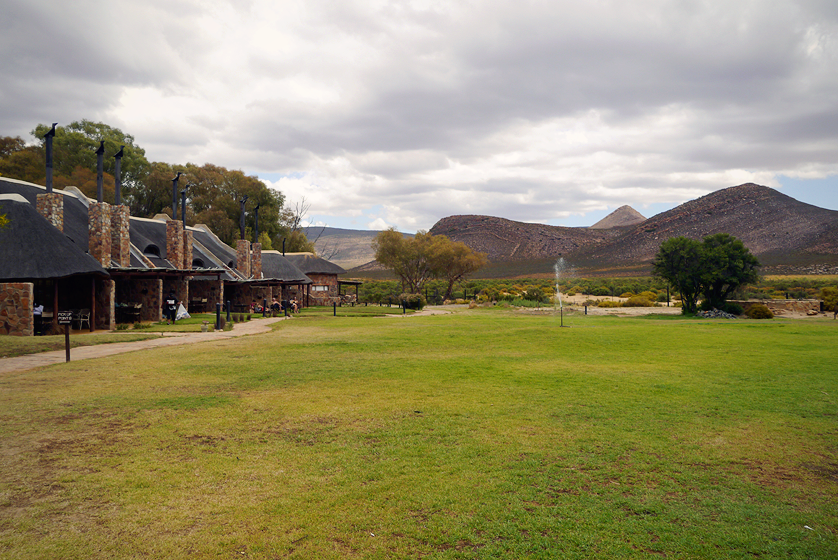 We stayed in a family chalet which had a ton of little highlights that excited me more than they should have – notably a mezzanine, outdoor shower and corner bath (despite only being there one night I still insisted on using both!)  Every chalet also has it’s own little front porch area, where one of the resident peacocks decided it would hang out every single time we weren’t there.  We’re pretty convinced it was making plans to move in. 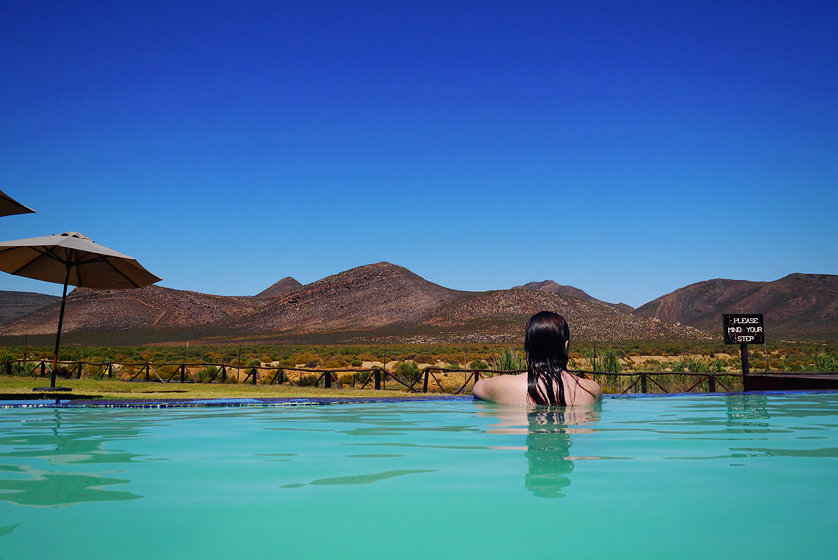 Before we checked out on the final day we made good use of the pool even though we were really the only ones in there for much of the time. Okay so it wasn’t the warmest pool in the world but we’d come from winter in the UK after all… plus I had to get that shot to make everyone back home jealous!

If you haven’t already guessed we loved Aquila and highly recommend it if you’re looking for a place to safari in South Africa. Have you ever been on safari?  What was your favourite animal spotting?  Let me know in the comments so I can plan where to go next… 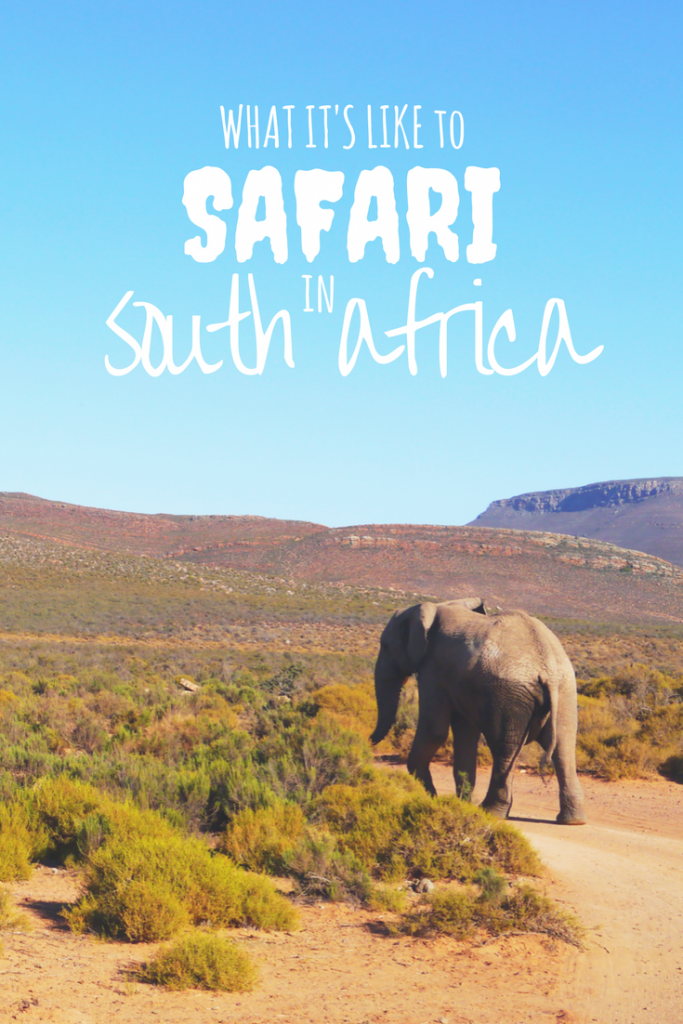 Wow Kat, your safari pictures are AMAZING! Your pool shot was a total success; I’m jealous! Can’t wait until I go on safari in the Spring. 🙂

Thanks so much Stephanie! Whereabouts are you going on safari? You’ll have an amazing time I’m sure!

Lovely – I grew up in Southern Africa it’s always so nice to see photographs and read about others experiences! Though I have been on many game drives I confess that I am always terrified whey we get so close to the big cats – lions particularly scare me to death! But it’s also such a thrill to be close to them.

Rhino poaching is horrific and a terrible thing that is happening to the animals in Africa- too many photographs of dead rhino with their horns hacked off. Makes me sad and really angry.

Oh wow what an amazing experience to have grown up there! They are terrifying aren’t they… I think I was equally thrilled and terrified. So sad about the rhinos – I can’t even bear thinking about it!

I would love, love to do something like this! It is incredible the amount of animals you saw. I like the photo where there are like 4 species hanging around the water hole. Well, and that pool at the lodge … what a way to finish the day! #FlyAwayFriday

Thanks so much for your kind comment Ruth. It’s such an awesome experience I do hope you get to do it someday… the pool was the cherry on top 🙂

That looks SO incredible Kat! Wow, how fun would it be to hang out with all those majestic animals?! DEFINITELY a bucket-list item for me! Thanks for sharing the amazing experience and photos! Thanks for joining Fly Away Friday, hope to see you again this week!

Thanks for your comment Kana. It’s such a fun experience I highly recommend it!

wow this is amazing!! such a bucket list trip! love all your shots of the animals~ can’t wait to see what you share this weekend on FlyAwayFriday!!