Guys I’m back!  I know, I know.  Where have I been you ask?  Well the answer is nowhere, but I had a bit of a blog rut (happens to the best of us) and even though I had loads of content from 2 trips I took in July to share with you I just couldn’t bring myself to write anything for a while, and then I got out of the habit, and then… well 3 months passed.

The good news is that now I’m ready to tell you all about Finland properly and why it’s one of my favourite places – I mean it’s a Nordic country so this isn’t going to come as a great shock to anyone – but I really did love my trip there and got to see a fair amount of the south in the two weeks I was there.

We are starting, maybe obviously, with Helsinki.  Finland in general is known as being somewhere that is quite expensive to visit and I’m not here to dispel any myths sadly,  However it is possible to see a lot of the sights and even save some money on dining out if you know where to go.  What follows are a few tips I picked up…

The first activity I’d recommend to anyone when visiting a new city is to take a walking tour, and better still, a free one! This is undoubtedly the best way to see a lot in a short space of time but it will also help you to orientate yourself and prioritise what you want to see outside of the tour. Got a glimpse of something that looks interesting? Then you can just go back later. 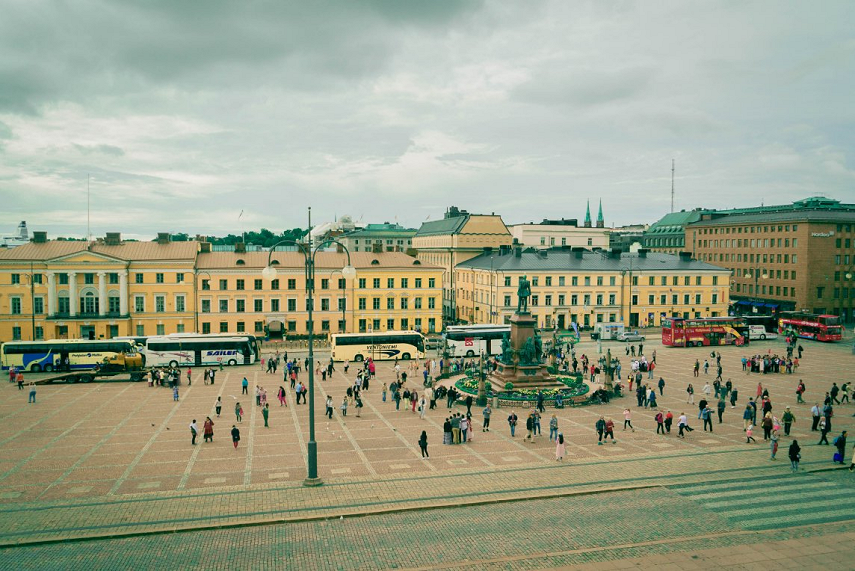 We took the Historic Walking Tour run by FreeTours.com which lasts for a few hours and visits lots of points of interest around the main area of the city including Helsinki Cathedral and the Russian Church (as you will see below) and finishes up by the harbour. The tour guides also gave us several tips for other things that we ended up doing during our trip… such as visiting the Allas Sea Pool Finnish Sauna and where to get a scrumptious and inexpensive salmon soup (all will be revealed later!) 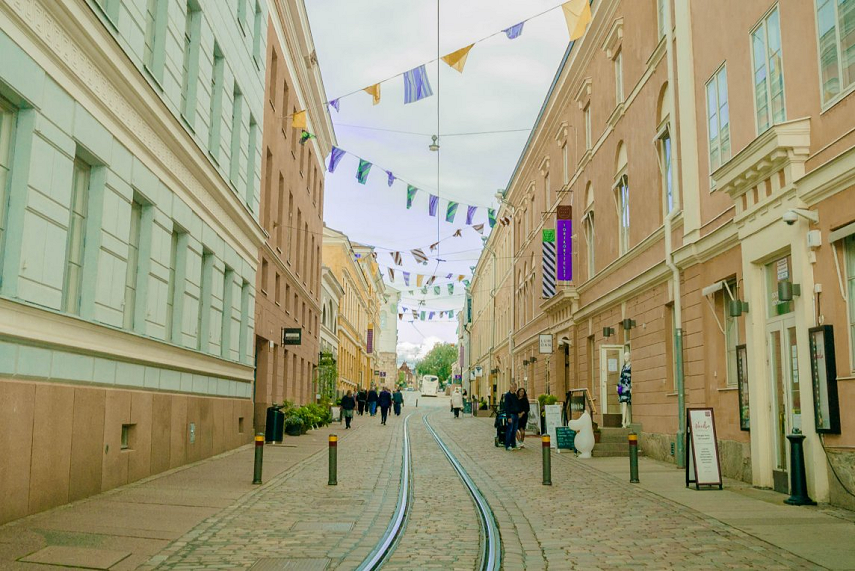 With this particular tour you do need to book in advance even though there is no payment required and you can do that online. As with other free walking tours you tip the guides at the end of the tour depending on what you think it was worth so, even if you tip generously, it is likely to end up cheaper than a ticketed tour.

Helsinki is full of some of the most interesting architecture, with a mix of Swedish and Russian influences to be found everywhere, some even combined in the same building such as in the Helsinki Cathedral.  The Cathedral stands at the centre of the main square and is basically impossible to miss, even from the harbour it can be seen above the majority of the other buildings in the city due to its high positioning. 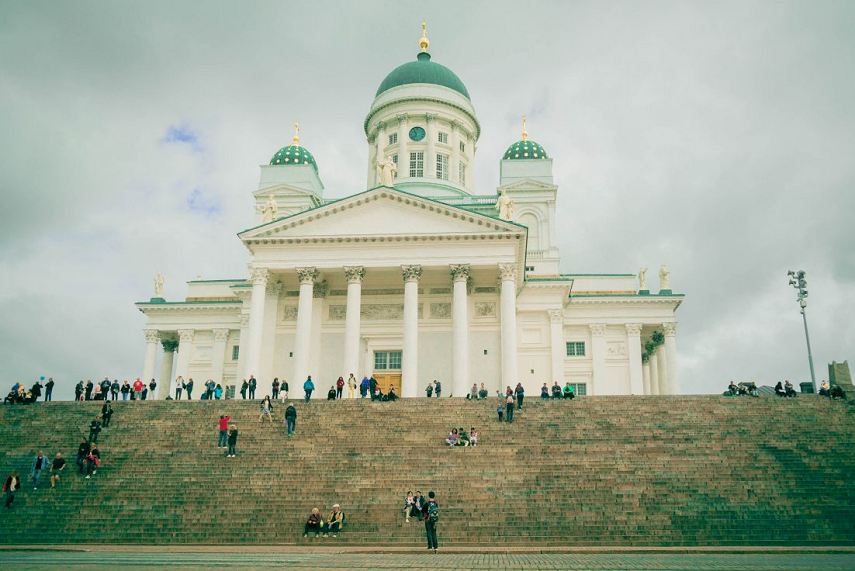 It is well worth the few steps climb to take a closer look and also to peek inside – there is no cost for entry – as although it is quite simply and cleanly decorated it is still quite stunning and interesting to contrast with the much more elaborate interior of the Russian cathedral. 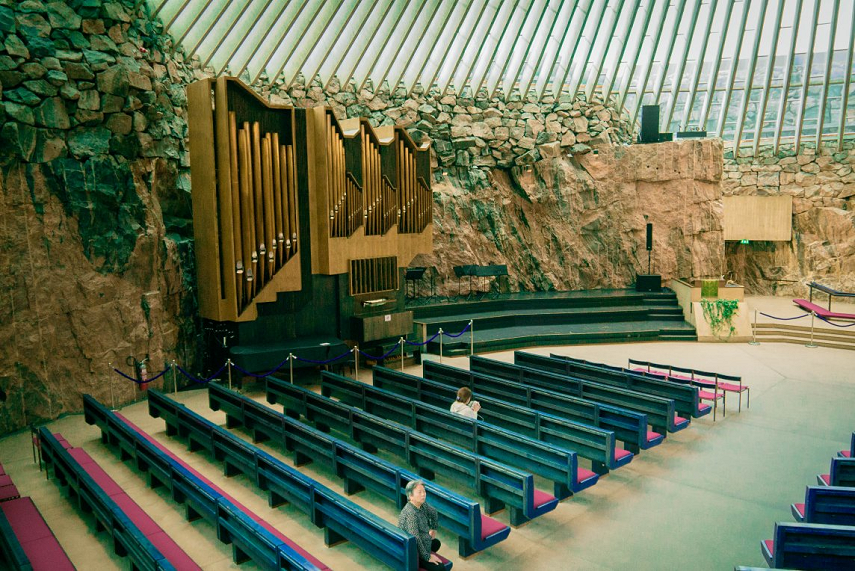 A little further out from the main hub of the city the Temppeliaukio Church, affectionately nicknamed the Rock Church, is worth the trouble you might have finding it… my tip is to head towards the Natural History Museum as *ahem* certain maps of Helsinki you might find in the tourist information office are not hugely accurate. Built in 1969 the church has actually been built into the rock, giving it famously great acoustics that have transformed it into a popular concert venue.  It is also a pretty popular tourist attraction and will set you back 3 euros entrance fee… but you won’t find anywhere else like it! 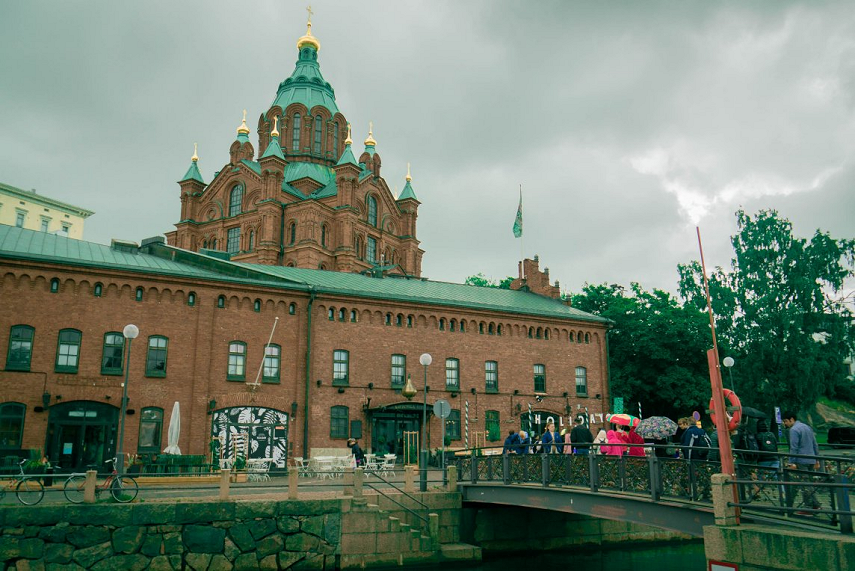 Uspenski Cathedral is a Russian Orthodox church that lies close to the harbour and is modelled on a 16th Century church from Moscow, as you can probably tell from just looking at the exterior domes and colours. Again this one is free to have a look around inside and it is quite something to behold. The ceilings and decorations on the walls are so intricate and elaborate and there is an array of colour as well as lots of gold.  Another one definitely worth braving the inevitable crowds for.

Take a walk around Toolonlahti Bay

Possibly my favourite area of the city, Toolonlahti Bay is a large body of water within walking distance of the main streets of Helsinki but that will make you feel like you’re out in the Finnish countryside.  This is a spot popular with locals but much quieter still than other areas of the city. You can hire a rowboat or simply take a stroll all the way around the lake (it doesn’t take as long as you would think!) 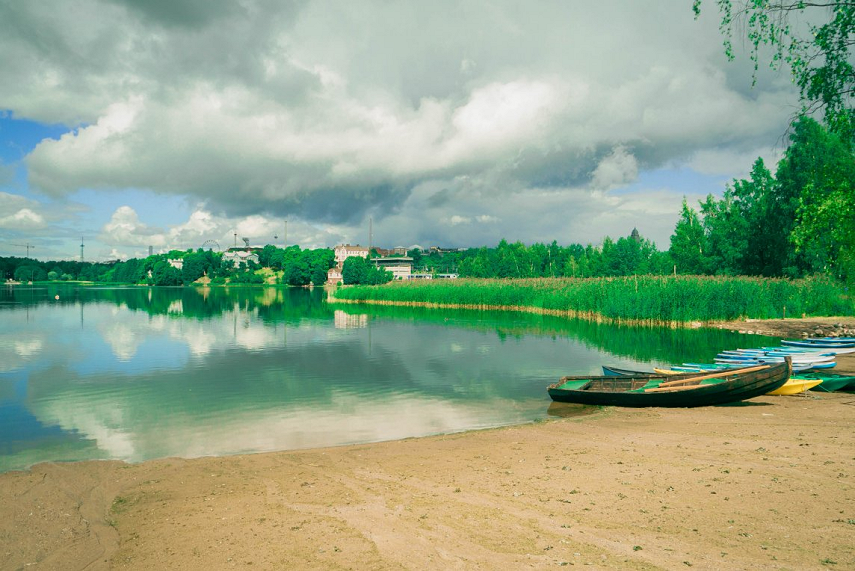 On the opposite side there is a short walk from the main road to a kids theme park if you’re so inclined. We did have a little wander around to check out what was going on but as we went on a particularly nice day and it was the summer holidays there were a lot of people.  There is however a FREE ride there that takes you up in a spinning observation deck so you can get a great view of surrounding Helsinki.  If you’re not so into the idea of trekking all the way out to a kids playground for a cheap view though read on as I have another tip for you later. 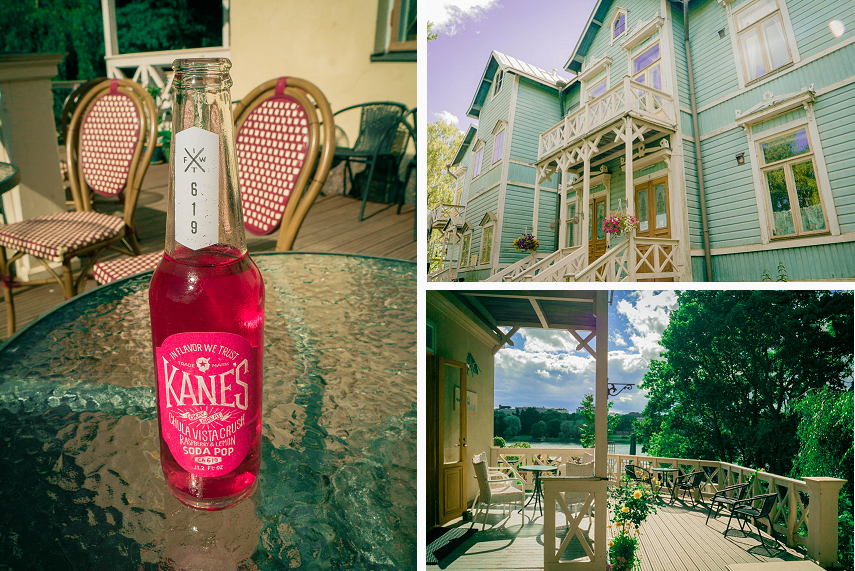 Instead I’d recommend doing a complete circular walk of the lake stopping off at one of my favourite “we just stumbled across this place” gems of any recent trip – Sininen Huvila cafe.  This place has got to have one of the best views ever looking across the bay, and on a sunny day like the one we had you’d be hard pressed to believe you’re not at the Italian lakes. Okay so unnecessary food and drink should probably be avoided when visiting Helsinki on a budget BUT I think it this case it’s fair to make an exception.

Grab some grub at one of the markets

Eating and drinking is arguably the most expensive thing you can do in Finland and definitely the necessity that we found to be the most expensive… the thing is that the food is also sooooo good so you won’t want to miss out by eating too cheaply or cooking for yourself too often. 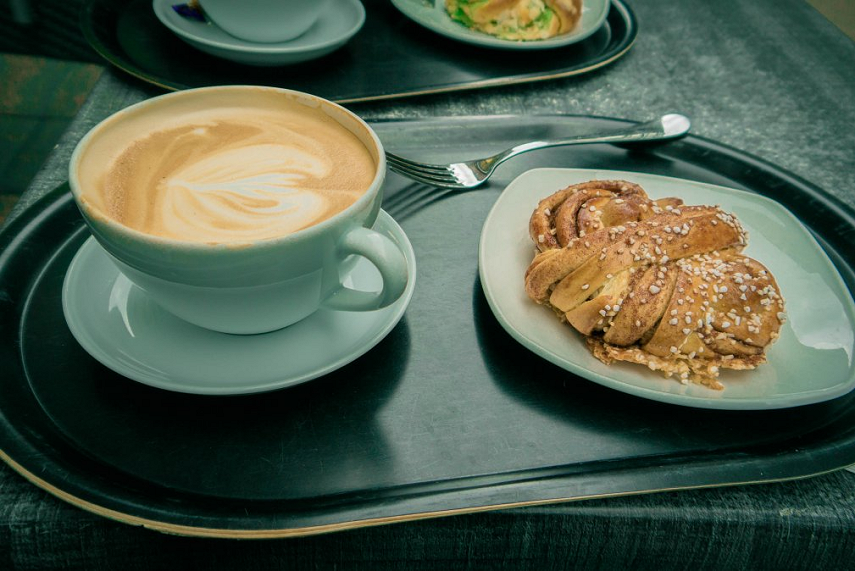 An inexpensive way to get some great food without breaking the bank is to eat at one of the Helsinki markets. The market that runs along the harbour front has several stalls selling Finnish delicacies including a famed salmon soup which is hearty and absolutely delicious. We purchased this for lunch on our final day before flying back to London and it kept us going all day… for just 7 euros!

For a sweet treat I would also suggest a little trip to the undercover market on the harbour and indulging in a Danish (or Finnish?) pastry or Swedish Prinsesstarta (yes that’s right, it’s a princess cake!)

There’s a ready-made Finnish sauna experience waiting for you right in the centre of the city at Allas Sea Pool. The best part is that it only costs 12 euros for a wristband that gives you access to the sauna and pool all day – and you can leave and return as many times as you like.  This was easily one of my favourite activities in Helsinki! 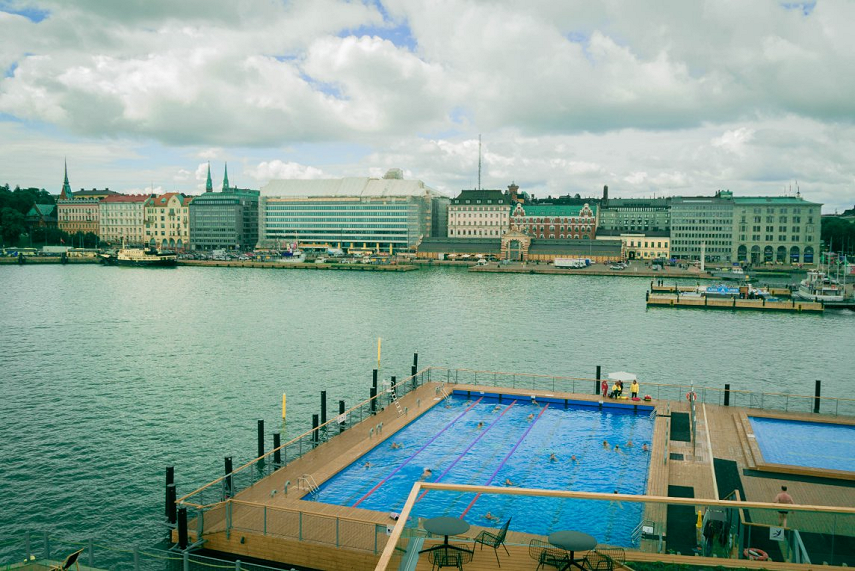 Get the best view of the city

While you won’t want to be consuming too much expensive alcohol if you’re travelling Helsinki on a budget when it comes with a free view you can definitely justify one little treat. I’m sure you’ll agree that wherever there’s an opportunity to get something with a view, rather than paying for a trip up to an observation deck in itself, it’s always worth taking… so Ateljee Bar in Sokos Hotel is where you should head to. 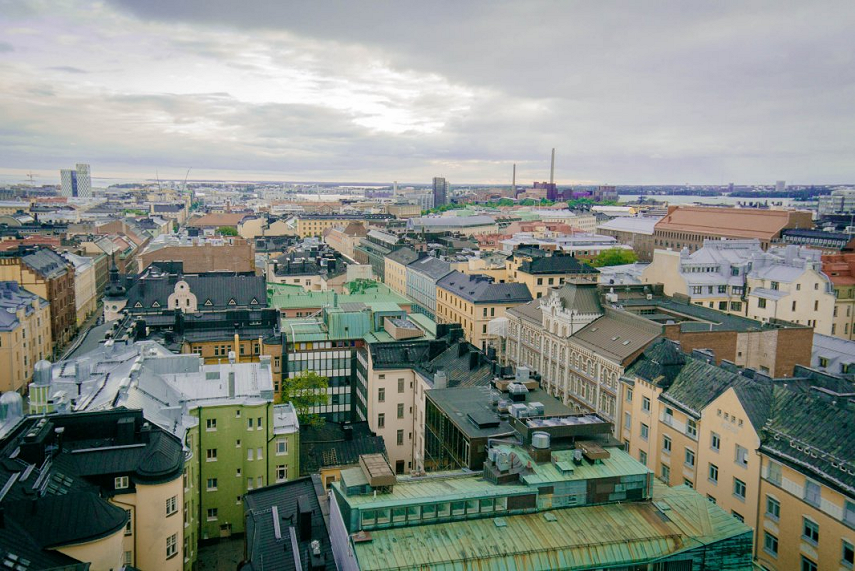 Upon entering the hotel you take the lift to the top floor and then enter a door that looks like a fire escape to climb a narrow spiral staircase up to a cosy little bar at the very top of the building. A little warning that it does get busy, we went in the evening on a weeknight and there was almost no space inside, which meant we did have to sit on the balcony on a not-particularly-warm summer’s night. There are blankets and some outdoor heaters but it is still pretty cold, however the view is excellent. If you want a cosy seat inside get there early and then pop outside for the photo ops!

Have you visited Helsinki and been to any of the places mentioned or got a great budget-saving tip I might have missed? Leave a comment below (especially if you’re a Finnish sauna convert because I’m desperate to find some fellow enthusiasts!) 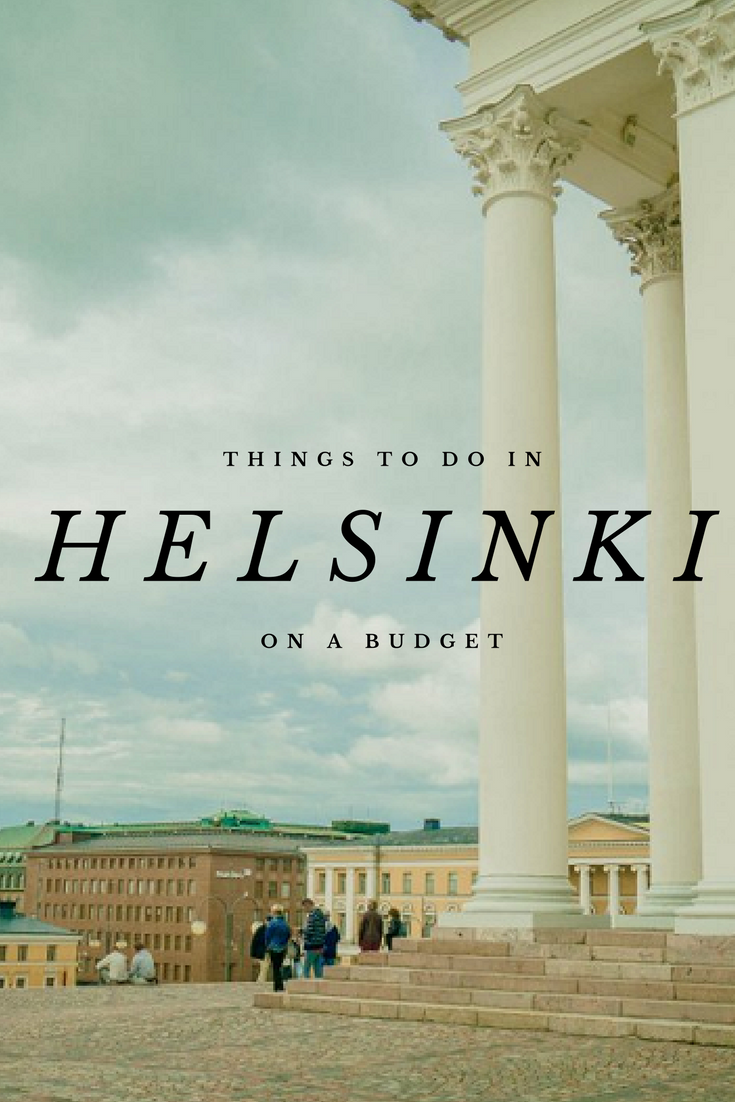 Plan the perfect holiday in Australia for your travel style