Home Europe Is the hike to Pulpit Rock (Preikestolen) worth it?
Europe

I first came across the Pulpit Rock hike when I was researching for a trip I took around Norway back in August 2015. I immediately knew I wanted to do this walk and experience the amazing view over the Lysefjord for myself but there was no way we could figure out how to fit it into our two week itinerary as it would involve a specific trip to Stavanger, which was a little too far from Bergen to justify taking the time for. Instead I vowed to come back and tackle it someday in the not too distant future. 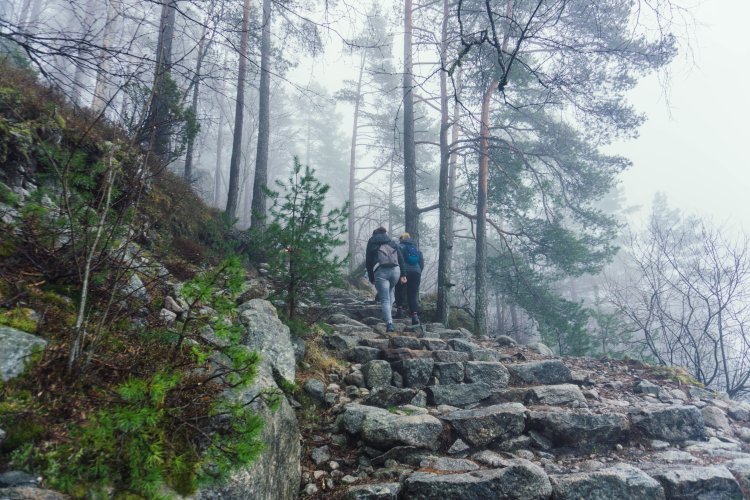 Which brings us up to last Saturday, where I am standing at the Preikestolen Mountain Lodge at 9.00am ready to begin the 2 hours trek up to Pulpit Rock to witness one of the world’s top 10 views (Lonely Planet says so!)… except it’s looking decidedly overcast. In fact there’s not even the slightest hint of it clearing. I overhear a man in a high-vis jacket tell another hopeful who has just got off the same bus that there’s currently no visibility at the top and the best he can hope for is that it will “brighten up a little”.

However I haven’t given up hope. I have done my share of walking in hills and been up rather a lot of mountains and I’m aware of how quickly things can change. Whilst it was pretty obvious there would be no clear skies I couldn’t be sure there wouldn’t be a moment when it would clear and we would get to see a little glimpse of the fjord. Plus there was still 2 hours for the weather to change before I got to the top… 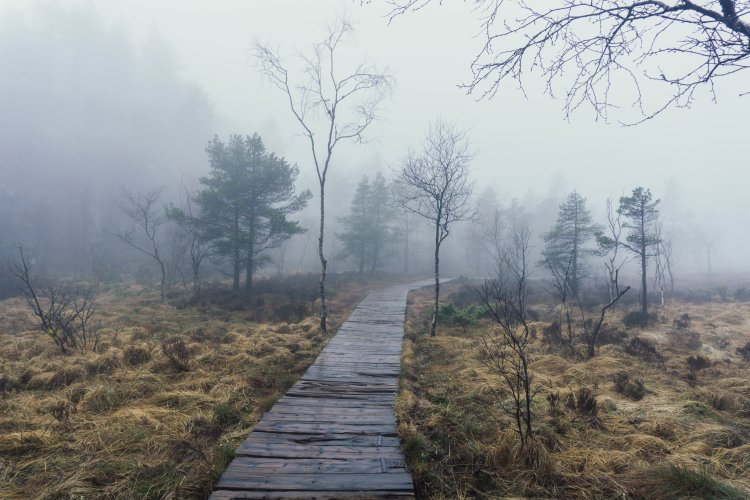 How wrong can a person be? As I got further and further along into the hike there seemed to be a dense fog creeping in. I could see only a few metres in front of me, which made finding the trail markers difficult in some of the flat expanses… note that it is well marked with T signs and would be okay under normal weather conditions.

I pretty soon realised there was no way I was going to even glimpse the fjord today. I’d be lucky to even see the rock! I’ve always been quite a fan of nordic noir but I’ve never really wanted to be in one… nevertheless it felt like I was. 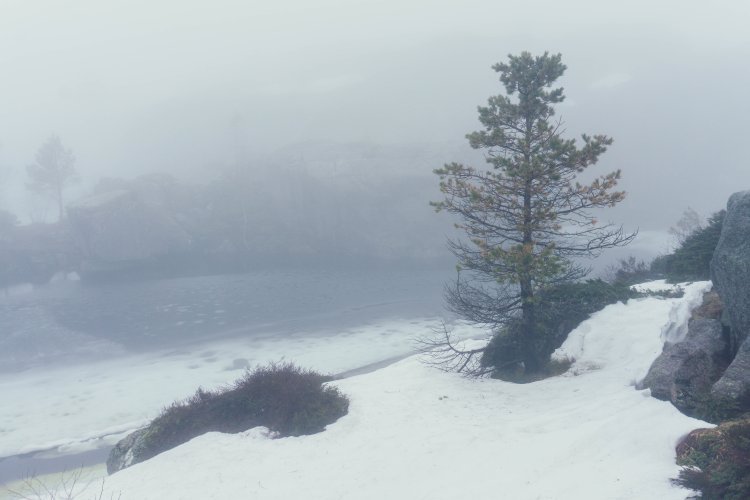 There was one final surprise waiting for me further up the mountain – snow! Yes they tell you to bring hiking gear for this trail but it is APRIL and I read a lot of advice that said it was unnecessary in the summer. Now I was wearing trainers and finding myself having to walk up slopes with slippery ice and snow that were far too close to the edge of the mountain for comfort. After trying to navigate the less well trodden and less slippy bits of the path and discovering that these were like quicksand where your foot would suddenly sink 20cm down to the bottom, I took to walking in the footprints already made by those who had gone before me… and a bit of shuffling in places.

Did I make it you’re all wondering? Well yes I did and I’m thrilled to say that the view was actually… 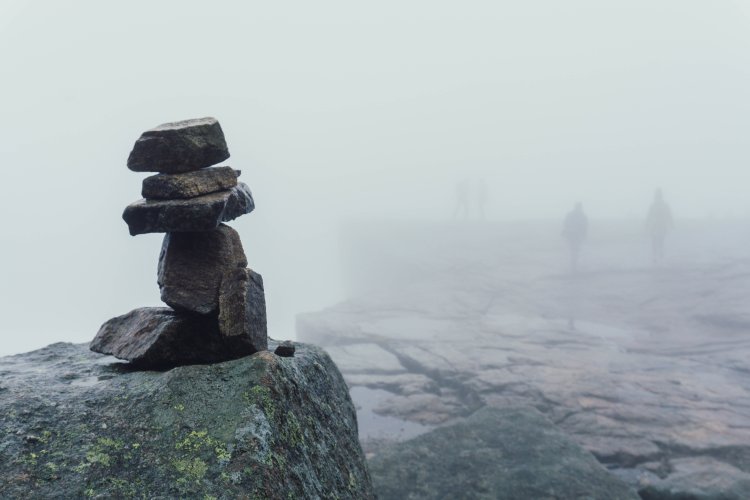 No of course it didn’t clear up! Can you even see Pulpit Rock in this photo? I could barely see it in real life.

Nevertheless this whole ordeal taught me some helpful information to pass on to all of you if you want to try the hike for yourself… maybe in the summer?

How easy is it to get there from Stavanger?

Okay so first up, it is really easy and relatively painless to get to the hike using public transport from Stavanger. Literally hundreds of people do this walk every day, even when the weather is bad, so there is a whole system in place for herding tourists to and from the starting point. 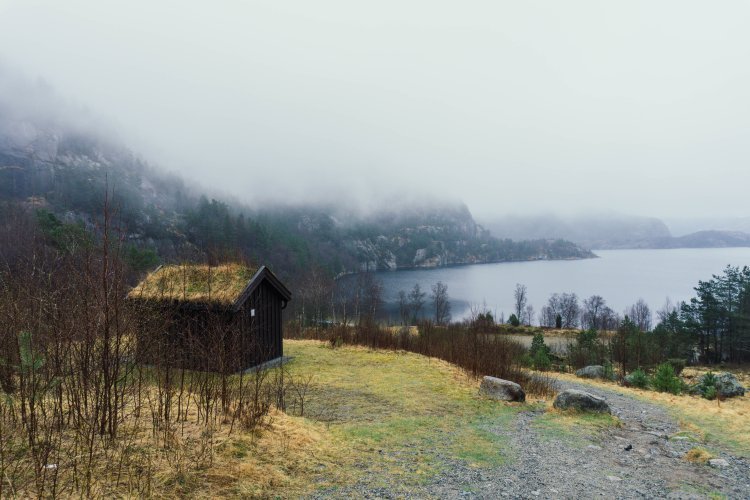 You will need to catch the ferry from Fiskepiren in Stavanger to Tau, you absolutely cannot miss it because it’s huge (and there will be loads of other people waiting to board). You just walk/drive on and they check your tickets on board during the journey. The crossing takes around 35-40 minutes.

Almost every ferry is met by a bus so it is likely there will be at least one waiting in the car park when you disembark. There are a couple of different bus companies that transport people to Preikestolen Lodge at the start of the hike so if you have pre-booked with a specific company you need to board the right bus. From here it is about 20 minutes drive to the car park when you start the hike from.

I took the bus run by Tide and pre-booked a combo ferry and bus ticket on their website. They also have a timetable showing the connections to help you plan your trip. 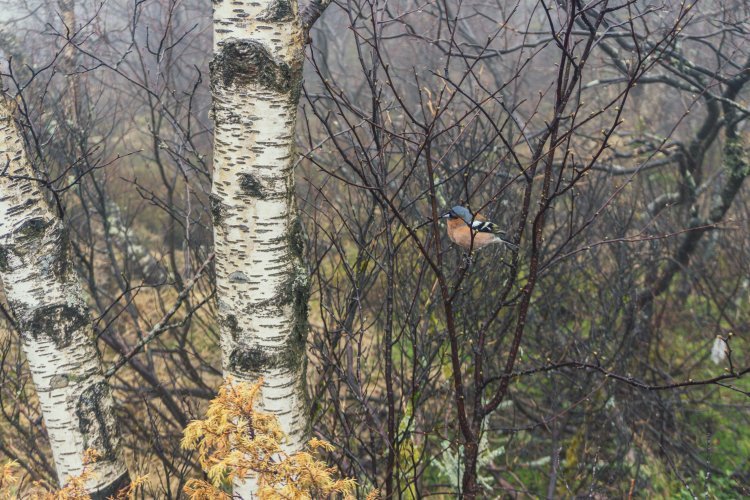 Should you pre-book your tickets?

I would highly recommend pre-booking unless you are not sure whether you’re 100% going to do the hike until the day… maybe you might think it is sensible to check the weather, especially after hearing this story!

It is not really necessary to pre-book the ferry as despite the popularity of the hike it is a huge boat and you’re not really ever going to have a problem boarding. The problem comes with getting on the bus. Now when I travelled even though the weather was clearly rubbish even from the start the bus still had every seat taken on the way to the start of the hike in the morning. If you cannot board the bus you have to wait for the next one and this is an hour’s wait (during high season) and sometimes longer in the low season months. 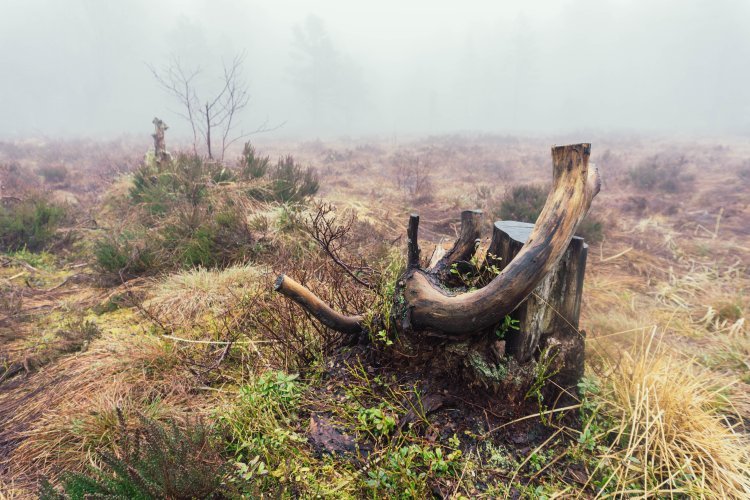 A word of advice…

Considering that the hike takes 4 hours as a round trip the buses are not very well timed to coincide with your return. As an example I got the second earliest ferry (there was no bus to meet the earlier one so I could not have got there are quicker) and I ended up having to get the last bus back. This is because the hike took me just under 4 hours and I set off at 9.00am. I got back at 12.45pm and missed the previous bus by 5 minutes (it leaves at 12.40pm), the next one was not until 2.55pm!

Not only did this mean I had to wait around for 2 hours but it also allowed time for the people who had travelled up there on my bus AND the following bus to return, and then there were over 2 busloads of people all trying to get on to the last bus. There are literally no more trips back to the ferry so if you don’t get on it you’re effectively screwed. It was a stressful time let me tell you and pretty badly organised!

You probably would not have this problem in the high season but although many people do the walk from April through September, the more frequent buses do not start until June. The reasoning for this is a mystery to me as it doesn’t actually get dark in Stavanger until gone 9.00pm at this time of the year. 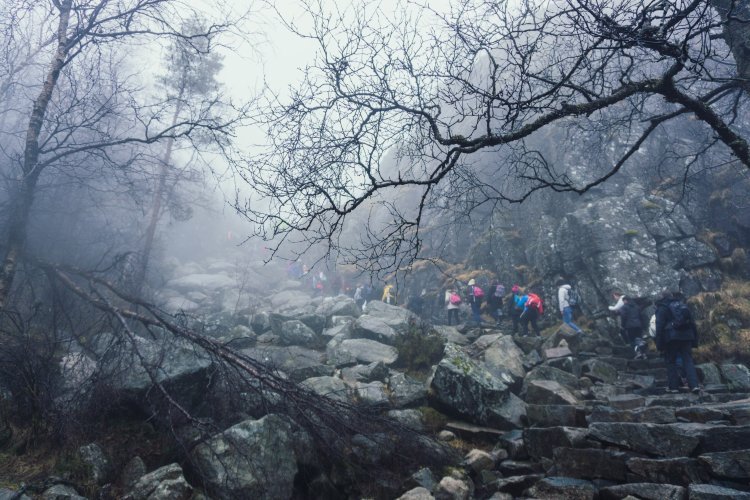 Is the hike difficult?

It’s not easy but under different weather circumstances it would not be hugely difficult so long as you are of a relative physical fitness. It was described somewhere I read as “strenuous and difficult in places” which is accurate. There were certain parts when I struggled but I’m not someone who goes to the gym or regularly exercises so if I can do it in the time specified and under near arctic conditions I can imagine some people would find it pretty straight forward. 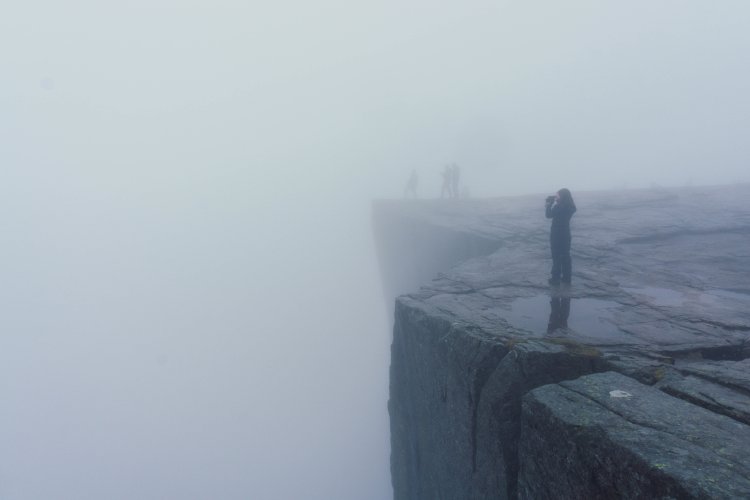 Was it worth it?

Would it be worth it on a clear day where you get an unparalleled view over Lysefjord, absolutely 100%. All you have to do is google what you should see up there and you’ll be easily convinced.

If the weather’s looking shifty I’d say still go. I’ve heard plenty of stories of people who said it was cloudy when they started and clear at the top. Similarly there might be pockets of cloud and you may be able to catch glimpses of the view at the top, you just don’t often know until you get up there! 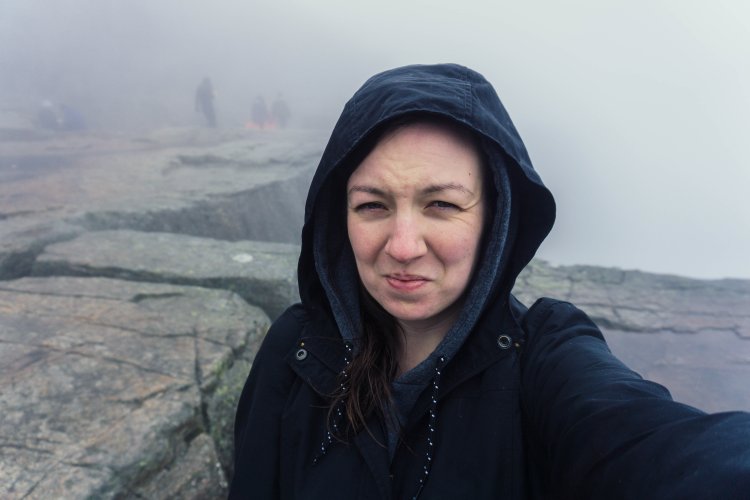 If there’s absolutely no way you’re going to see anything (i.e. it’s a day like when I went and it’s misty even at the bottom of the hike) then honestly it really depends on whether you’re going for the experience or for the end result. I was disappointed not to see anything at the top but I wasn’t devastated and part of the reason I wanted to do this was to challenge myself to do the hike so it didn’t ever cross my mind that I wouldn’t do it. I had also pre-booked my tickets and gone all the way to Stavanger especially so unless they had actually told people not to go I would have continued on with my plans whatever the weather. I also ended up enjoying myself in spite of everything and I would absolutely go back and try again in better conditions… my Pulpit Rock dream is not over yet! 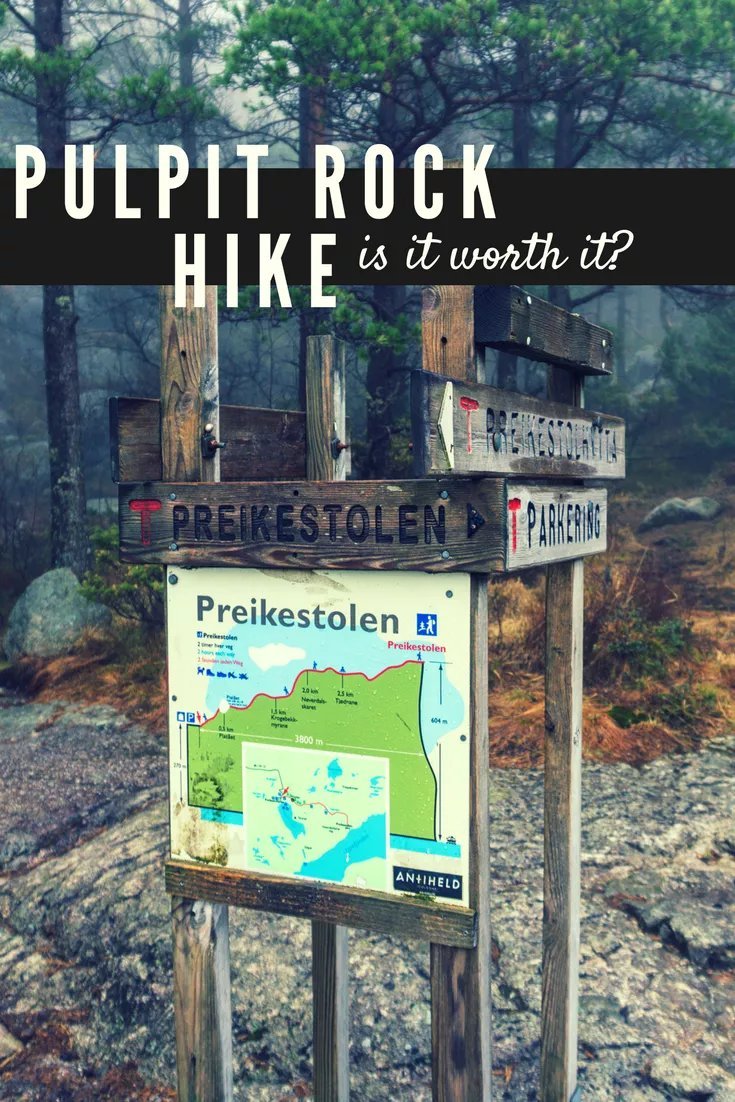