Visiting the Ancient City of Polonnaruwa was high on my list of anticipated activities for our Sri Lanka trip, however the fact that we were advised we would be cycling around them was somewhat of a concern. When you think of Sri Lanka, bicycles are not exactly the first method of transport to spring to mind, and the thought of potentially navigating a road occupied by tuk-tuk drivers and other cars in a place where road safety is really not a big concern was somewhat alarming!

However I’m pleased to report that our fears were misguided and everyone else is right… the best way to see the ruins of Polonnaruwa really is the rent a bicycle and go for a leisurely cycle around them! 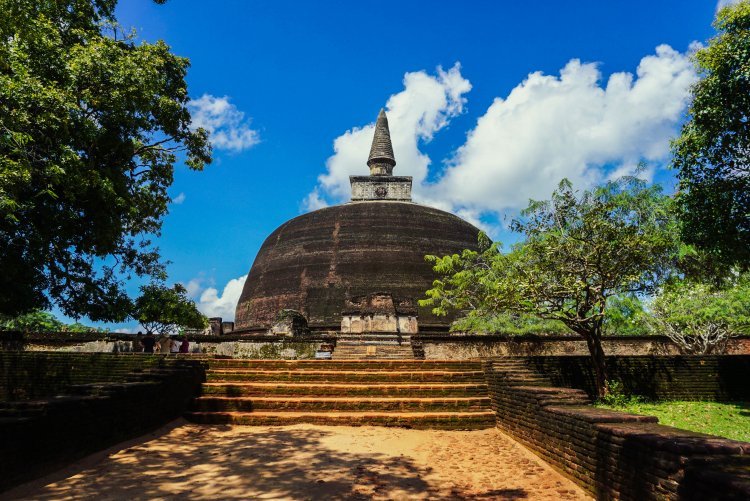 Why you should visit Polonnaruwa

Polonnaruwa is one of the key places to visit in Sri Lanka’s cultural triangle, the other two being Anuradhapura and Kandy, so if you’re into seeing more than wildlife and beaches on your Sri Lankan trip then you should definitely try to squeeze this into your itinerary, especially as it will give you an idea of some of the ancient history of Sinhalese culture.

The Ancient City of Polonnaruwa is unlike anything else we saw in Sri Lanka and it is unusual to be able to see some many different types of ruins within such a close proximity.  Most of them are also incredibly well preserved considering how old they are (built in the 12th century) with some only really having lost their roofs!

One element I particularly appreciated was being able to compare these ruins to the sites we saw later on our trip. Polonnaruwa was the second capital of Sri Lanka and home to Sri Lankan royalty and the Sacred Tooth Relic (more on that later!), which is now housed in the Sacred Tooth Temple in Kandy. We were able to see the ruins of the Tooth Relic temple in Polonnaruwa and then see the current Tooth Temple in Kandy and directly compare the two. 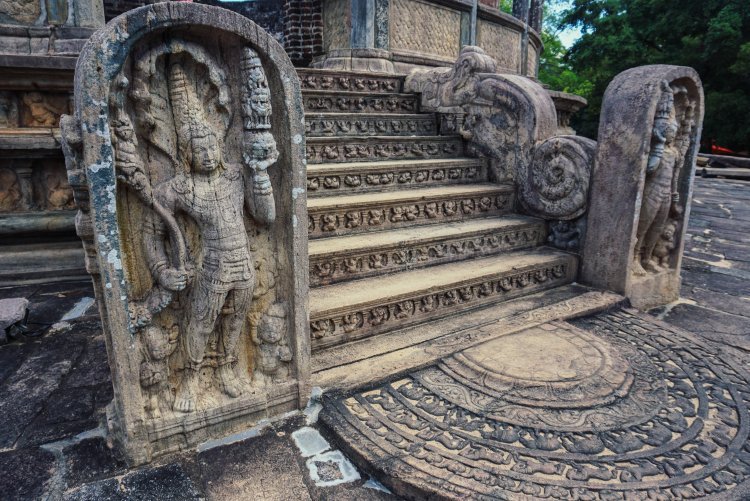 Bicycles… the best way to get around

While the ruins are all in a confined area it would take a little while to walk between them but it is probably not far enough to be necessary to hire a tuk-tuk. Bicycles give you a happy medium and are the most popular way to traverse the area, which means you’ll find lots of other people doing the same!

The area you’ll be exploring is a large green park-like space with wide pavement paths so while you will get the occasional car or coach full of tourists overtake you, it’s not anything like driving on Sri Lankan roads and we always felt perfectly safe! The biggest hazard is probably other cyclists, but even then there aren’t that many. Whilst it is popular, compared to some other attractions in Sri Lanka we found Polonnaruwa to be relatively quiet. The area is undoubtedly up-and-coming and there is a visible effort to bring in more tourists but at the time we visited (which was the height of tourist season) there were surprisingly more Sri Lankan schoolchildren than tourists. 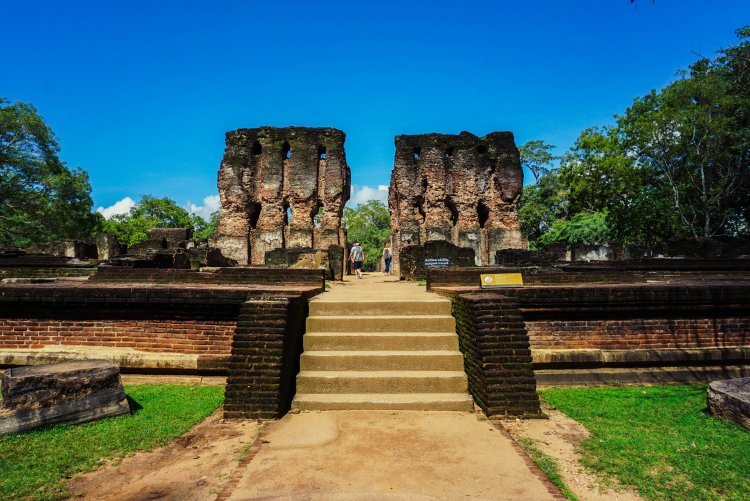 Tickets for entry to the site of the ruins are purchased from the ticket office at the Polonnaruwa Archeological Museum nearby. I believe they are around $25.00 (USD) and you also get entrance to the museum, which is worth a look around to give you an idea of what you are about to see. You should also get a map of the ruins site (ask for it if not offered as I have read sometimes it is kept under the desk).

You will find multiple places to rent bicycles outside the entrance to the ruins site. Some people rent them at the museum and cycle down to the park entrance but that does involve a (perhaps perilous?) 3 minute cycle down an actual Sri Lankan road!  Alternatively there are some places to hire at the gates which only involve you crossing the road with the bike and then you’re in the park… a much safer bet! Don’t forget you can pretty much haggle for anything in Sri Lanka so don’t take the first price you’re given by the guys in charge of the rentals. 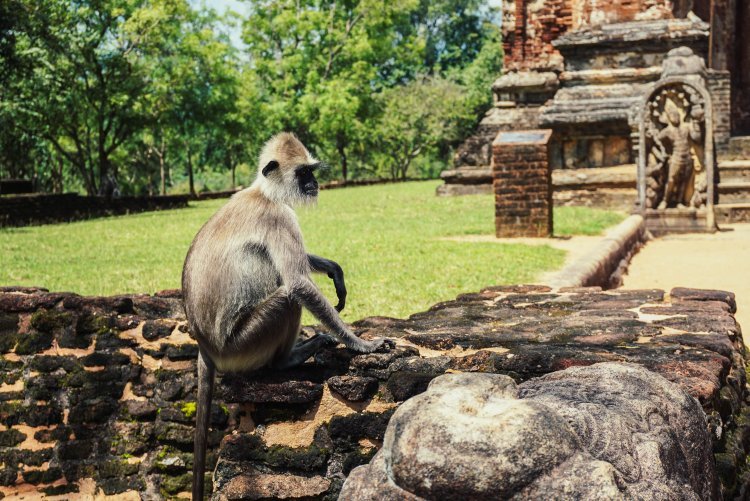 Know before you go…

Watch out for the monkeys

If you’ve been in Sri Lanka for any period of time before your visit to Polonnaruwa you’ll probably have already encountered their cheeky inhabitants. It is also something you will be warned about many times by Sri Lankan people. While some people seem to have perfectly okay encounters with the monkeys it is best to be wary of them as they can be aggressive or mischievous to the point of inconvenience (ever had a monkey run up a tree with your passport? It happens!)

A little guide to different monkeys you might see around Polonnaruwa to help you navigate your way with them… we were told that the red-faced monkeys (Toque Macaques) were the more aggressive of the species and should definitely be avoided, whereas the Grey Langurs are more docile. After some googling I cannot find any evidence of this so maybe it was based on personal experience? Either way, I was less worried about getting close to the langurs and they certainly seemed more serene! 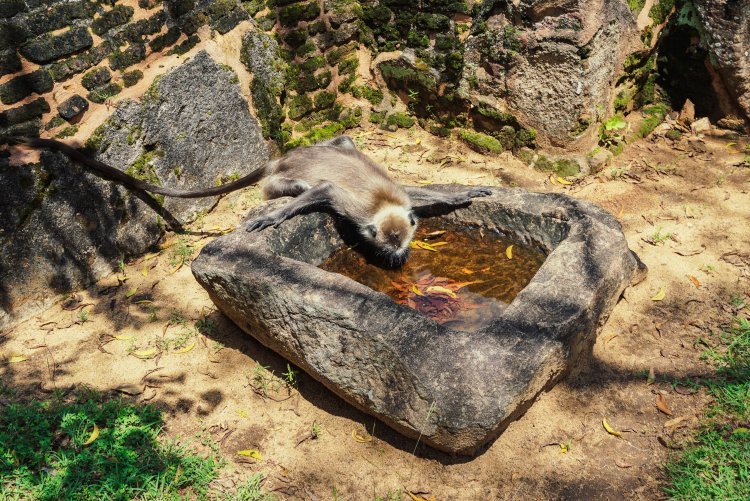 Wear shoes that are easy to remove

I made a bit of a mistake here but because I knew we were going cycling I decided it was best to wear trainers/runners on the day we did this trip. I soon discovered this was a silly move as they probably take the longest amount of time to put on and off of all shoes!

Even though the Ancient City of Polonnaruwa is made up on ruins this is still a holy site and thus treated as any other Buddhist temple would be. You have to remove your shoes before entering many of the ruins, and so you’ll be doing this a lot (there are signs to signify when it is necessary). In contrast the cycling is not hard so you don’t need really sturdy shoes, most people wear sandals. 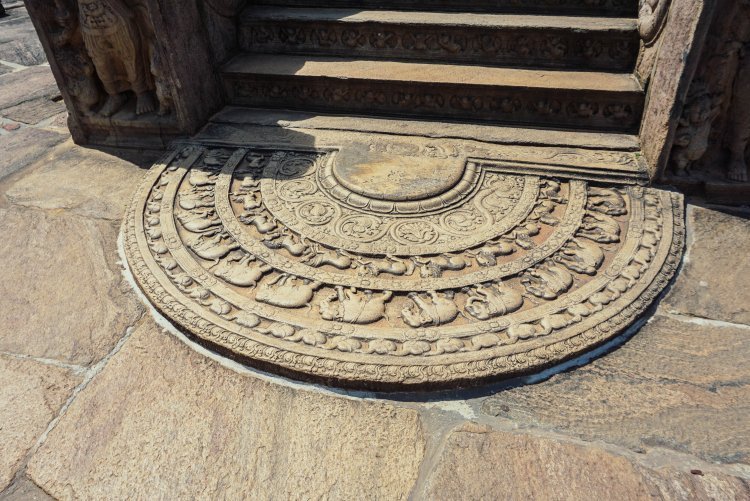 It can be a bit hard to know the etiquette for taking photographs in holy places such as this. We were lucky to have a guide to ensure we didn’t make any faux-pas. I personally always air on the side of caution when I’m not sure so it was great for us to have someone to tell me it was okay to take a photo or I would’ve come back with a lot less than I have! A couple of tips that should get you through most places… 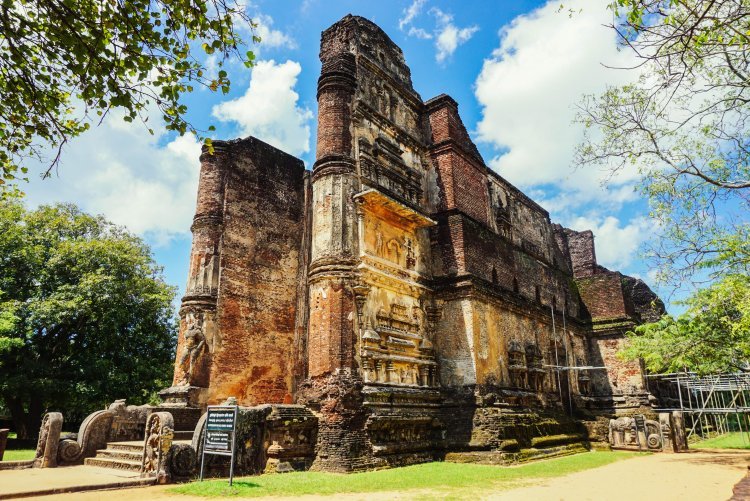 One thing to be aware of it that although the ruins are in a large park area there is little to no shade or sun protection in the areas where you are walking or cycling around.  I would say that taking a hat is absolutely essential as you’re likely to be exposed to the sun without respite for a good few hours. Also take the usual Sri Lanka staple supplies… water and suncream.

If at all possible then avoid going in the height of the midday heat. Due to the way our itinerary worked we ended up having to do certain activities in the hottest parts of the day (this being one) and were fine because we took the above precautions but obviously the ideal situation would have been to do it earlier or later.

Let me know in the comments if you have visited Polonnaruwa and what you thought or any other ancient sites that you think I might like around the world. At the moment I am desperate to explore the Acropolis of Athens! Thanks for reading and I’ll be back to share more from Sri Lanka soon! K x 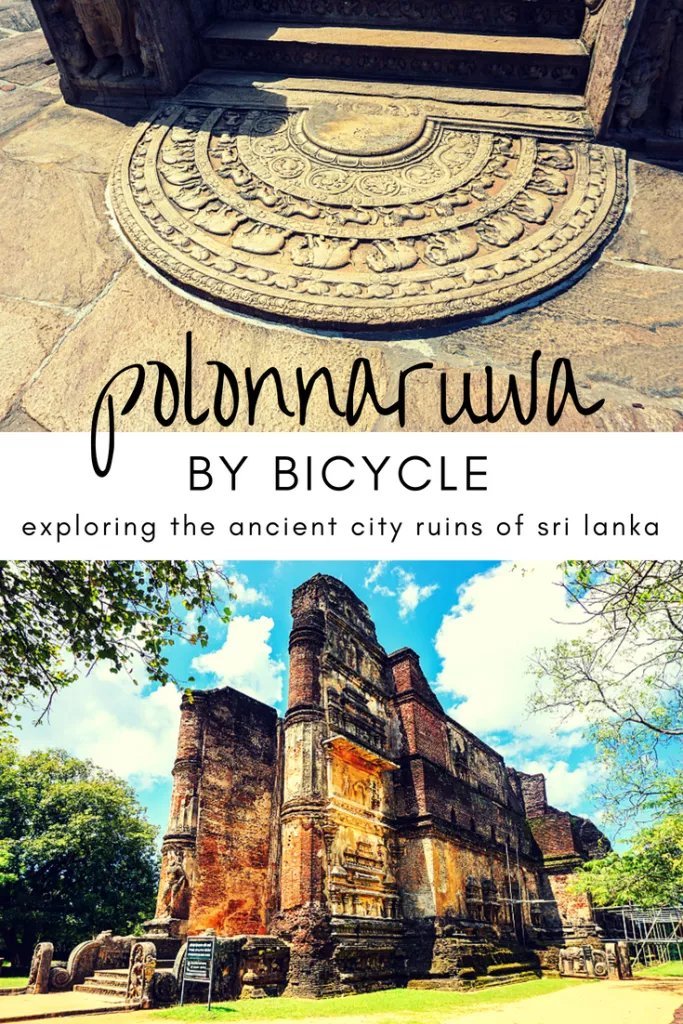 What you need to know about climbing Sigiriya Rock

Hey, Where did you leave your bikes while you were in the ruins?

Hi Thomas, we actually just left them nearby, either down by the path or wherever other people had left them. There are loads of people cycling around and they leave their bikes too so it’s really safe. We were told it was fine to leave them unoccupied but to just take our belongings with us. Hope that helps!