You may not have heard of the South Caucasus region before but you have probably heard of the countries it encompasses… Armenia, Georgia and Azerbaijan. I have to admit that I know next to nothing about this area of the world and I love finding places off the beaten track so I was really keen to find out more about what there is to do there! I have seen a lot more travellers visiting these countries recently and they look so beautiful but they also have so many historical gems to discover. I enlisted the help of Andy Brodwich to share with us 9 amazing places of historical significance that will have you wanted to book your ticket to the South Caucasus region right now!

The South Caucasus region, which includes the countries Armenia, Georgia and Azerbaijan, is an amazing place for travellers who are looking for the chance to explore ancient monuments, architectural masterpieces, and historical towns. Read on to find out more about the best historical places to visit for an amazing unforgettable trip to South Caucasus… 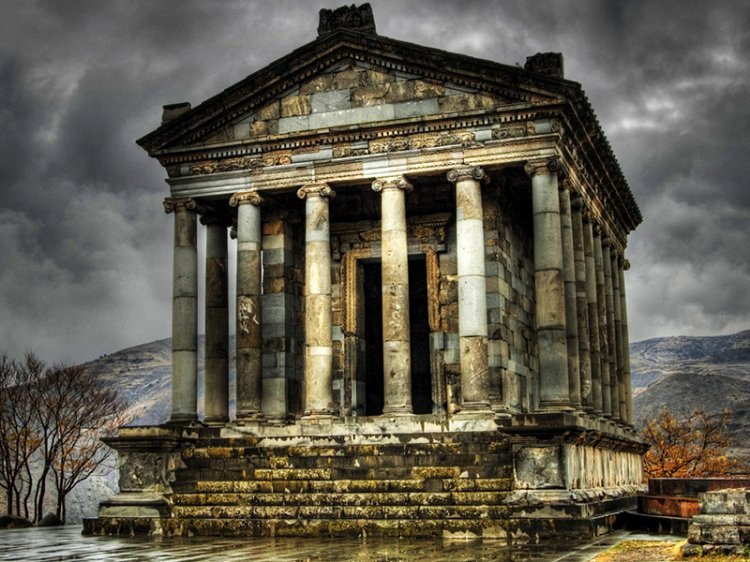 Armenia is the first country in the world that adopted Christianity as a state religion, it is a country of ancient churches, monasteries, cross-stones and sincere prayers. The transition to Christianity in 301 was radical and at that time all pagan temples and monuments were completely destroyed, only the Garni temple to the sun god Mithra has survived.

Garni was built by the Romans in the classical Greek style and looks like the famous temple in the Athenian Acropolis. The temple has 24 columns to symbolise the hours of the day and huge basalt steps that lead to the temple. Walking up the high steps one had to bow down to overcome the height. The walls, ceiling and columns are richly decorated with ornaments and in the centre there is a stone bowl filled with water or oil. At certain times of the day the rays of the sun shine through the columns on to the polished stone and reflect in the waters of the bowl the illuminated statue of the god Mithra.

An ancient palace, bath and fortress are located on the territory of the temple. The baths have a multi-coloured mosaic floor and in the center there is a Greek inscription reading “Ocean” and “Sea”. The fortress of Garni was built in the 2nd century BC and played an important role in the defence of the region. 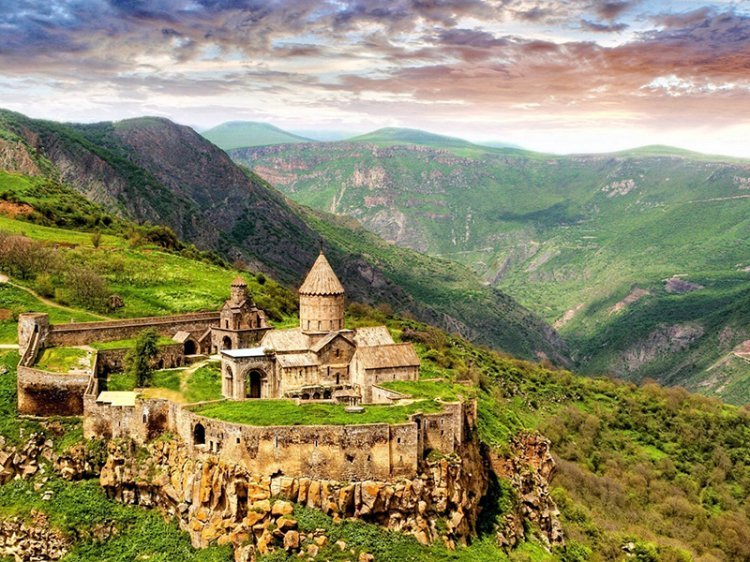 The monastery complex Tatev of the 9th century is one of the largest and most important historical and religious monuments of Armenia. The monastery is located in the most picturesque region of the country in a remote area above the Vorotan gorge. The passage of such a path is nothing short of a pilgrimage.

The name of the monastery is translated “give wings” as according to legend, the master’s pupil was heard rushing from the monastery’s dome praying to God to give him wings. The main church of the ensemble is the church of St. Peter and Paul (906). The monastery complex includes the very first building, the Church of St. Grigor the Illuminator (848), the church of St. Astvatsatsin, the bell tower, refectory and living quarters. The most interesting construction is the Gavazan monument, a pillar 8 metres high, which sways even in a small wind, but miraculously has not yet collapsed. 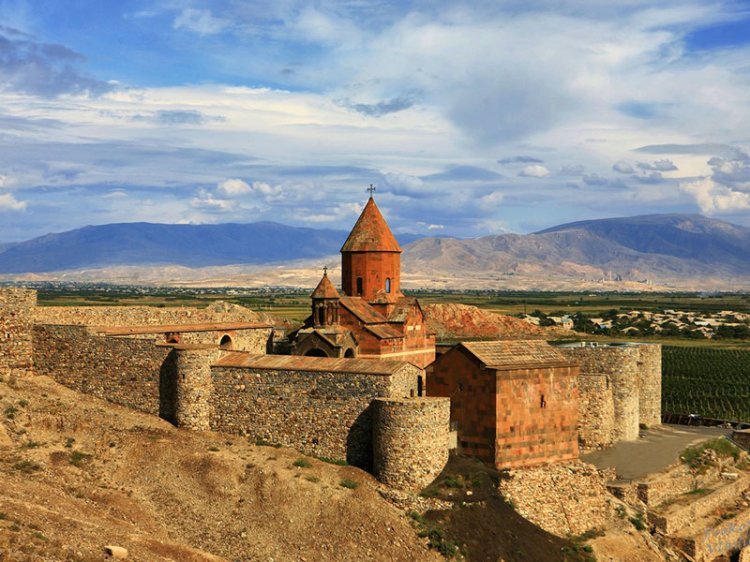 Khor Virap is the place where the history of Christian Armenia began. This is one of the main shrines of Armenians and the most important part of the history of the country. The monastery complex and fortress were built in the 17th century on a hill with the best view of the sacred Ararat mountain.

The site of the monastery has had different roles in history including as pits where royal prisoners were sent to their death. The pits were filled with snakes and insects and no one returned alive. Gregory the Illuminator was sent to the pit by King Trdat for preaching Christianity in the pagan country. However, according to the legend, when the king got ill and only Gregory was able to cure him, King Trdat was convinced of Christianity as the true faith.

After the adoption of Christianity in 301, a chapel was built in the place of the pits, then a large monastery was built on the place of the chapel. The pits are now open for visitors, but not everyone dares to go down there due to the claustrophobic narrow aisles and steep staircases. 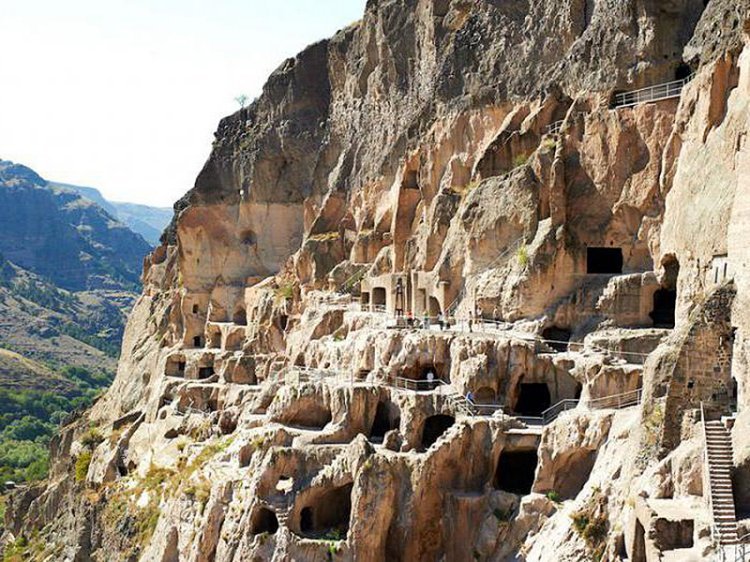 Uplistsikhe was one of the first settlements in the territory of Georgia. The cave city is carved into a rock and was inhabited more than three thousand years ago! The name of the cave city is translated as “Fortress of God” or “Fortress of the Lord”. At one time the cave city was a pagan centre with temples. According to legend, the niches and cave passages were cut by slaves who were given their freedom in exchange for the work.

The most impressive of the “buildings” in Uplistsikhe is the hall of Queen Tamara, where the queen was married and crowned. The Great Hall has two columns, arches and pylons, painted ceilings, the remains of pitchers and a well in the centre.

In the 14th century, the cave city was buried under the sand and it has taken a lot of time and energy over the years to uncover and restore it. Uplistsikhe is now a designated UNESCO World Heritage site. 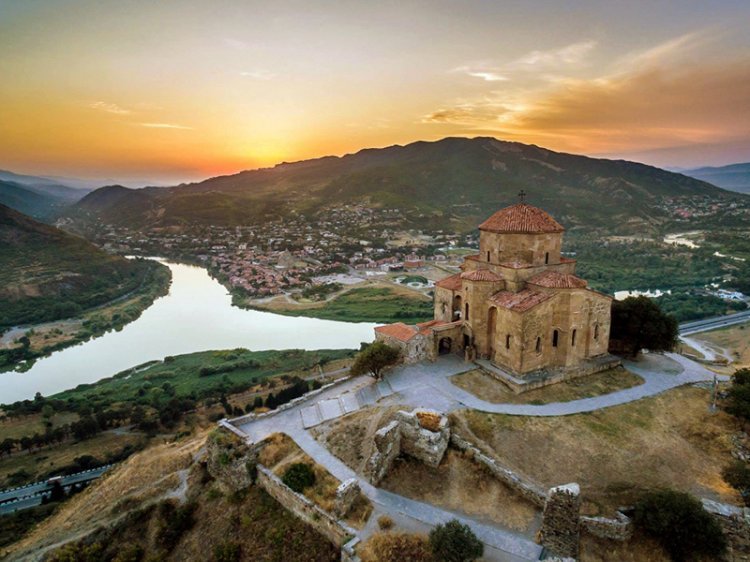 Mtskheta is the religious centre of Georgia, the first capital and one of the oldest cities in the country. The city was founded in the 5th century BC and, according to one theory, the modern Georgian civilisation was born in this very place. The city is located where the Aragvi and Kura rivers merge and is surrounded by formidable ridges.

It is a city of temples and churches and there is also a museum with multiple historical monuments. The main temple of the city is Svetitskhoveli Cathedral. It is considered one of the most important sacred places not only in Georgia but throughout the entire Christian world. The second most significant monastery is Samtavro, a functioning women’s monastery where the relics of the saints, the tomb of King Mirian III and the stones from the grave of Nino can be found.

One of the popular attractions of Mtskheta is the ruins of the ancient city of Armazi and the citadel of Armazi. There are other important monasteries of Georgia close to Mtskheta including Jvari temple, Shio-Mgvime monastery and Zedazeni monastery. 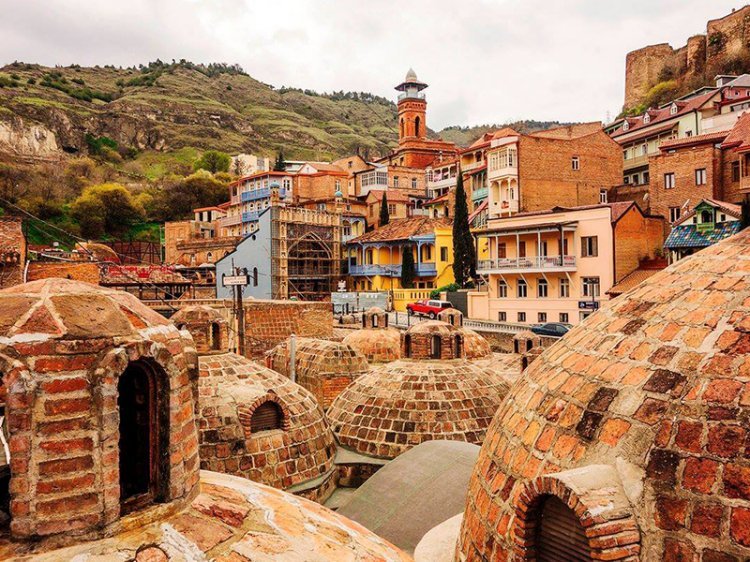 The history of Tbilisi is closely connected with sulfur baths and these have become a popular place to visit in the area. The construction of the city on the site is said to have been ordered by King Gorgasali specifically because of the discovery of the sulfur there. The name Tbilisi translates as “warm”.

At that time sulfur baths were not only a place where people bathed but a communication hub, where people came to discuss the latest news and gossip. The baths were divided into several sections for princes, officers, nobles and baths for commoners.

Today, the sulfur baths have been discovered to have health benefits and some of them have been turned into hydropathic institutions. Baths are located in the Abanotubani area with more than 10 baths situated in the basement. The most popular of them is Chreli Abano or Blue Bath. The building is covered with a beautiful multicolored mosaic and resembles a mosque. 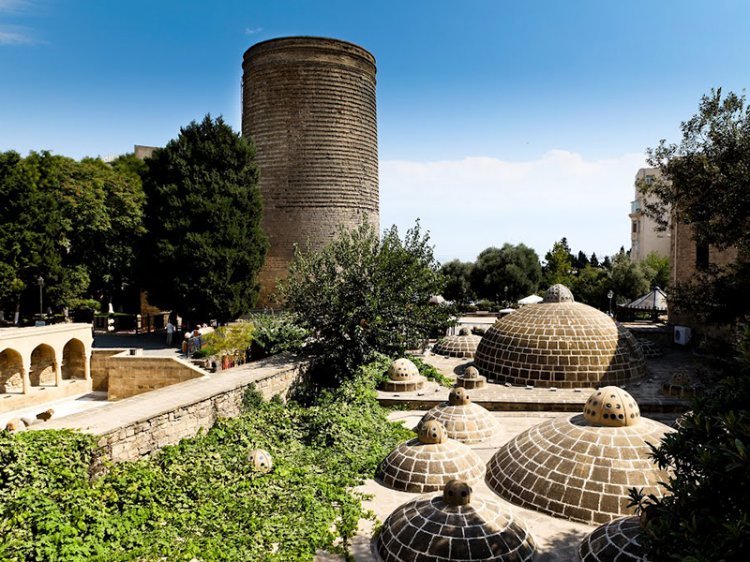 The main symbol of Baku and the Old City is the Maiden Tower. The structure was built in the 12th century as one of the towers of the fortress guarding Baku. Under the rule of the Russian Empire, the tower served as a lighthouse but after the revolution the lighthouse stopped functioning.

Several legends are connected with the Maiden Tower. One tells the story of the tower’s name. The Shah of Baku decided to marry off his daughter and so she requested that the tower was built before the wedding. When the tower was ready she climbed to the top of the tower and threw herself off to avoid marriage to a man she did not love. Another legend says that the apostle Bartholomew was killed at the doors of the tower. Every year there is a liturgy in his honour.

Today the tower attracts a large number of tourists. The observation tower offers the best view of the Old City and modern Baku. 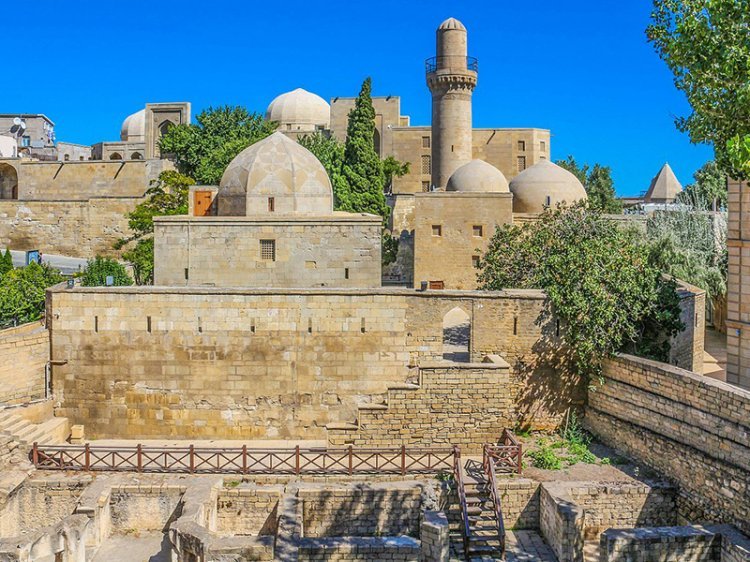 The Palace of Shirvanshahs, Azerbaijan

The  Palace of the Shirvanshahs is considered one of the most popular sights of Azerbaijan. The palace was built in the 15th century and became the residence of Shirvan Shahs. The palace complex comprises of the main palace building, Keigubad mosque, Shah’s mosque, Murad’s Gate, burial vault, bathhouse, tomb of the court scholar, reservoir and Divankhana (courthouse). The main palace building alone has 52 rooms!

In 1501, the palace was partially destroyed by the Persian troops of the Safavid dynasty. In 1964 the palace became a museum in the Old City and the building is now protected by the state. 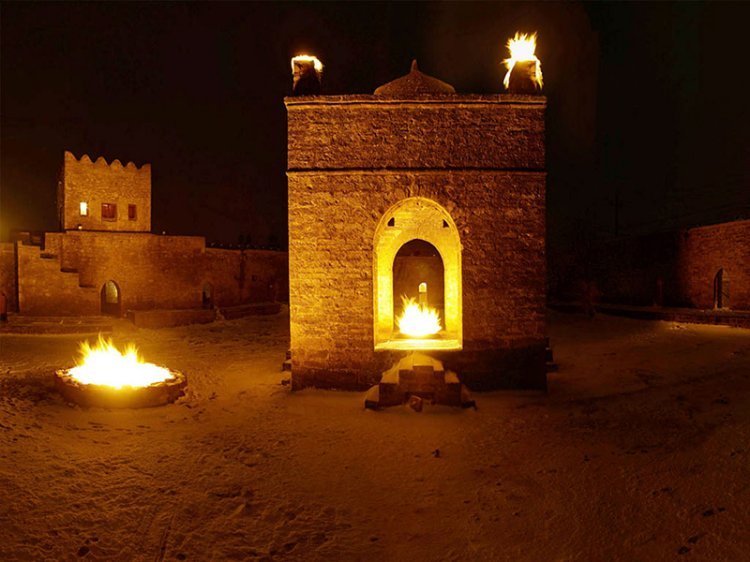 In the village of Surakhani, 20km from the capital of Baku, you will find the Ateshgah Temple of Fire.

Ateshgah (which translates as “house of fire”) temple was constructed after a natural fire that occurred there due to underground gas convinced fire worshipers that the place was holy.  After the discovery of oil deposits in 1855, the eternal fire gradually began to weaken and finally faded. The fire-worshipers took it as the wrath of the gods and left the temple. It lay empty for many years.

In order to lure people back to the site the temple was restored and the fire began to burn again. Today, there is a museum on the site with wax figures telling the story of the fire worshipers between the 17th and 18th centuries.

I don’t know about you but all of these places look incredible and have peeked my interest in this region even more. Thanks once again to Andy for providing some new wanderlust inspiration!

I think that Maiden Tower it is magic place… my first visit was last summer!
Good luck!

Excellent post! Tatev is one of the most beautiful places where I was. It will be necessary to visit other places from your list