5 of the best ancient sites to visit in Athens

I’ve been seriously thinking about visiting Athens for a few years now and I’m so thrilled that I finally got there as the first stop on my trip around the Balkans this year! I have wanted to see the Parthenon for as long as I can remember but I was surprised by how many other impressive ancient sites there are to discover too. It seems as if there is an amazing archaeological site or museum on every corner of the city! It was tricky but I have narrowed it down 5 of the best ancient sites to visit. These places will give you a perfect taster of ancient Greek history if you are on a city break.

It would be ludicrous to start with anywhere other than the most famous Ancient Greek site of them all. Situated above the city, atop the Acropolis, is the iconic Parthenon. It’s a place I’ve been desperate to see in person for a long time. In all honesty I had such high expectations that I almost expected to be somewhat disappointed when I finally got there… but I wasn’t! 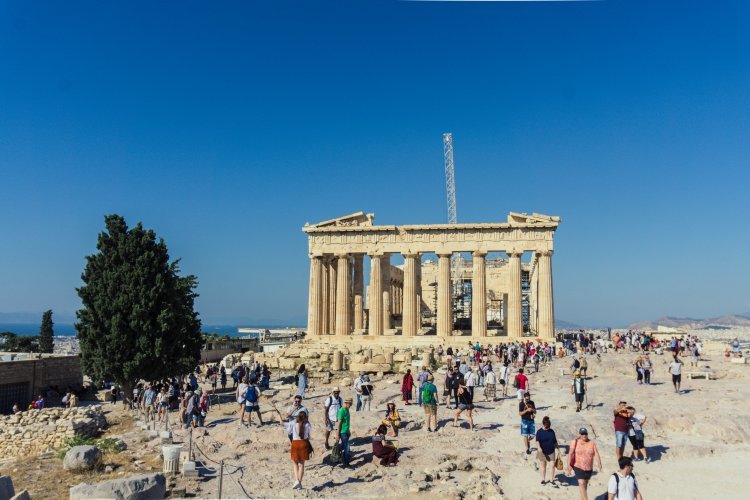 The Parthenon is popular for a good reason and I thought it was 100% worth putting up with the huge crowds for. There really is nothing else quite like it in Athens… or perhaps the whole world. You should be aware that at present (2018) it is undergoing a major restoration project that means some of the structure has scaffolding but this doesn’t really take away any of the majesty of it. I do not know when the construction work is supposed to be completed but I believe a few stop/starts have already pushed it back a bit and it is a major project so I wouldn’t let this put you off visiting in the meantime.

Many of you are probably interested in the least busy times for visiting the Acropolis. Avoid the middle of the day during the summer due to the heat and lack of shade. Many coach tours visit relatively early too though. I was there around 9.30am and many coaches arrived between then and 10.30am. By the time I left after 11.00am it was extremely busy and I would expect quite a queue at the entrance. The site opens at 8am so visiting before 9.00am or later in the afternoon/evening is best if you can. 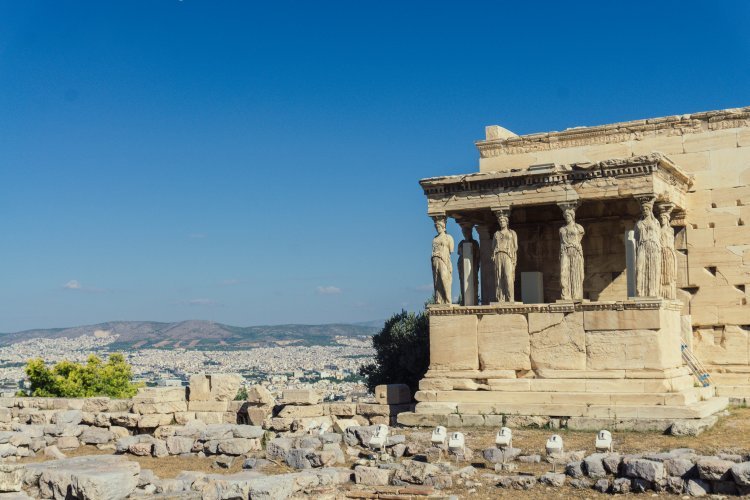 The Temple of Olympian Zeus was my first stop in Athens. I hadn’t known about it at all prior to this trip but after some research it seemed like a popular site so I decided to check it out. It is a very large site with a lot of open space and at the center are the remains of a huge colossal ancient Greek temple. I think this is the biggest temple I that I saw in Greece, or at least it felt like it! 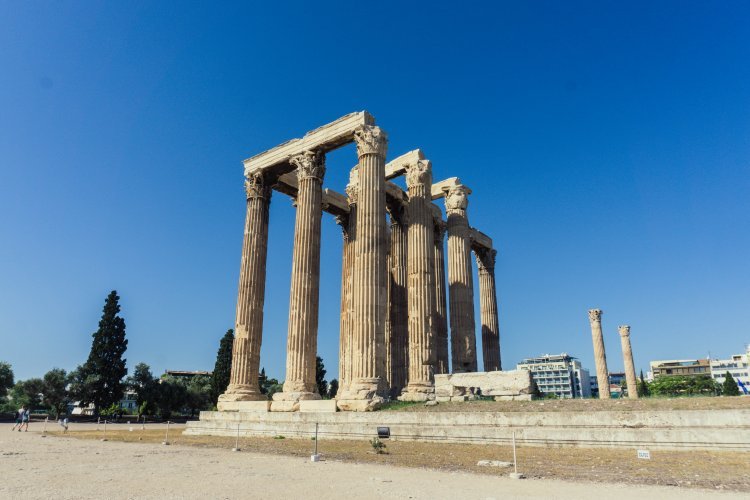 Despite the fact that it fell into ruin quite early on in the period it is still a really iconic site in Athens due to how much of it remains intact. There are 16 giant columns, of which 15 are standing and 1 lays flat on the ground where it was blown over in a storm in 1852. What is really interesting about the column on the ground is that it is  broken into pieces so you can see how it was made up. They all look so incredibly imposing and solid I can’t imagine a storm bad enough that could knock one of them over!

As with many of the ancient sites in Athens you will find that there is very little information about what you are looking at so it is worth doing some research beforehand or taking a guidebook. There is one board with a couple of paragraphs of information at this site as you walk up the path after the ticket turnstile. 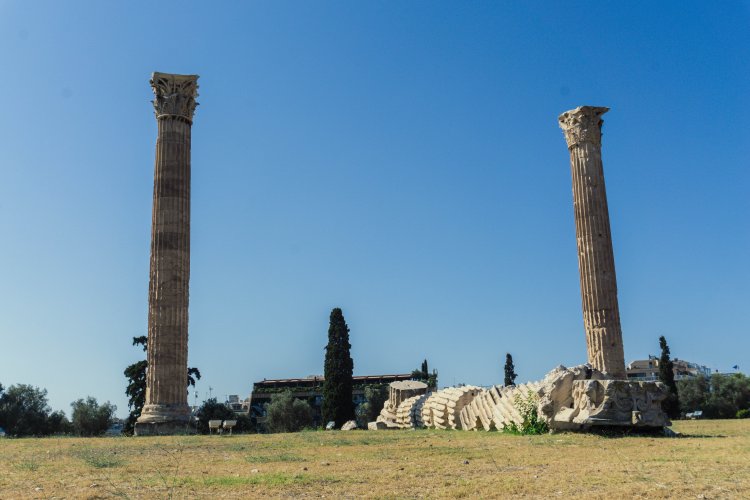 The Ancient Agora of Athens is the best surviving example of a Greek agora and is located very close to the northwest slope of the Acropolis so it is really easy to combine the two sites in one day. It is quite a large site compared to some of the others so allow for a good couple of hours here to see everything. 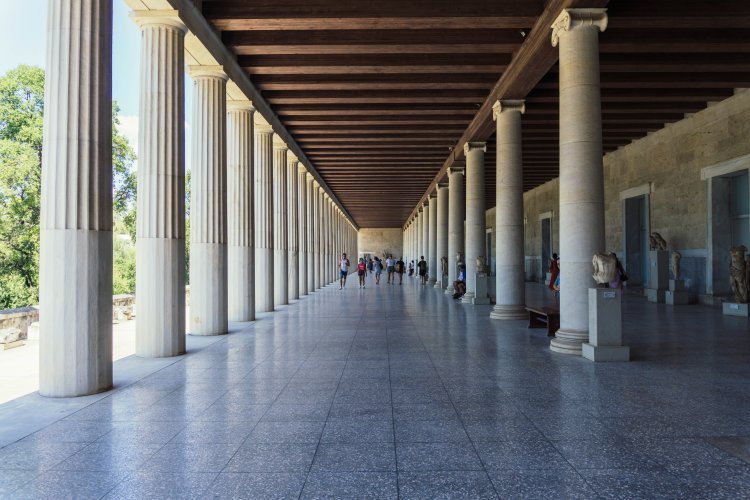 There are two standout buildings. One is the Temple of Hephaestus, which almost looks like a mini Parthenon, situated on a hill at one end of the site. The other is the Stoa of Attalos at the other end. If this looks remarkably preserved it is because it is actually a reconstruction of the original building. This version was built in the 1950s and now houses the archaeological museum for the site. I really loved the idea of rebuilding this part of the site because it’s great to get an idea of how the building would have looked in its prime. It was said to be as faithful a reconstruction as possible and I think It definitely gives you a real sense of how impressive it must have been! 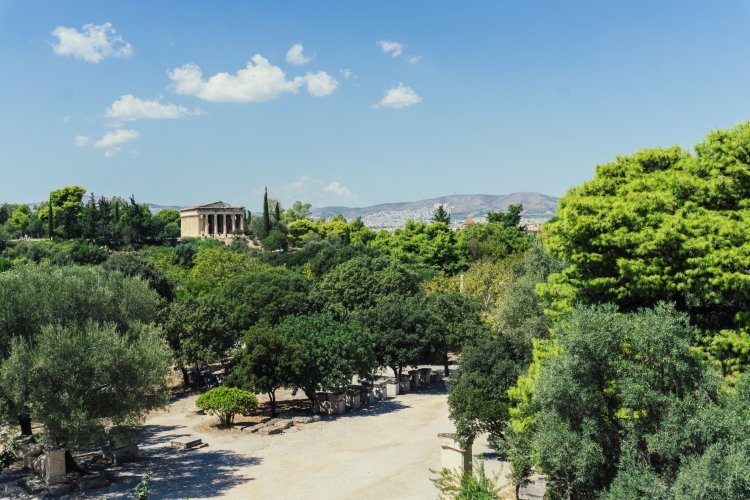 Hadrian’s Library is probably the least impressive of the ancient sites on this list but it is still worth a visit, particularly if you have a combination ticket for the Athens archaeological sites (more on that below). It is true that you can see most of it from the street and paying for entry does not really offer any benefits. You can get a bit closer to the ruins and read a little bit of information about them that is scattered around the site. Like with the other ancient sites there is no extensive explanations for anything though and so it will probably only take you 15 to 30 minutes to go around. 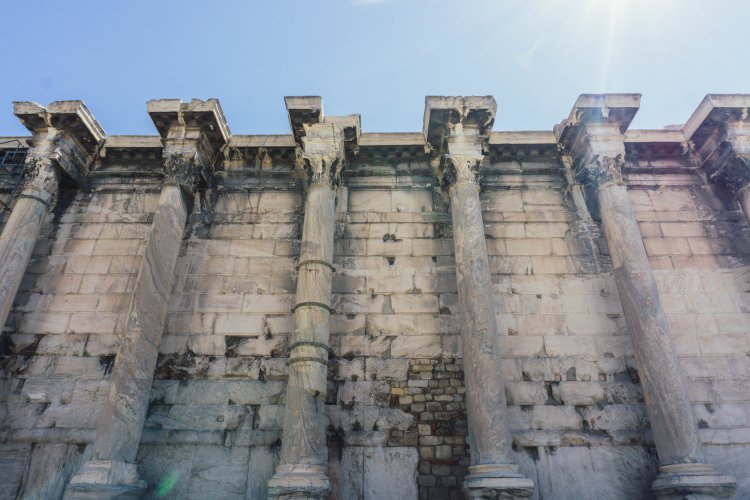 What I liked about Hadrian’s Library though is that it is something a little different to the Ancient Agora, Temple of Zeus and Parthenon. It is a very important site in the cultural history of Greece and also offers a little glimpse into the Roman emperor Hadrian and his role in Greece. You might also want to visit the Roman Agora if you are interested in this site, although I did not include it on this list as I preferred the Greek one.

The highlights of the site include the West Wall, which is the most impressive remaining building. There is also currently (in 2018) an area of the site being excavated, which allows you to see archaeology in action! 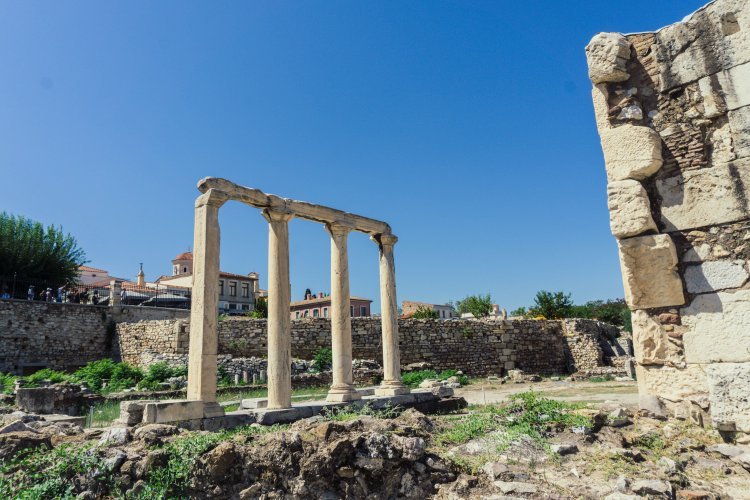 This was without a doubt one of the best ancient sites I visited in Athens. It stands out for a couple of reasons. Firstly, it is incredibly well-preserved. With many of the remaining buildings and sites from ancient Greece you need to use a fair bit of imagination to get a sense of how they once were. The Panathenaic Stadium looks pretty much exactly as it has always been!

Tip: The Panathenic Stadium is the only stadium in the world built entirely from marble. It looks amazing but it also gets really hot! Make sure you time your visit at the beginning or end of the day so it is not too hot for you to sit down and soak up the atmosphere. 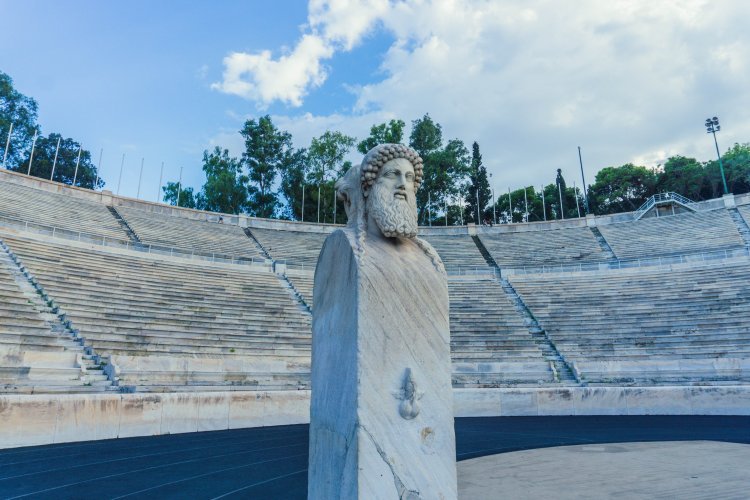 It also gives you the chance to see something a little bit different. Don’t get me wrong the ancient Greek temples and buildings are incredible but being on the site of an ancient arena has a different feel. Not only can you walk around the seating area but also on the arena floor and down the tunnel where the athletes would have entered the stadium. I found all of this quite thrilling as this is pretty much the closest I will ever be to experiencing what it would be like to be in the center of an arena.

There is a small museum located in what would have presumably once been the backstage area for the athletes. If you are interested in the history of the Olympics then it’s worth a look. They have the poster designs and torches from all of the Olympic Games on display! 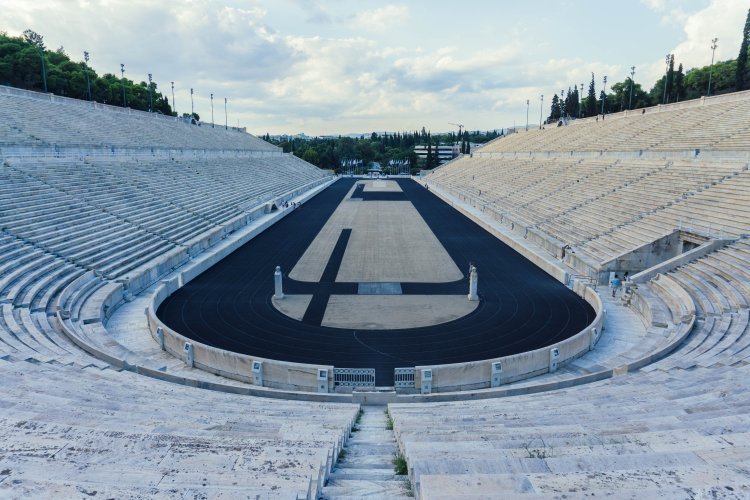 Tickets – how, when and where to buy 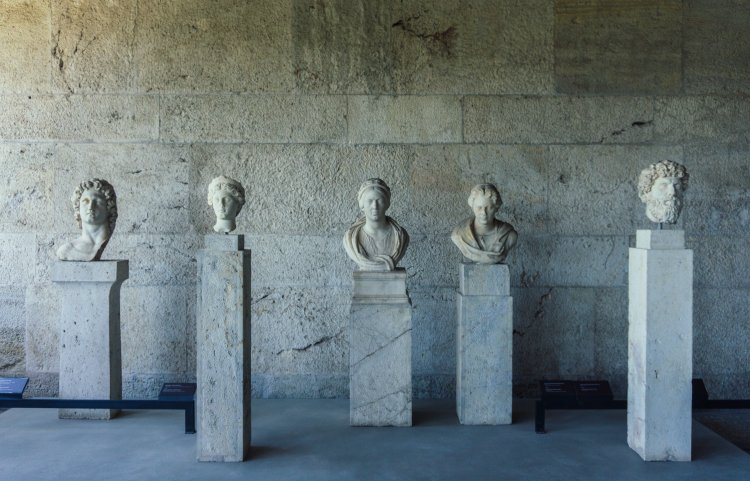 The entrance fees for each location are relatively inexpensive. All cost between €5-10 apart from the Acropolis, which is €20. The best thing to do is work out exactly which ancient sites you want to visit from the above list and how much it would cost you to enter them individually. If you are planning to go to the Acropolis and at least 2 other sites it is worth getting the combination ticket to save money.

The only site on this list which you need to buy a separate ticket for is the Panatheaic Stadium, which has an entry price of €5.00. Of course, I think it is well worth the additional cost or it wouldn’t be on this list! 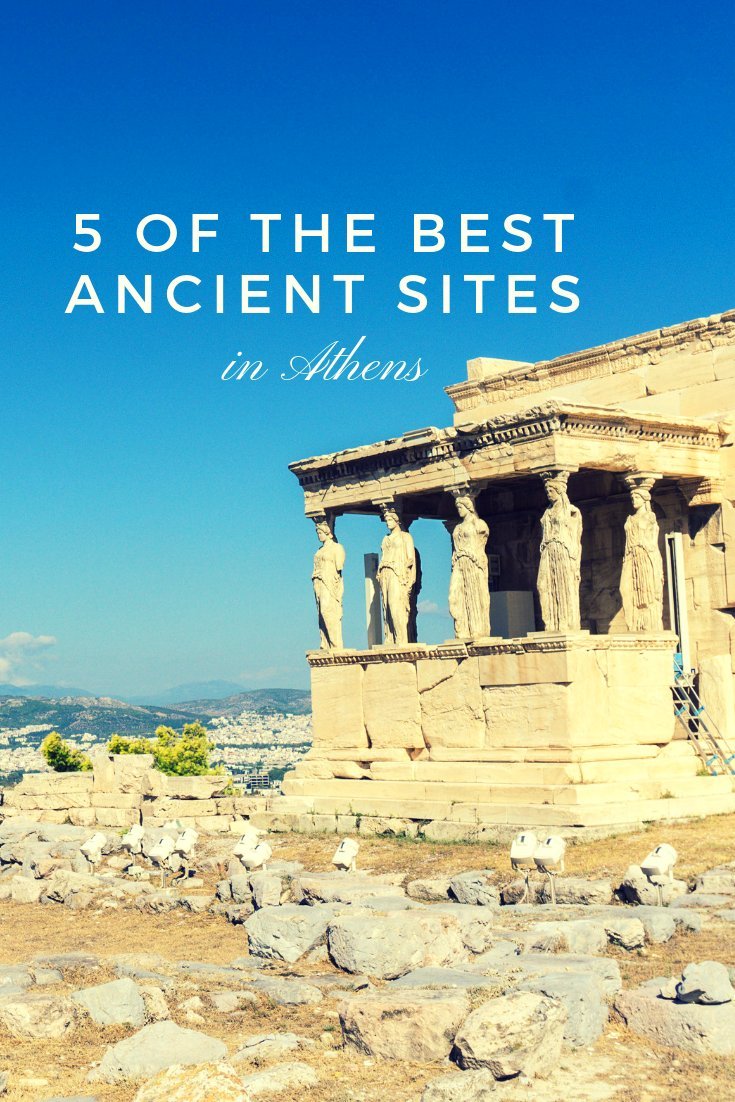 Athens is on my bucketlist and your photos have made me want to go more than ever. I love history and archaeology and the buildings in Athens are amazing

You won’t be disappointed! Athens was on my bucketlist for a long time too and I honestly thought it couldn’t live up to my expectations but it was such a wonderful city – I really loved it. There is something amazing on every corner!

Your trips and writing are so beautiful! I’m inspired. ❤️

Thank you so much Cheryl, what a lovely comment ❤️