Before starting my Balkans trip I knew that while travelling through mainland Greece I wanted to visit the famous monasteries at Meteora. I initially planned to travel there on my way from Delphi to Thessaloniki but when I looked into public transport options it was trickier than I had anticipated. In this sort of situation I am not adverse to taking a tour and after looking at a few different ones I settled on Ammon Express’ Meteora day trip from Thessaloniki. 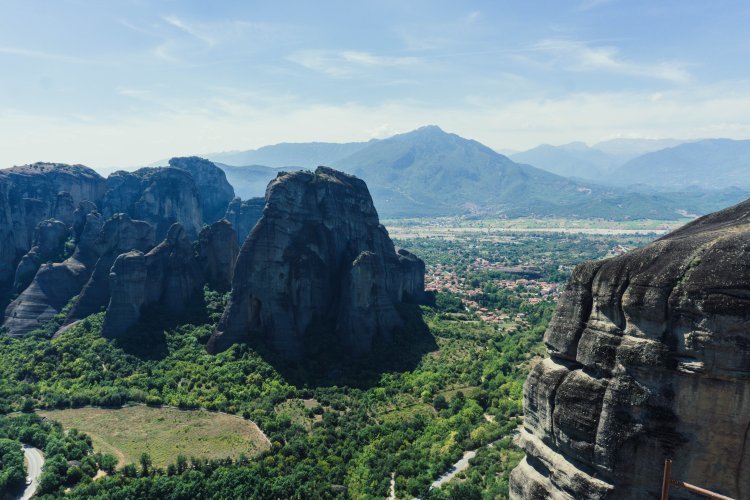 Travelling from Athens or Thessaloniki?

You can book a Meteora day trip from Athens and Thessaloniki and it is around the same travel time for both. I only ended up going from Thessaloniki because I had an extra day there that I was happy to give up to take the trip.

Our Meteora day trip began from Thessaloniki. There are a variety of different pick-up points that you can choose from when you book the tour. Some of them are even a little way out of the city centre, which was great for me because my airbnb was by the train station (about 20 mins walk from the centre). Luckily I was picked up last and dropped off first, especially considering that there is a 3 hour drive each way to Meteora!

On every tour you visit 2 of the monasteries. I believe there are 6 still in operation today out of the original 24 and whichever 2 you visit will depend on the tour and the day. To be honest I doubt anyone really goes on the trip with a preference, they all offer the same spectacular views! 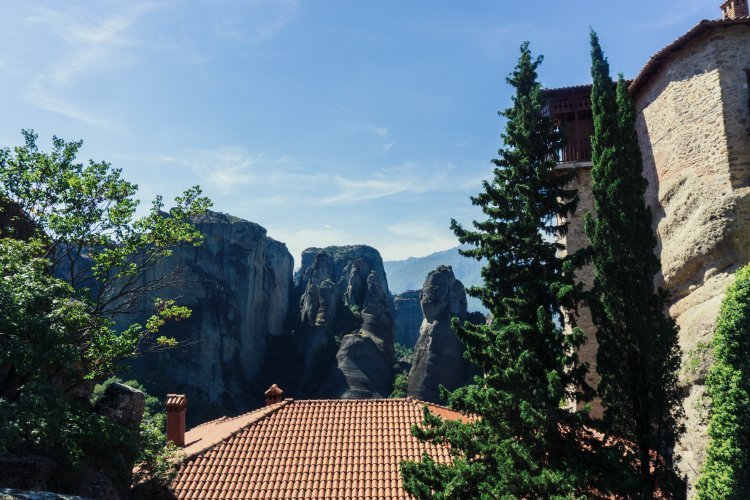 First up we visited Roussanou Monastery. It is thought to have been named after the first hermit to come and live on the rock. The cathedral building was built at the end of the 16th Century, which makes it one of the later monasteries of Meteora (some date from 14th C). In 1988 the monastery became a convent and still operates as such with all-female residents.

On arriving at Roussanou the sheer amount of tourists was the first thing to hit me. The monastery is very tiny and has a narrow staircase leading up to the top and through the entrance, which created a huge queue! Even once inside there was barely any space and especially in the chapel. As with all of the chapels in the monasteries of Greece it is stunningly decorated inside (photos are forbidden) and the little terrace area where you can look out at the surrounding area is gorgeous. 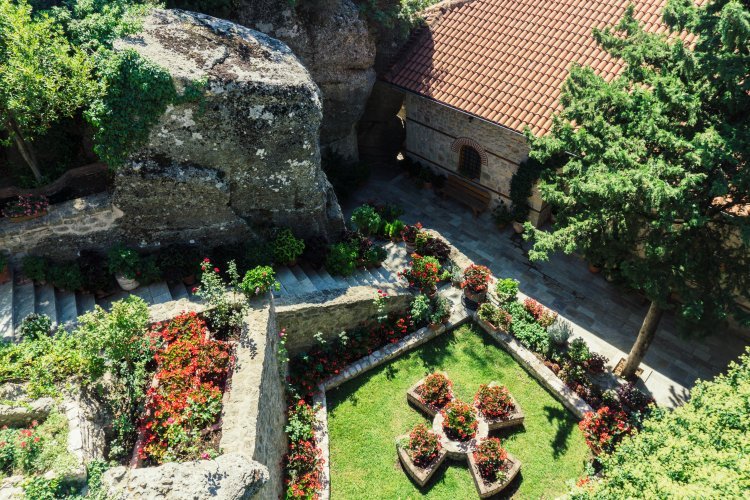 We were allocated 45 minutes to explore but really you could look around easily in 20. I do think the extra time is given to allow for queuing and the slow pace you are forced to take with all of the people once inside because it’s a couple of rooms only. I might have liked to spend longer looking around the chapel but it was impossible to move in there and so it was more of a quick glance-and-go moment!

From here we took a short drive to the next stop, which was Varlaam Monastery. This was honestly a much more pleasant experience as there is a lot more space and so the amount of people was less overwhelming. Varlaam is actually the second largest of the remaining monasteries and is an all-male residence. One really good thing about the Ammon Express Meteora day trip was that I felt like I really got to see two very different monasteries. 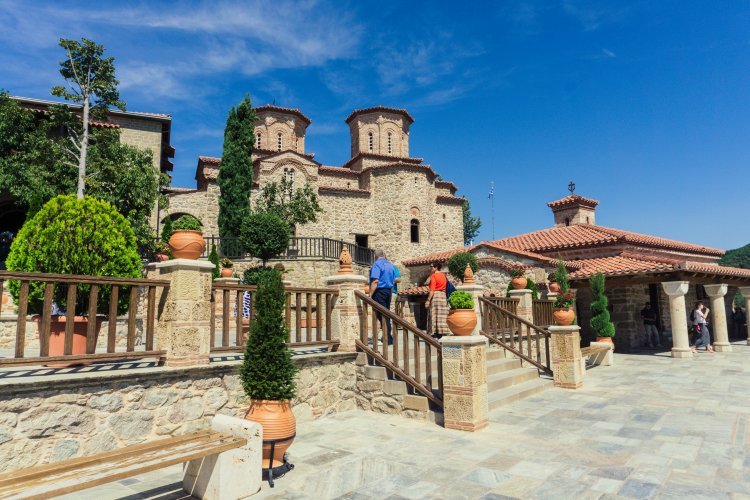 Unlike Roussanou, Varlaam has lots to see! The old refectory is converted to a museum which houses many beautiful painted religious icons. There is also a kitchen and hospital as well as the tower of the preserved net. These nets were used by the first monks to ascend and descend from the monasteries and also to transport supplies such as bread and water. It is absolutely incredible (and terrifying) to think that people used to actually go up and down in nets from these buildings, which are so high!

Unfortunately we were given the same amount of time to look around as we were the other monastery and so this one was a bit of a rush. Everyone on the tour agreed we could’ve spent less time at the first stop and more at the second and I’m not sure why this hasn’t been allocated more sensibly as Varlaam is clearly a lot larger. Maybe it is due to the fact that they change up the monasteries all of the time so it is easier to keep the same timings for the trip that tailor them to each itinerary. 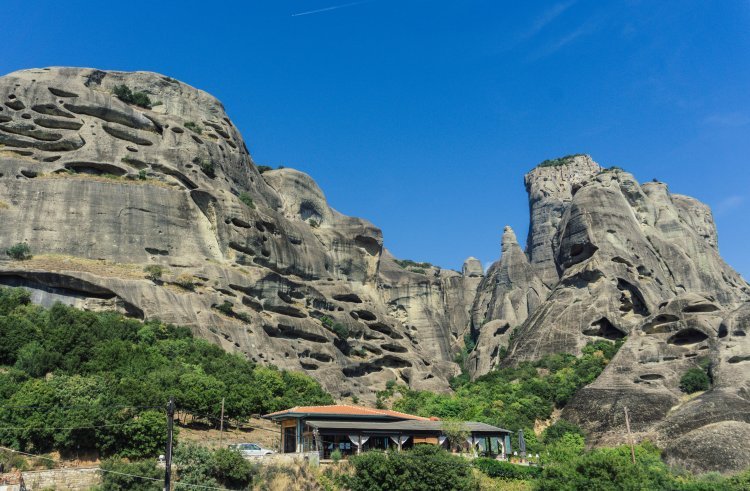 Is it worth it?

The monasteries at Meteora are something you HAVE to see. The landscape is just incredible and being there really gives you a sense of how hard and secluded the lives of the monks and nuns must have been before the monasteries were accessible by road.

However, the sheer amount of tourists can be quite off-putting. I didn’t even go in the high season and you couldn’t move for people!  Bus loads of people visit these tiny places every single day and it definitely but a dampener on the whole experience for me of what would otherwise have been an enjoyable day.

The amount of travel time involved if you’re taking a Meteora day trip from Thessaloniki or Athens is also something you should consider before booking. I spent many hours on buses throughout this trip and it is not something that generally bothers me but even I felt a bit frustrated! If you’re brave enough to face Greece’s public transport system or have another way of getting there en route to somewhere else I would highly recommend it over taking a day tour. That way you might also be able to visit the monasteries once all of the bus tours have left for the day! 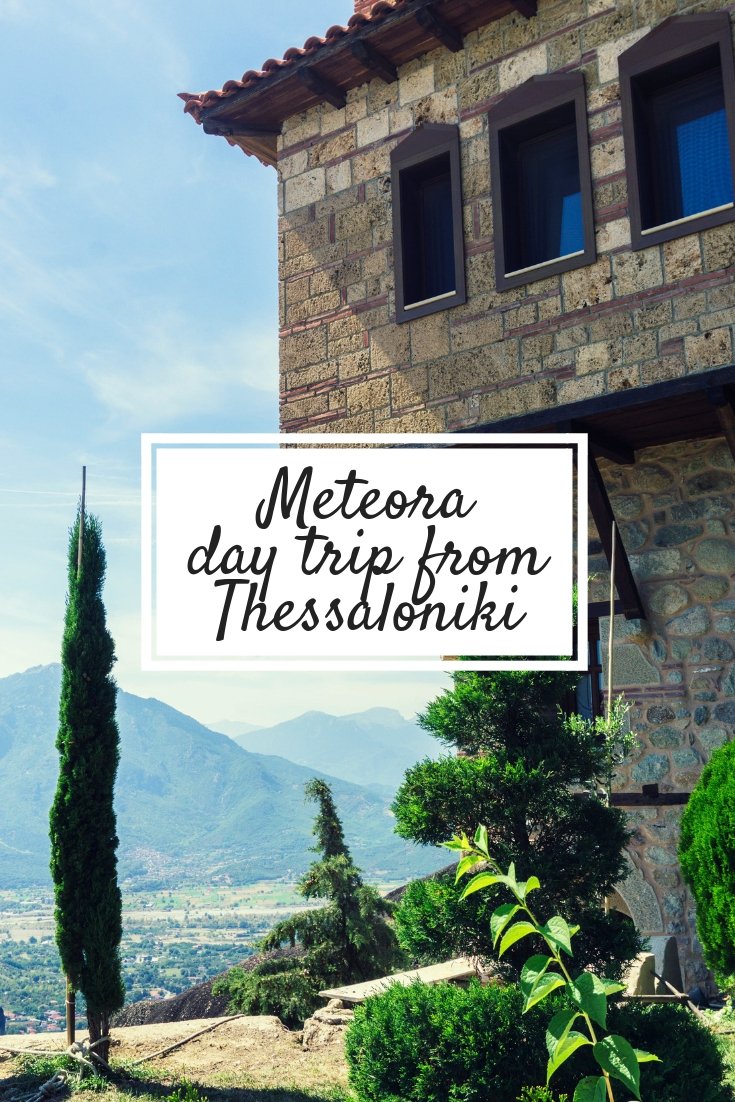 Absolutely loved this area Kat- fortunately we were travelling in our camper van so could take our time and easily get between monasteries. Totally agree that the landscape is stunning and you really do get a sense of the harsh life before the roads were built that’s for sure!

It sounds like you absolutely did it the best way!