Home Europe 6 reasons Bosnia and Herzegovina is worth visiting
Europe

Of course, when you get back from a trip where you’ve been to 6 countries and 10 cities in a month, people inevitably want to know which place was your favourite. Sometimes it’s hard to choose, e.g. I always struggle when people ask this about Australia because there are so many places I loved for different reasons. However, when it came to answering this about my Balkans trip it was easy and obvious. My favourite country was Bosnia & Herzegovina. This answer surprised a lot of people, who obviously expected the more obvious Croatia or Montenegro to be my choice. What can I say? I loved Bosnia and Herzegovina and these are just a few of the reasons why. 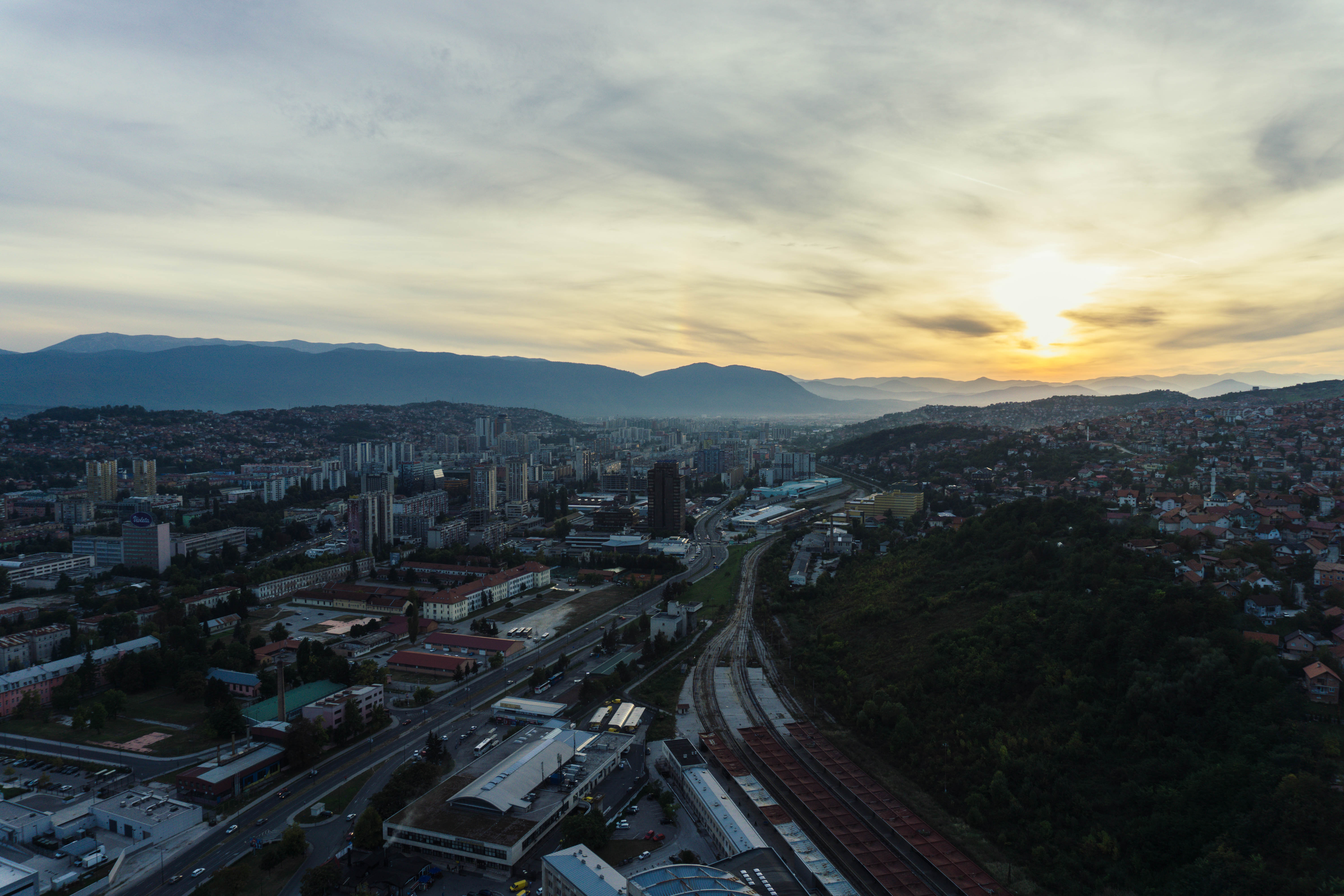 I had no idea that Bosnia and Herzegovina was so beautiful. The capital of Sarajevo sits nestled in the valley of Bosnia, and is surrounded by the Dinaric Alps. What’s extra wonderful is that because the city isn’t hugely built up you can wander around and see the mountains all around you. It’s also easy to walk up some of the smaller hills for an amazing view of the city and surrounding landscape. Mostar also sits in a valley; the deep valley of the Neretva River, and the mountains are much closer on either side. 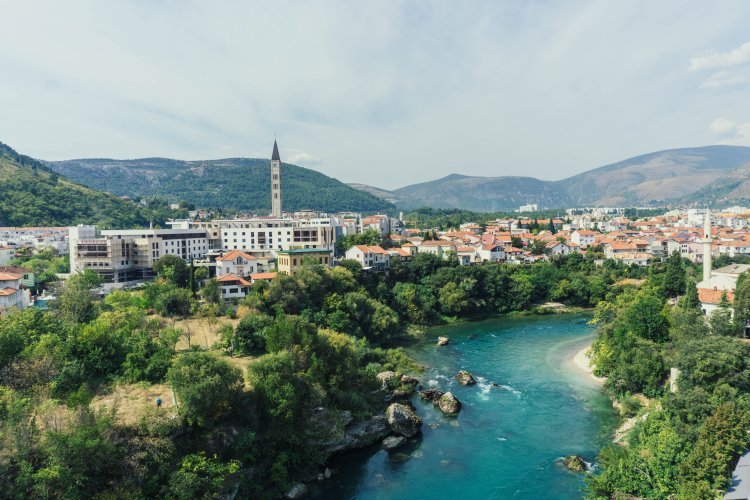 It is during the bus journey that I took between Sarajevo and Mostar that I was really bowled over by Bosnia and Herzegovina’s incredible landscape. Travelling through the mountainous countryside with the bluest lakes and rivers, it reminded me of the Norweigan fjords or parts of New Zealand!

The Bosnian people are some of the loveliest people I met on my trip. The local restaurant owners and shopkeepers in both Sarajevo and Mostar were so friendly and, generally, the people of Bosnia & Herzegovina are happy to have tourists around. As I’m sure you’ll agree, it’s nice to actually go somewhere and be made to feel welcome. You’ll probably feel this especially if you travel to Mostar from the tourist-overloaded Croatia, which many people do. 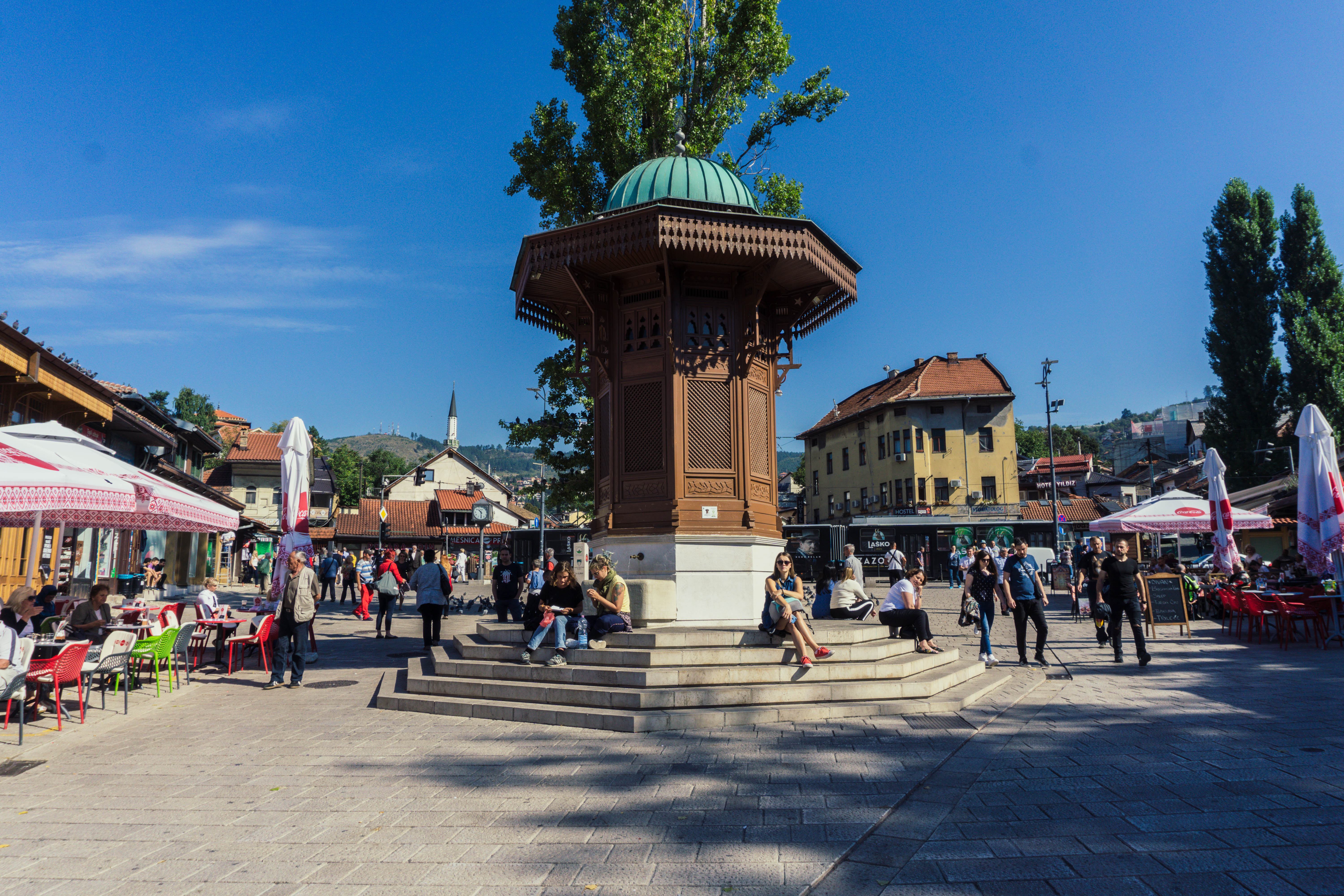 Both where I stayed in Sarajevo, and particularly in Mostar the staff could not have been friendlier. At Guesthouse Villa Globus, when I arrived the owner gave me a full explanation of where everything was, pointed out some recommendations for what to do in the time I had there, and recommended several restaurants to try. I did try them and can confirm that they were solid recommendations!

Of course one of the things you will first notice on arrive in both Sarajevo and Mostar are the remnants of the war. The Bosnian war took place between 1992 and 1995, so many of the scars are still visible in the burnt out buildings and bullet holes that scatter the streets. As this history is so recent, it does mean that many of the people living there today lived through it and have personal stories to share. I would recommend taking a walking tour around the cities to get a real understanding of the Bosnian war. Although the tours seem to often by run by guys and girls in their 20’s, they have first-hand stories to share from their parents and friends that will give you a unique insight into what it was like to live through. 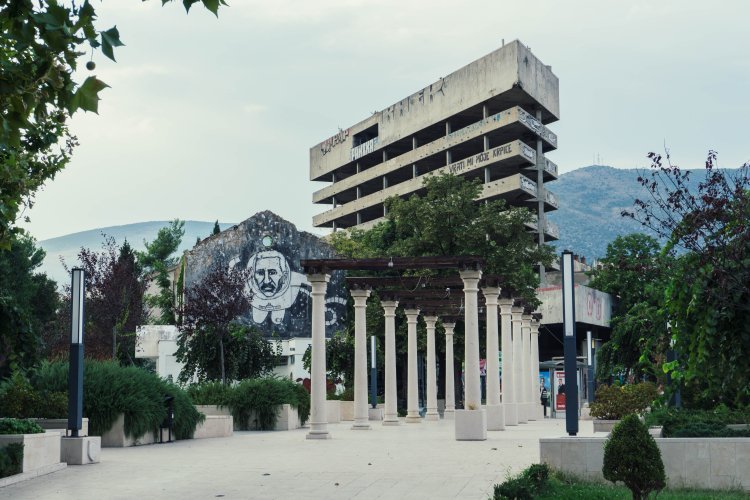 As well as the spoils of war that lie in the backstreet buildings, there are also many official historical sites that are worth visiting. There are a few war museums in Sarajevo but for a slightly different slant I would recommend visiting the Tunnel of Hope, which is out of the city near Sarajevo airport. When the city was under siege between 1993 and 1996, the tunnel was the only connection between Sarajevo and the outside world, and the source of all of the food, medicine and other supplies into the city. 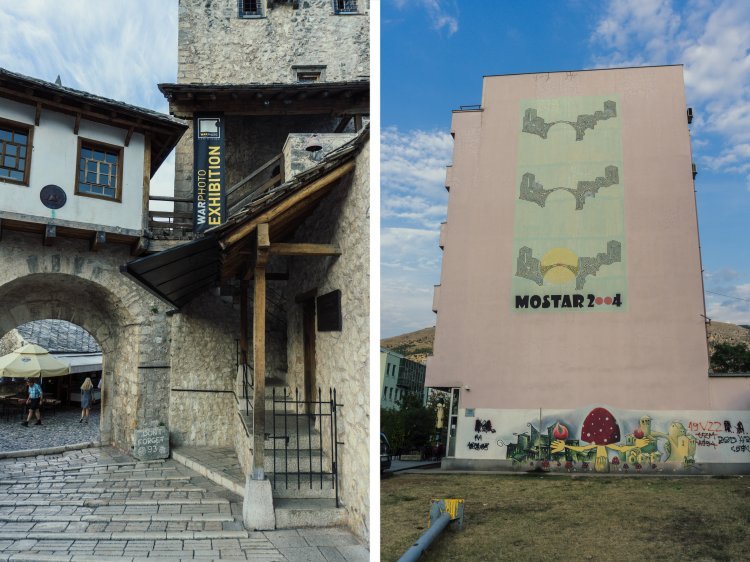 In Mostar, the War Photo Exhibition, on display in the Western Tower of Stari Most bridge, is what I would recommend. The collection of photographs by New Zealand photojournalist, Wade Goddard, give you a real sense of what the war was like.

The architecture in the cities of Bosnia & Herzegovina is varied and fascinating. Mostar is a city still somewhat divided, with Bosniak Muslims mostly living on one side and Christian Croats on the other side. You can see this in the way that the buildings differ on the opposite sides of the river. What connects them is Mostar’s most iconic structure and the big tourist draw – Stari Most. Destroyed in 1993 during the conflict, the bridge was rebuilt in 2004 and is seen as a symbol of reconciliation, reuniting the two sides after the war. 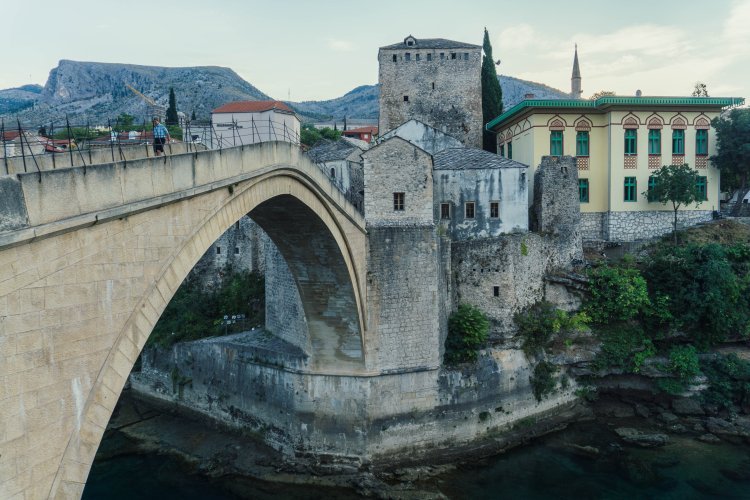 One of the reasons I found Sarajevo so fascinating was due to the fact that it’s almost like two cities in one because of it’s architecture and culture. There is a point in the middle of the city where there is a marker with an arrow pointing east and one pointing west. If you stand at this point and look one way the city looks like you are in Eastern Europe and there is a heavily Turkish influence, if you look the other way it is like you are in Western Europe and it looks like you could be in Vienna.  Unlike Mostar there is no physical thing to divide the two halves and it’s actually pretty incredible to have these two ‘sides’ of the city pushed up against one another but completely harmonious. 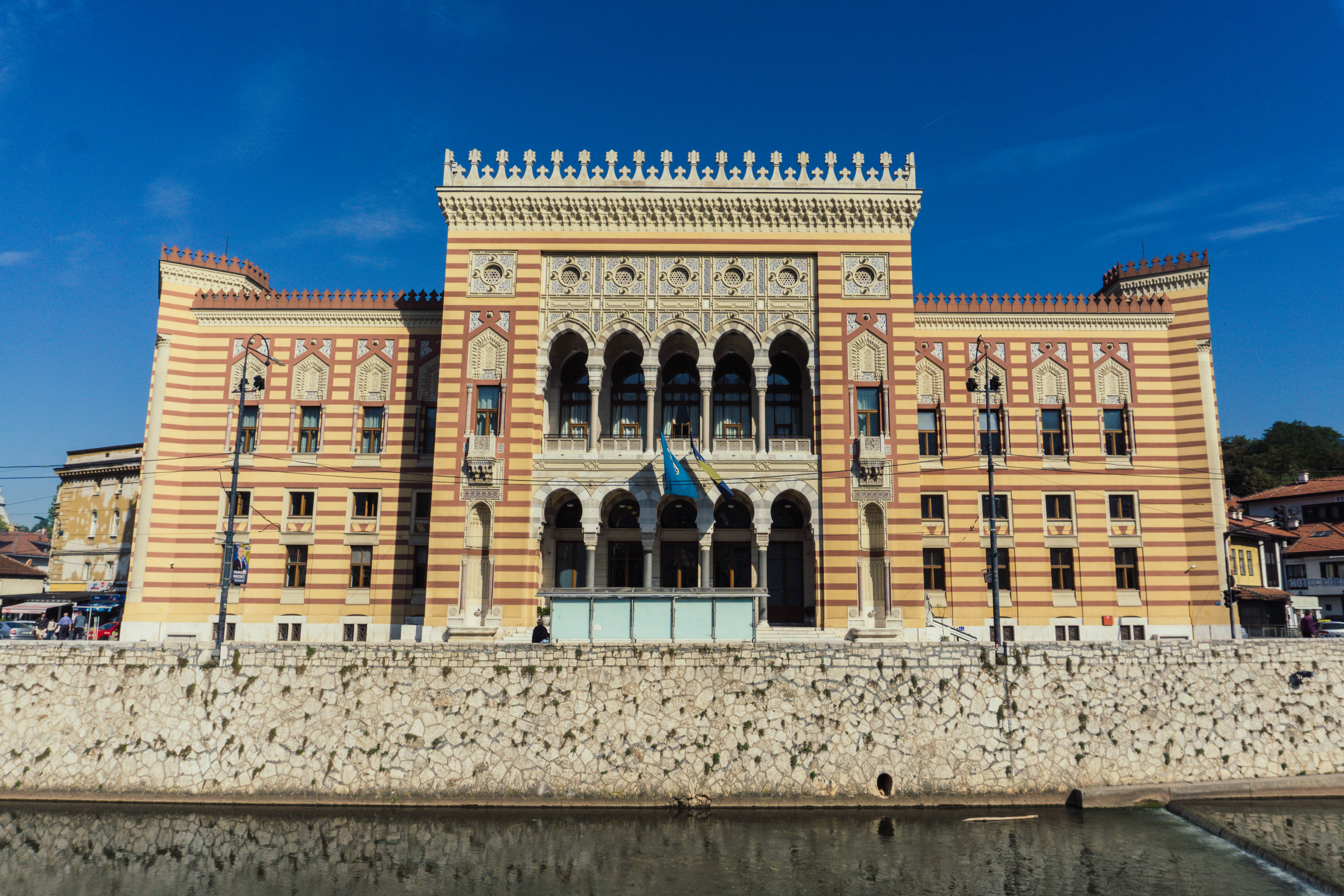 ‘When is Bosnia, you must try cevapi’, the guide on our walking tour of Sarajevo told us… and I’m so glad he did. Cevapi is kind of the Bosnian version of a Greek gyros. It is meat, usually a minced beef, formed into a sausage shape, and served with flatbread and chopped onions. Traditionally, it should be served with a sour yogurt-type drink, but I admit that I passed on that. It’s really cheap and it tastes so good.

If you want to sample all of the local flavours then Bosnian coffee is also a must. Similar to Turkish coffee, it is incredibly strong, and served rahat lokrum (Turkish delight) and sometimes a glass of cold water to help it down. There is also a whole art to the way it is served, which is quite complicated, so I’d recommend asking the staff to explain for you to avoid any embarrassment in front of the locals. 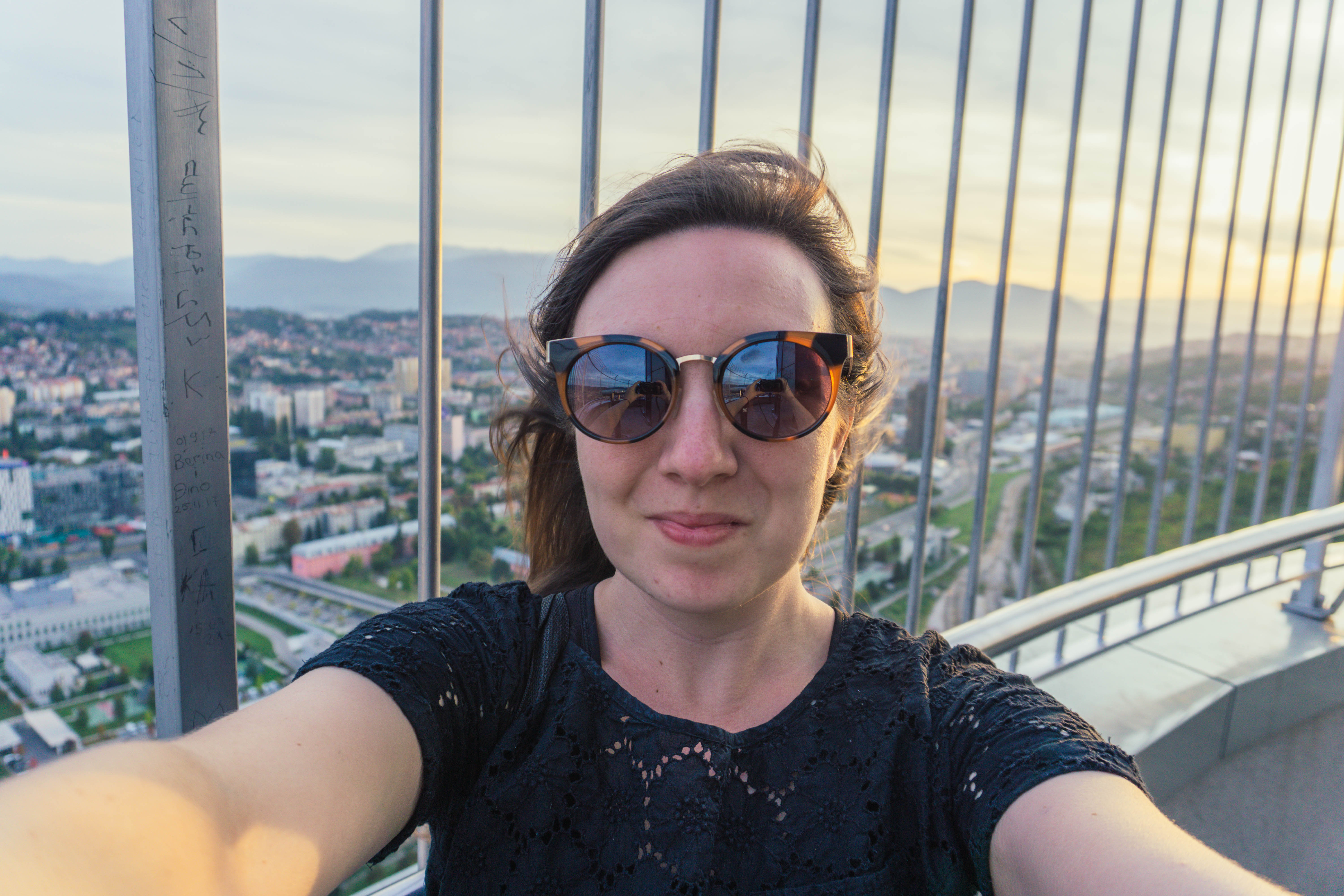 I didn’t have any real expectations about what to expect from Bosnia and Herzegovina but, in all honestly, it was the country I was most nervous about travelling to solo. I think it was probably other people’s reactions that gave me the nerves because there’s still a lingering image that most people have of the war when you mention Bosnia. Within 5 minutes of arriving and being greeted by my lovely hostel owner in Sarajevo I knew everything would be fine. The truth is that Bosnia & Herzegovina is completely safe to visit. I actually never once felt uncomfortable or worried about my safety walking around either Sarajevo or Mostar as a woman alone, which is more than I can say for some other more frequented and popular tourist destinations.

Bosnia and Herzegovina is a country I can see myself going back to time and time again. I was very keen to go back to Sarajevo as soon as I could and quite disappointed to discover there are no direct flights from London! Come on airlines, with Mostar becoming increasingly popular with tourists, surely it makes sense to start flying to the Bosnian capital now? 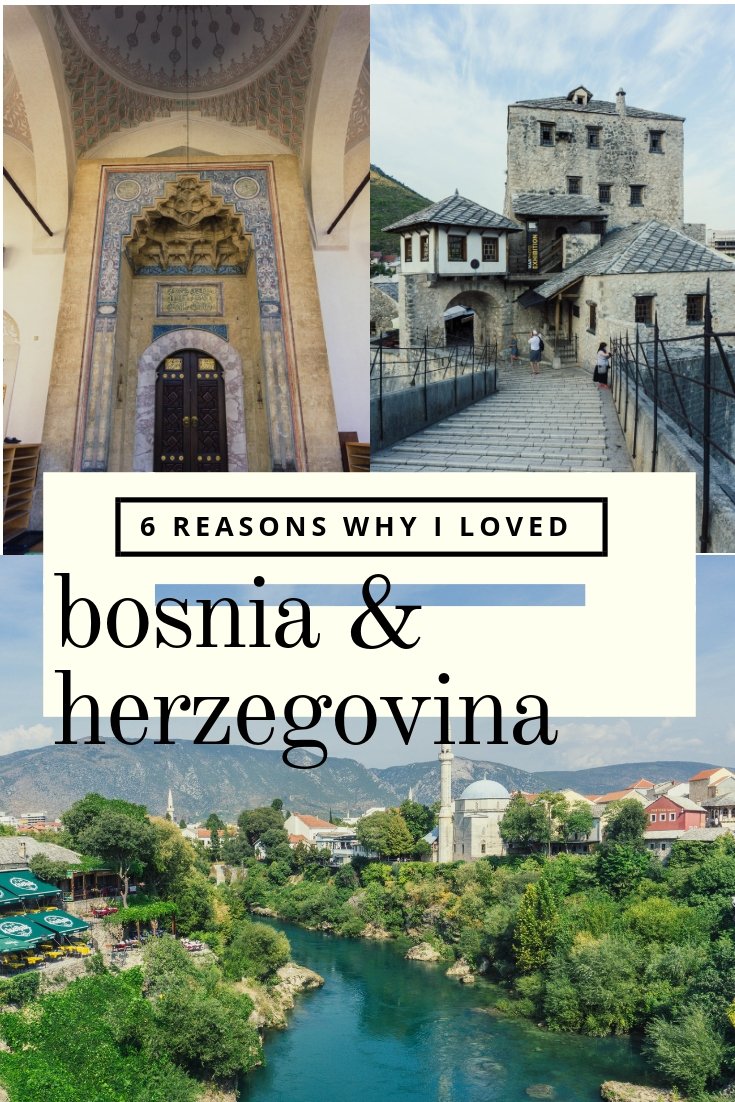 Mostar travel guide: things to do, what to eat & where to stay

Yes!! I absolutely loved Bosnia too. I really enjoyed Montenegro and I feel like it could top Bosnia if I spent more time there, but based on my experiences on my trip, I think Bosnia is probably my favourite too! The scenery was so unexpected.

It’s such a beautiful country – I couldn’t believe how stunning the scenery was! So underrated.

Montenegro is also beautiful but I only visited Kotor (and Perast briefly) so I found it a little bit too touristy. I’m sure if you go to the less popular areas it’s a better experience though!

I think Kotor suffers from cruise ship tourism, so it probably depends on the day. I was quite lucky when I went because there was only one small cruise ship in (same in Dubrovnik). I feel like it made all the difference! Plus it’s sooo beautiful.

Very true! Dubrovnik was also super busy when I went but both are beautiful places!