Home Europe Mostar travel guide: things to do, what to eat & where to stay
Europe

Mostar travel guide: things to do, what to eat & where to stay

When it comes to Bosnia & Herzegovina the city on most people’s bucket list isn’t the capital of Sarajevo (one of my favourite cities), but it’s quaint little southerly sister, Mostar. When you see Mostar it’s easy to see why. The cobbled streets, and quirky restaurants give it a much cosier small-town vibe, which is juxtaposed by the magnificently imposing Stari Most bridge. If you’re thinking of visiting Mostar, this is my guide to the things you should do, as well as some excellent restaurants and a recommendation for accommodation that is like a home-away-from-home!

Things to do in Mostar

I always love a free walking tour but when you visit places with lots of history that you don’t have a great knowledge of then it’s even more worth it to have someone explain it to you. A walking tour in Mostar is a worthwhile experience, not only for that, but also because so much of the history is recent that the guides often have first or second-hand experience that they will share with you. These stories are invaluable. 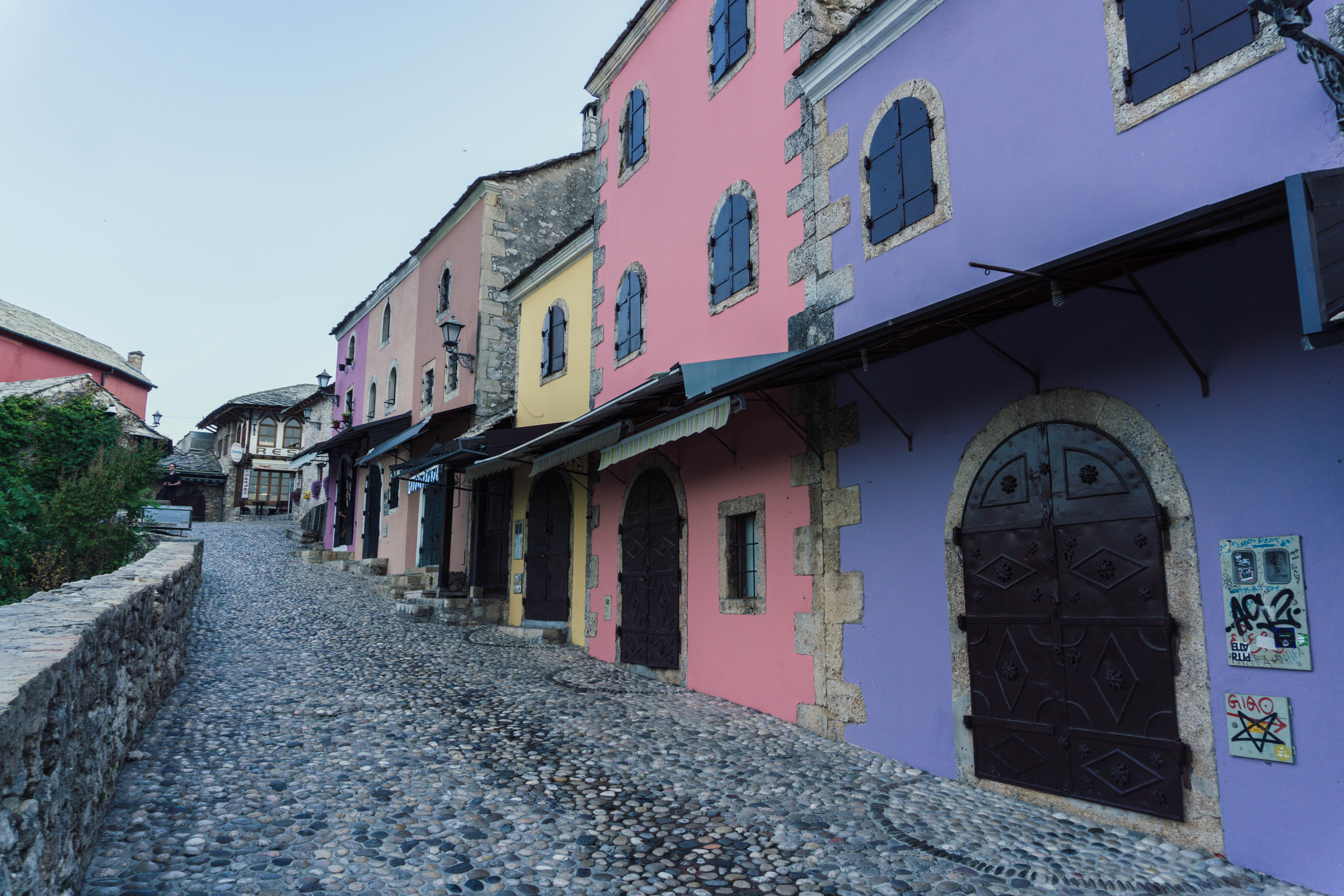 I took the Mostar Free Walking Tour, which runs every day at 10.00am and 6.00pm for 1.5 hours. They operate in many cities around the world and for all of their tours there is no set price, you simply pay the guide what you think the tour was worth at the end.

There are a number of mosques in Mostar and this is the only one I visited so I can’t compare it to the others, but I was bowled over by how beautiful it was inside. 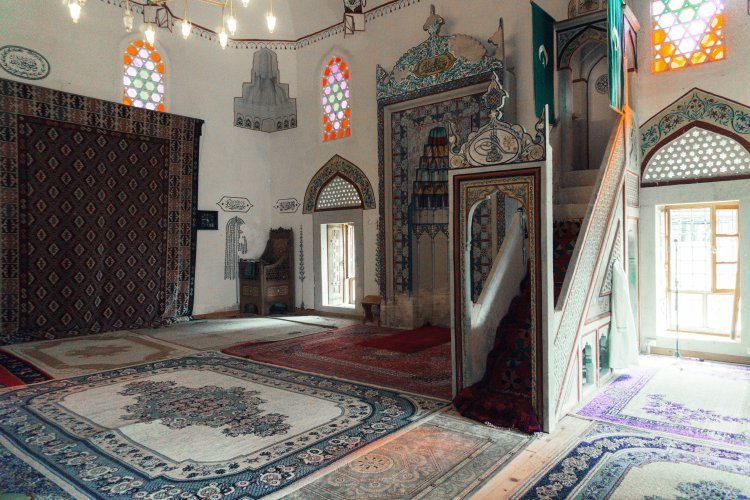 The main reason I visited the mosque was to climb the minaret, which gives you a stunning view of the city, the stari most bridge and across the valley. It isn’t for the feint of heart though. The minaret is nearly 35 metres high and the only way to get up it is via a very narrow winding stone staircase. The staircase is only slightly wider than the average human and there’s only one way to come up and down, which means if you meet someone coming the other way you both have to squeeze flat against the walls and hope for the best. Quite the experience, but definitely worth it!

As crazy as it may sound there are actually people who jump off Stari Most bridge. The tradition is centuries old but has become much more about the tourists these days, with the divers often standing on the edge waiting to collect a certain amount of money from tourists before they’ll take the plunge. Some of them stand there for so long they make you think the whole thing might actually be a scam, but I can assure you I did see at least one guy actually jump while I was there! 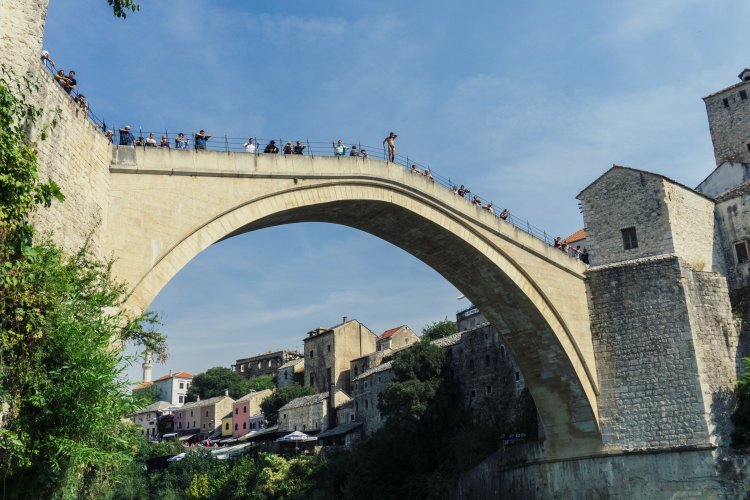 There is an annual bridge jumping competition in July every year which people travel for internationally. Plus, in some places on the internet they say you can pay the bridge divers to teach you to do the jump yourself – they do not recommend you try without training as people have seriously hurt themselves. When you’re actually there and see how high, I’m not sure why anyone would think it was a good idea, even with ‘professional’ advice!

There are a few museums in Mostar to visit if you want to learn more about the Bosnian War, including the Museum of War and Genocide Victims and the Herzegovina Museum, but there was one particular museum that piqued my interest. The War Photo Museum is quite easy to miss if you don’t know about it. It is marked by sign on the side of western tower of Stari Most but you have to go up the steps and inside the tower to find it. It is above the Bridge Diver’s Club, so a clue might be if you see lots of the divers running in and out of the building. 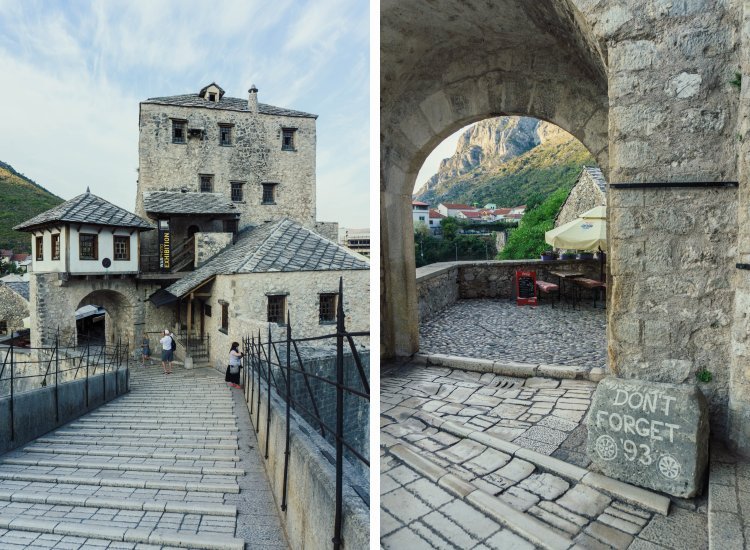 The name is perhaps misleading because it’s not so much a museum as an exhibition of one photographer’s work. The exhibition consists of around 50 black and white images captured by photojournalist Wade Goddard during the Bosnian War. They really give you a sense of what the war was like beyond any other museum I visited in Bosnia. It is unbelievable to see some of the places in the photos of the streets you have just been walking around.

Where to eat in Mostar

I’m pretty sure you can’t go far wrong with food in Mostar. When it comes to restaurants in destinations where there are lots of tourists, the ones in the main areas are usually ones to be avoided as they’re overpriced and overrated. In Mostar, this isn’t the case. I was recommended by the owner of my guesthouses to go to Sadravan, which is one of the most prominent restaurants in Mostar, located close to one side of the Stari Most. I soon discovered that the recommendation was probably solid when I was unable to get a table there on either of the evenings I was there! So while I can’t personally recommend it, I’d say it’s a safe bet, just make sure you book in advance! 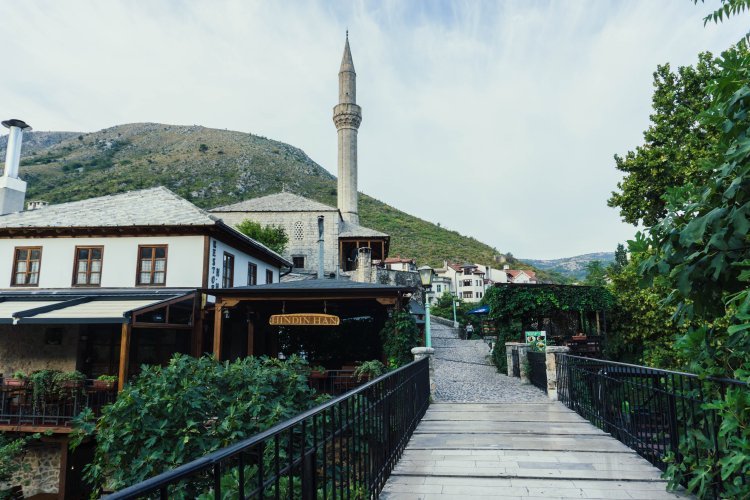 Luckily, I was able to find a table relatively easily at the other place he recommended, Hindin Han. Not only was the food amazing, but the location in this area of town is unrivalled. If the weather’s nice enough definitely choose to sit outside on the little verandas overlooking the river. Similarly good Bosnian food can be found at the nearby, Divan – they also had a sweet little cat wandering around when I was there, although I don’t know if this actually belonged to the restaurant. Many of them hang around waiting for food scraps – and subsequently look quite well-fed!

Where to stay in Mostar

During this backpacking trip around the Balkans, I stayed in a mix of Airbnbs and private rooms in hostels, but Mostar was the only place where I booked a guesthouse – Villa Globus. 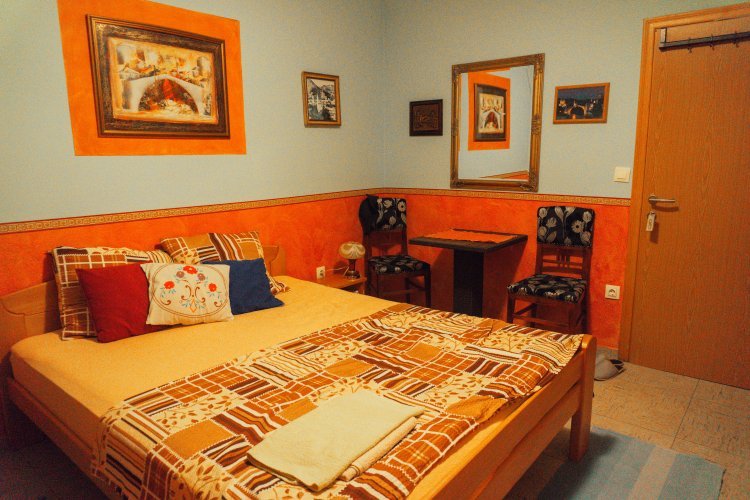 This place is so cute!  It’s more like staying in a local house than a hotel or hostel, with your own key to the front door (which is always locked) and access to a little kitchen with tea-making facilities. The house is really homely and decorated like a cosy Bosnian home. The owner is always absolutely lovely and happy to give you an introduction to Mostar and guidance about what to do depending on the time you have, as well as advice about where is good to get yummy Bosnian food (see above!)

Is Mostar worth visiting?

Visiting Bosnia from the UK can be a little tricky because there are no direct flights. This means that much of the country is still devoid of the hoardes of British tourists that descend on other parts of Europe. The exception to this is Mostar, which can be visited on a day trip from Dubrovnik, and subsequently is, by coachloads of people every day.

Mostar is interesting because it’s a very contained little city with just a few main streets on either side of the iconic Stari Most bridge, and during the day it’s packed with tourists. That’s not to say it’s not worth a visit though, it’s just something to be aware of, especially if you go in the height of season. I visited in September (not the height of season) and this is how Stari Most looked during the day… 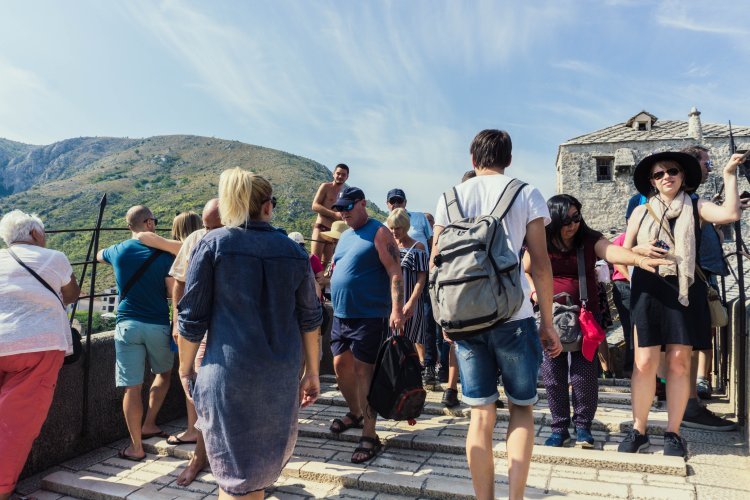 Many of my photos in this blog post came from me getting up at 7am one morning to walk around the streets before the coaches arrived. It’s a different experience entirely. The city is very beautiful regardless, and worth visiting but if you can stay overnight or for a couple of days and get to see without all the tourists you’ll see the best side of it. 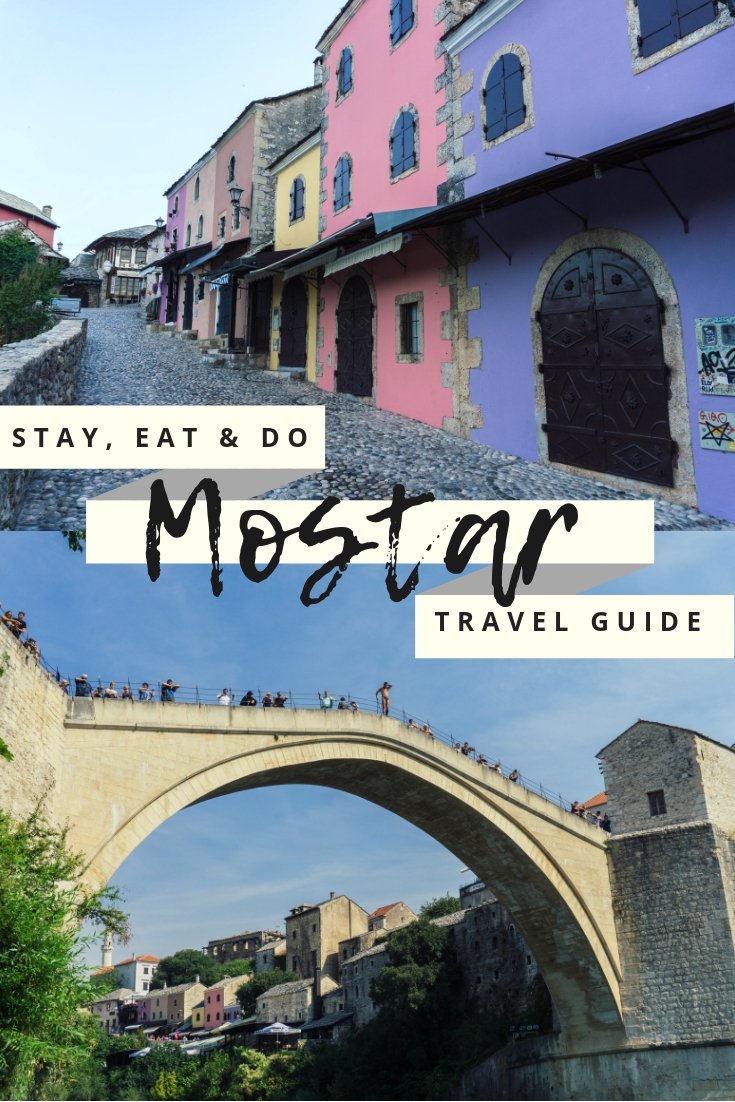