10 things to do during your city break to Valencia

Two weeks ago I spent a scorching weekend in Spain’s third largest city – Valencia. With the exception of a few things we wanted to see, we hadn’t planned much of an itinerary for our trip, which turned out great. We spent three relaxed days wandering around the city, eating and drinking lots and soaking up the atmosphere. The biggest and best surprise was that there is actually a surprising amount to do in the city! Although I could go back and see more, here are ten essential things to do that are easy to squeeze into a Valencian city break without too much rushing around.

There are two food markets in Valencia you might like the visit. The Mercado de Colon is more of an ‘eating out’ market, full of cafes and restaurants, and with some delicatessen stalls; and the Mercado Central is a traditional food market. This is the place to go to mingle with the locals and get a real sense of the atmosphere of Valencian life. You won’t find much to eat on-the-go here as it’s mostly a shopping market for fresh produce but you can pick up a snack and also try one of Valencia’s famous local drinks – Horchata. It looks like milk but it’s actually made from tiger nuts and has a sweet, nutty flavour. It’s closest comparison for me is coconut milk/water, as it has an earthy aftertaste. 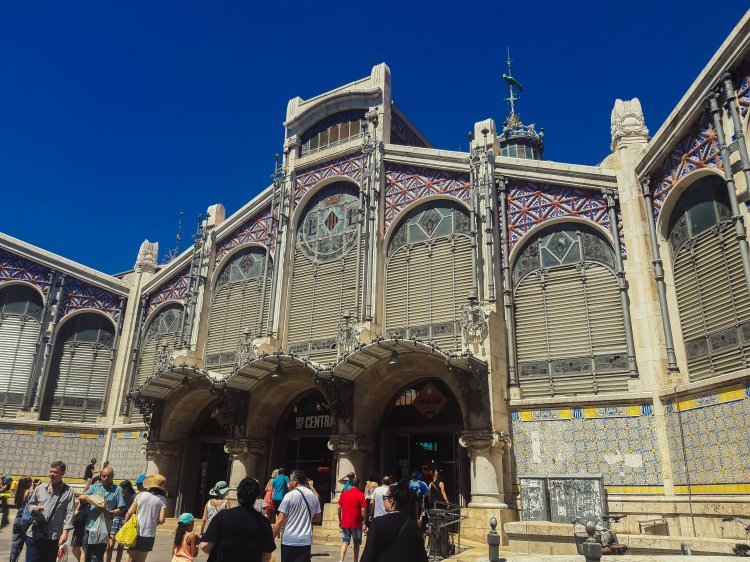 Travel back in time at the Silk Exchange

The Silk Exchange building is one of the most important symbols of Valencia. Although this is probably a 30 minute long activity and there’s no real information available about the historical or cultural significance of the building (but there’s always google!), this was still one of my favourite places in Valencia. The medieval interiors are simple but stunning – it feels as if you’ve walked on to the set of Game of Thrones – and the sheltered courtyard is very pretty. It is also the only place that I saw Valencian oranges actually growing trees! Combine all of these things with the fact that the entry was only $2.00, you can’t miss this off your list. 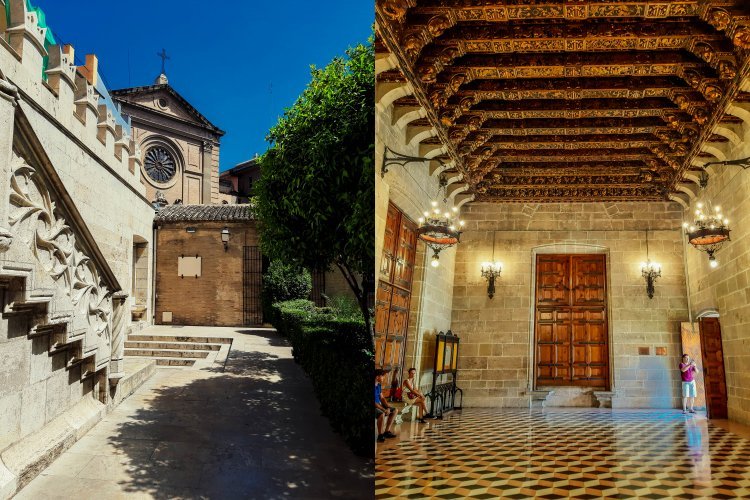 Marvel at the City of Arts and Sciences

I’ll be honest, one of the main reasons I wanted to visit Valencia was after seeing photographs of the incredible complex of buildings that make up the ‘City of Arts and Sciences’. This ultra-modern part of the city is about a 40 minute walk from old town part of the city. it’d be pleasant on a normal day, as you can walk through the winding river park (more on that later), but we took the bus because it was 41 degrees celsius! Being so hot it was a good day to enjoy the air-conditioned science museum, which is what we did (there was even a Harry Potter exhibition on!), but there’s also a huge aquarium, imax cinema and the palace of the arts if you prefer. Even if museums aren’t your thing it’s worth checking out this area just for the architecture – which is appropriately out of this world. 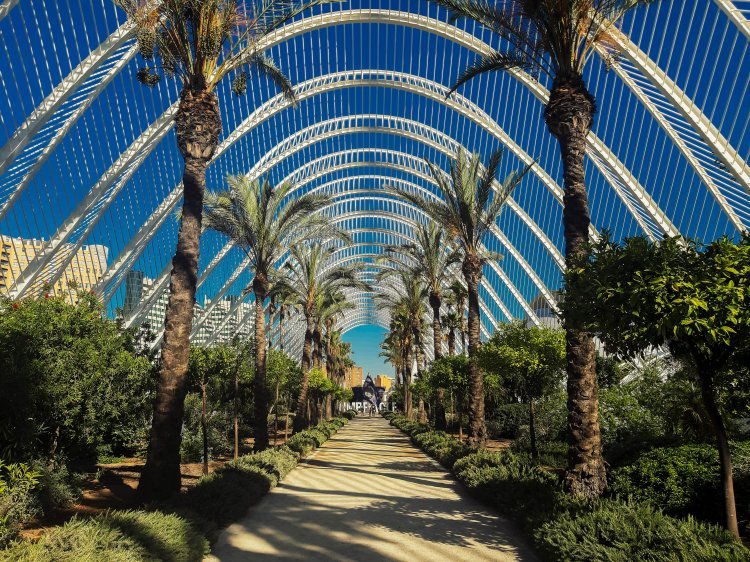 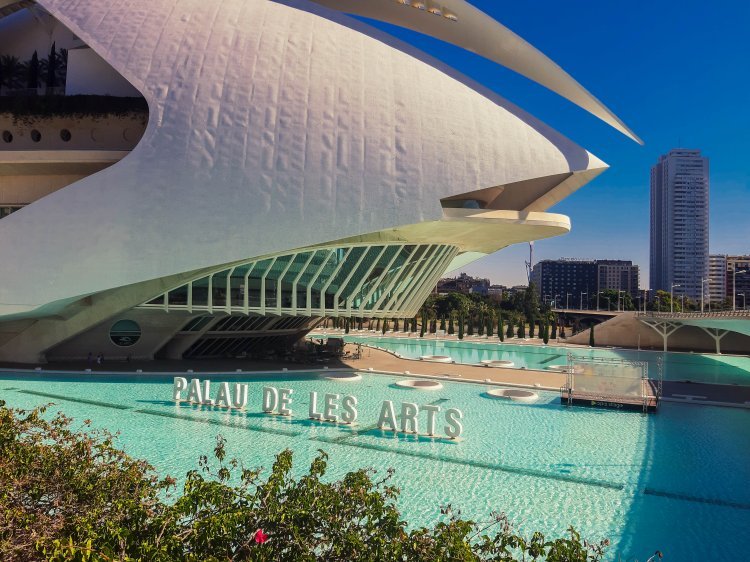 Another gem to be found in the river park is a huge children’s playground shaped as Gulliver from jonathan Swift’s famous novel. It’s really cleverly done, and best appreciated from above.  Sadly when we visited it was closed due to it being the middle of the day, and way too hot for anyone to be climbing on. 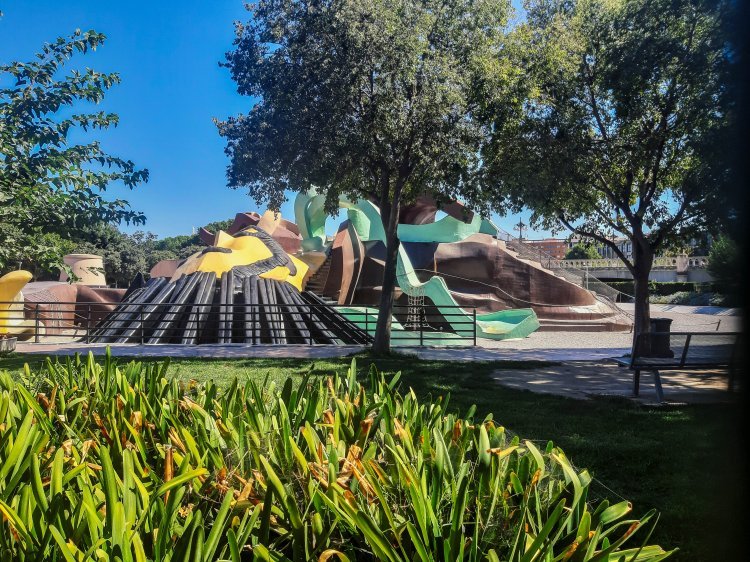 Visit the ‘Sistine Chapel of Valencia’

The Church of San Nicolas is an architectural highlight of the city. Thanks to its stunning vaulted painted ceilings it is affectionately referred to as Valencia’s Sistine Chapel. There are many churches in Valencia so if you’re strapped for time this is definitely the one to go to, however, if you have a few days you can purchase a combined ticket which grants you entry to San Nicholas, the Church of Santos Juanes (next to the Central Market) and the Silk Museum. For both churches you also get an audio guide which is very extensive and informative – the Santos Juanes one also provides some amusement as it is inexplicably narrated by the church. 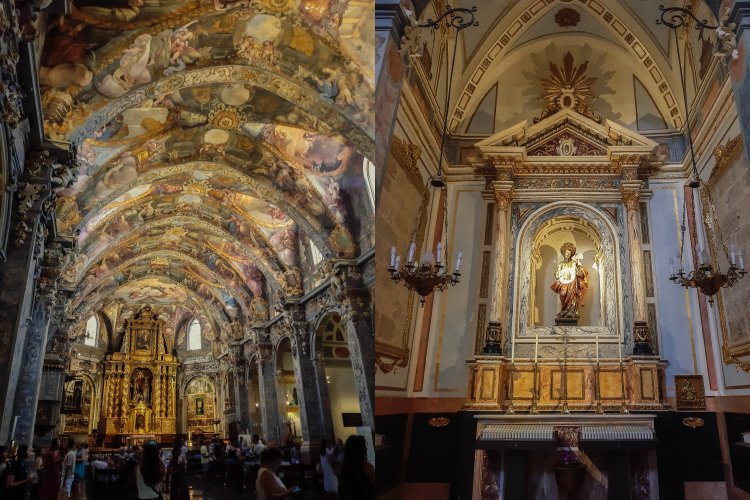 if you wander around the neighbourhood of El Carmen – which I absolutely recommend you do – you might stumble across Valencia’s tiniest house. The reason for the size? It was built for the stray feline residents of the city by a local artist. It was thought that the cats may have used it to pass through the wall but, as we discovered during our visit, it now appears to be blocked up. The whole thing is lovingly detailed though – there are even little people pictured in the windows. 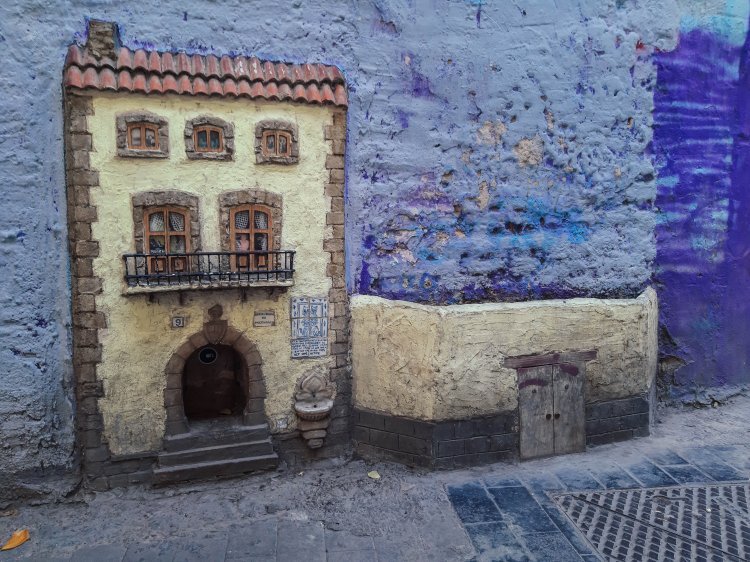 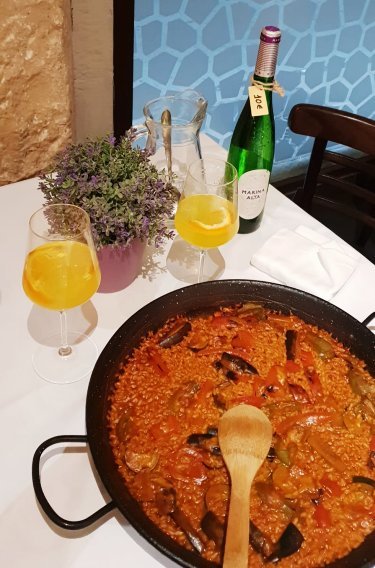 Eat paella where it was invented

Anywhere you go in Valencia you’ll find people eating one thing in abundance – paella. In fact, if you’re in a restaurant of an evening and you look around you’ll probably find it difficult to find a table of people not sharing a huge paella dish. That’s because this is the birthplace of the famous Spanish food. Valencian paella is the traditional one, which contains rabbit and chicken, but you’ll find options everywhere you go. There are many types of seafood paella on offer and even veggie options.

A couple of things to be aware of, it takes 40-45 minutes to cook so if you’re British and eating at 10pm at night like the Valencians already has you feeling famished, maybe get that starter! Especially if you choose to wash it down with a jug of deceptively named, Agua de Valencia (a traditional cocktail with orange juice, gin, vodka and cava), but is delicious!

For the best paella in Valencia head to La Riua – but book a table in advance as they have limited opening hours and it’s extremely popular with locals and tourists alike!

Remember I mentioned the neighbourhood where you can find the cat house? Well there’s plenty of other gems to also be discovered in the district of El Carmen. Not least some interesting architecture, colourful buildings, quirky cafes and some of the best street art you’ll find in an European city. A gentle meander through the backstreets without any real purpose is a morning well spent and you’re bound to stumble across a number of hidden gems. 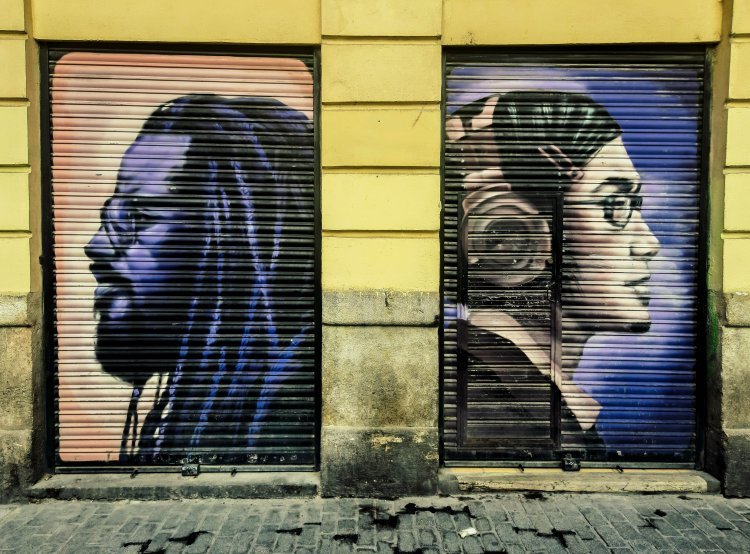 Climb the tower at Valencia Cathedral

While you could pretty much spend your whole weekend going around Valencia’s churches, visiting the main one – the cathedral – is a definite activity to add to your itinerary. The scale of the building is so impressive, and the vaulted ceilings and incredible decorations make it quite a spectacle. You can also go down into the crypts and explore a small adjacent museum with some of the old treasures.  The cathedral is perhaps most famous as being the home of what is thought to be the Holy Grail. As you might imagine it’s not the only chalice that makes this claim, but it’s by far the most famous.

Another great reason to visit the cathedral is for the experience of climbing the two-hundred-and-something steps up to the top of the Miguelete Bell Tower. It’s not for the faint-hearted but you’ll get a great view over the city. It’s a shame that the safety netting comes up a bit too high to get a decent photograph if you’re not tall like me! 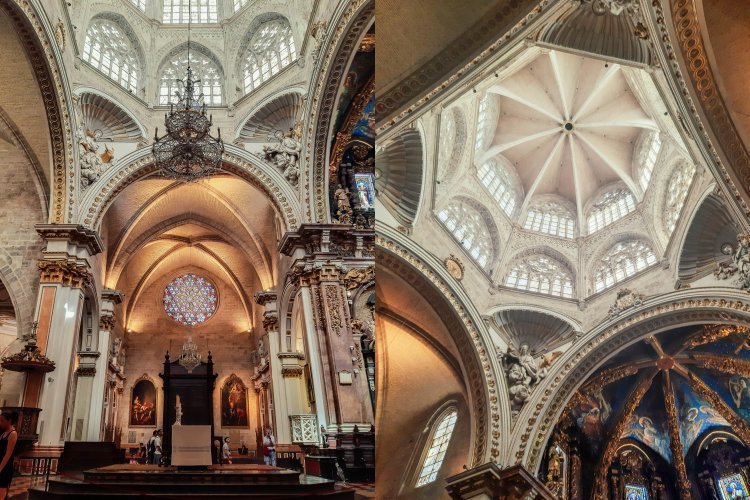 Explore the park that used to be a river

When you first set eyes on a map of Valencia one of the first things you’ll undoubtedly notice is the large and unusual shaped park that runs along one side of the city all of the way out to the coast. It makes a lot more sense when you realise that it used to be a river! Turia Gardens were built on the former riverbed of the Turia River and provide over 9km of green space in the city – making it one of the largest urban parks in Spain. The gardens are home to some of Valencia’s attractions (including the museum complex at the City of Arts and Sciences) and it is also ideal if you want to hire a bike and ride from the city to the beach in a safe, leisurely manner. 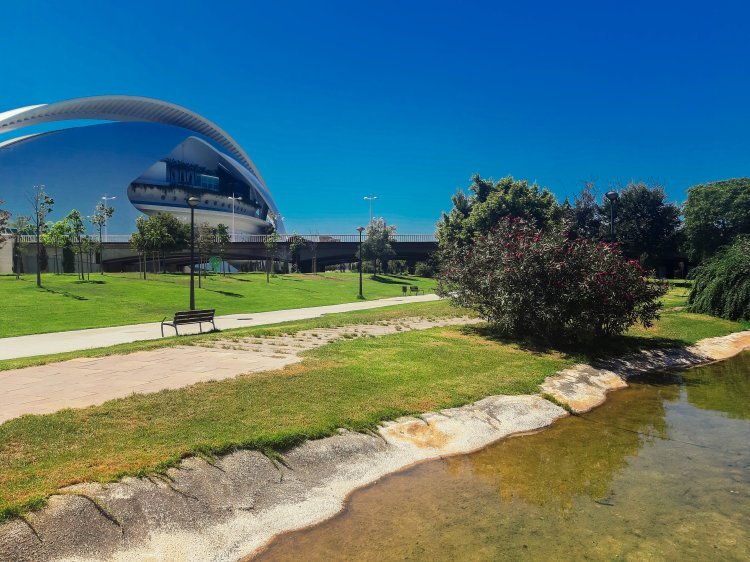 Having now been to Spain’s second and third city, I think it’s about time I went to Barcelona, right? 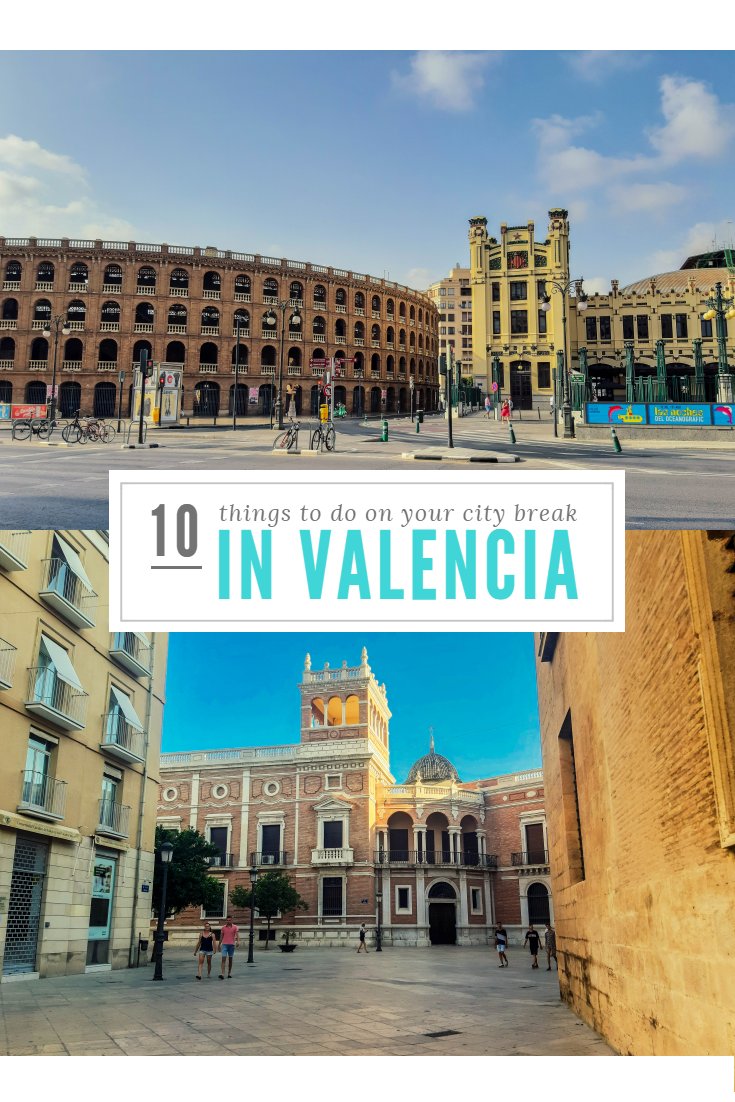