Last month I took my first (and probably last for a while) European city break, spending a long weekend in Prague with two friends. During that time we managed to squeeze in a surprising amount of sights – thanks to an excellently-located Airbnb and a lot of walking! Here’s a brief rundown of some of the things you absolutely should add to your to-do list when you visit.

One of the best ways to kick off your weekend in Prague is by taking a free walking tour. This gives you a really good grounding of what there is to see and do in the city and is also great for helping you locate everything! You’ll also find tour guides give you the best food and drink recommendations (more on that later) because they know the city inside out and they can tell you where the locals go. I can personally recommend the tour we took, which is run by Discover Prague and runs regularly between 10am and 2pm every day outside the tour office in the heart of the Old Town. You do need to book so they are aware of the numbers but the tour is ‘free’ (which means you tip your guide at the end).

Often described as one of the most overrated tourist attractions in Europe, the medieval astronomical clock that takes pride of place in the Old Town Square is still worth seeing. Dating back to 1410, it’s the oldest astronomical clock in the world still operating and really quite an impressive piece of machinery. There is an hourly ‘show’ where figures move around the clock which attracts huge crowds, but unless you’re in the area at the time, it’s not really worth waiting around for.

If you’re spending a weekend in Prague, the city’s long Jewish history is something you’ll find hard to escape, and it’s worth learning more about. The former Jewish Ghetto begun in the 13th Century when Jewish people from around the city were forced to relocate to one specific area. They were banned from living elsewhere, so this area became very crowded as new arrivals who had been expelled from nearby Germany, Austria, Spain and Moldova came to join them. The sheer abundance of Jewish people living in the area throughout history explains why there are six synagogues still in the area – many of which are open to the public and contain interesting displays and artefacts from the history of the people who lived there. These buildings and artefacts survived WWII due to Hitler’s decision to preserve Prague’s Jewish Quarter as a ‘museum of an extinct race’. This is also why you can see many Jewish objects from outside of Czech Republic, which were transported here as part of this plan.

Prague is a city of many bridges but the most famous is Charles Bridge. I was forewarned about how busy Charles Bridge gets in the day but still unprepared for exactly how many people are walking across it at any one time – to see it at it’s best I’d recommend going as early as possible! The bridge isn’t just a tourist attraction but it’s a link between the side of the river with the castle and the main hub of the Old Town, which is why you’ll probably find yourself crossing it at least a couple of times during your weekend in Prague. As you cross over take note of the statues that decorate either side – there are over 30 of them in different styles and they all have different interesting stories behind them, which you can find in a guidebook or online!

Tucked away in a small square at the end of Charles Bridge is another popular tourist spot – a wall covered in art dedicated to and inspired by musician John Lennon. The first piece of artwork to appear on the wall was an image of the iconic singer-songwriter following his assassination and since then it has become a site symbolising protest. The wall was a sore point for the communist regime in Prague in the late 1980s, who repeatedly tried to repaint it, but found it soon filled again with anti government slogans, messages and artwork. Following repeated vandalism and destruction, since late 2019, the wall has been monitored and the artistic section protected. It’s still possible to write on the wall but in specifically designated areas only.

One of the most interesting architectural buildings in the city is the Dancing House. It’s a little walk from Old Town but I’d recommend going for a walk along the river to see it (the walk is pretty nice too!) The house is comprised of two halves, which are supposed to represent a pair of figures dancing. It was originally supposed to be called the Fred and Ginger house – and is sometimes still referred to this way – but the architect changed his mind as he didn’t want to impose anything too American on the city. When it was constructed in the 90’s, the building was controversial due to its very different style, compared to Prague’s famous baroque and gothic style buildings. However it’s become a popular tourist draw thanks to its unique standout design.

Don’t be fooled into thinking that the castle is something you can quickly tick off your list during your weekend in Prague. This area is actually a whole complex of buildings, and the largest ancient castle in the world, with a fort, medieval castle and the offices of the President of Czech Republic. If you want to see it all properly you’ll need to put aside at least half a day, but it does get extremely busy and the security gates that you need to pass through to enter the complex can have huge queues. If you’re short on time like we were and fancy seeing a different side to the castle without all of the crowds then you might fancy doing what we did and booking a small group evening tour. In my opinion this is one of the best ways to visit the area as you get to find out so much about the history (and also current politics) that you just wouldn’t know otherwise. Just a warning though the tour doesn’t start at the castle! We made the mistake of walking all the way up there without checking the booking confirmation and you actually meet in the Old Town and ride the tram to the top.

The Petrin Tower is situated high at the top of the Petrin Hill and can be seen from almost any spot in the city. The most obvious thing about it is that it looks a lot like the Eiffel Tower. You might also hear residents of Prague claim that it’s taller than the Eiffel Tower… which it is if you include the hill it stands on! As it stands so high you can get one of the best views of the city by visiting the observation deck, which is a challenging 299 stairs up to the top! To save yourself for this task I’d recommend taking the funicular up the Petrin Hill to reach the tower over walking up. The queues can be quite long (even in the winter months like when we were there!) but they do move quickly. Be aware that you have to purchase a ticket from the yellow machines inside the building where you catch the funicular before travelling. These are standard public transport tickets – the same you’d use to catch the bus or tram – and are activated when you first stamp them for a certain period of time.

At the top of Petrin Hill you can also visit Strahov Monastery. As we went quite late in the day we didn’t actually have much time to explore the monastery but apparently it has a beautiful baroque library. But it’s not just books that are worth checking out here – one of the most unique things about this monastery is that they have an on-site brewery! We ate dinner at the on-site restaurant which is really atmospheric, and of course had to sample some of the homemade brews, including a tasty seasonal cherry beer!

Is it long enough to spend a weekend in Prague? If you’ve been, do you have a recommendation to add to this list? Let me know in the comments. As always I’m also happy to answer all your Prague-related questions… including which beers to drink! 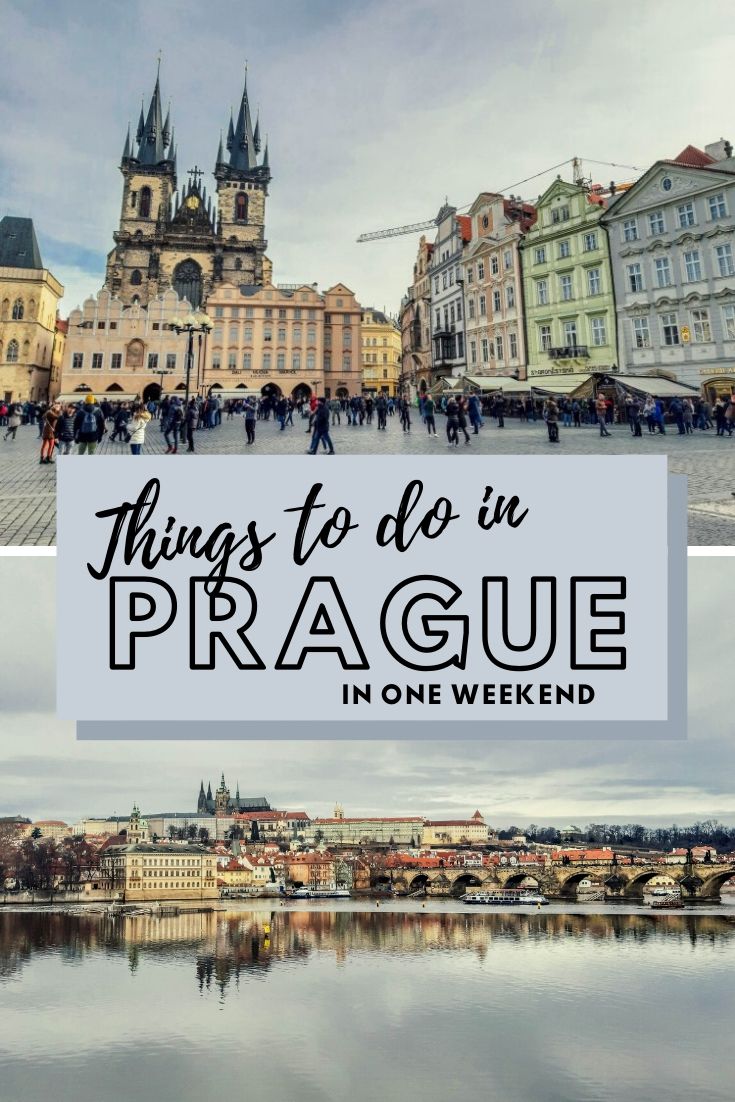 A communism tour if you’re into that and the opera!

Great suggestions! We actually went to the Czech Opera too while we were there – the building is incredible!